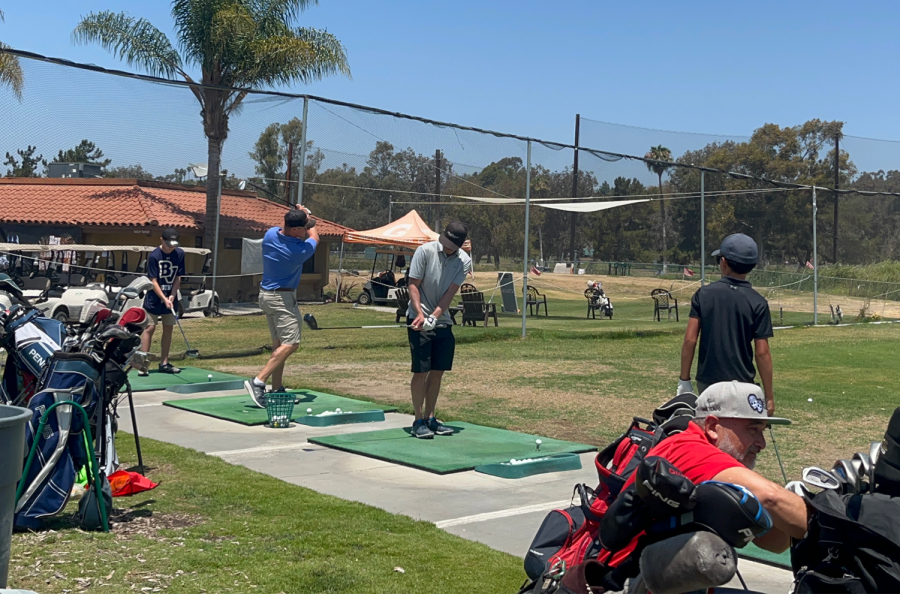 After registering for the Bonita Vista High football golf tournament, players warmed up at the driving range. Registration opened at noon and the tournament began at 1 p.m.

On July 15, the Bonita Vista High (BVH) football program hosted their first Golf Tournament Fundraiser at the Chula Vista Golf Course–a tradition that has been dormant for over 10 years.

Tournament registration opened at noon. After a shotgun start at 1 p.m., 111 golfers set off to play 18 holes over the next five hours. Following the tournament was a banquet where the tournament champions–Shawn Boden, Josh Neil, Scott Habibi and Donny Samporno–were crowned, players and their families were served dinner and raffle winners were announced.

“The purpose of [the tournament] is to get the community involved with Bonita Vista High School and [the] Bonita Vista football [team]. It’s not a fundraiser with the same parents, we’re expanding out and having the camaraderie there,” BVH Athletics Director and Head Football Coach Tyler Arciaga said.

The Chula Vista Golf Course was closed to the public from 9 a.m. to 4 p.m. with 18 holes open to the registered players. Each team of players, or foursome, began at a different hole, allowing all players to begin at the same time. The competitors had the opportunity to win various contests such as Closest to the Pin, Longest Drive and Hole-in-One.

“Everybody here has a competitive edge to them and wants to do well. Nobody wants to be in last place, but at the end of the day, this is a fundraiser for a high school athletic team and people realize that,” Arciaga said.

The winning foursome of the overall tournament won 16-under 73, meaning they completed the course in 57 strokes. Boden, who has 33 years of golfing experience and has played in Professional Golfers’ Association events, did not have high expectations for his foursome before the tournament.

“We didn’t think we would win but we scored really well today,” Boden explained. “I just wanted to have a good time and donate some money, so we could contribute to the good cause,” Boden said.

The runner-ups, Mike Barbary, Anthony Chance, Cole Neil and Brennan Quigley, share a similar sentiment. By the end of the tournament, they had shot 13-under 73, meaning they completed the course in 60 strokes.

“We definitely did not come here thinking that we would be runner-ups. We came here to have a great time as friends and [build] close brotherhood on the golf course,” Neil said.

In the Closest to the Pin contest, Chris Cuygan shot closest to the pin on hole four, Ed Fletcher on hole nine and Chad Kavangh on hole 15. On hole 12, EJ Stoike shot the longest drive. Though the tournament champions and runner-ups received a plaque and qualified for the Randy Jones Invitational, Boden explains he achieved something greater.

“Bragging rights! Recognition is all I need,” Boden states. “I come in second and third [place] all the time in these fun tournaments and this one we finally won. To me, that’s the coolest prize of all.”

“We all reached out to people we know that play golf. We put it on social media [and] one person reached out to us through Offer Up! I don’t know how that even happened,” BVH football Booster Club President Nicole Colmenero remarked.

Of the 120 local businesses contacted by the Booster Club, 19 businesses offered their support for BVH by sponsoring a hole. Overall, approximately $10,000 was raised for the BVH football program. The proceeds from the tournament are going towards new gear and travel costs for the team.

“We’re in dire need of updated shoulder pads and helmets. There’s not a lot of money allocated in the athletics budget to compensate for all of that,” Arciaga explained. “Having generous businesses donate their precious resources to a cause like ours, we’re really humbled by that.”

According to Arciaga, this fundraiser was started by Carl Perrick, a former BVH football coach, in the mid to early 90’s. Arciaga states it was “the biggest fundraiser for the football program” during his time as a student at BVH.

“Arciaga being an alumni is part of [the reason why we brought the fundraiser back],” Colmenero said. “Some of our uniforms and practice jerseys this season are throwback designs, so we’re bringing it back to what [Arciaga is] familiar with.”

Going forward, Arciaga intends to bring the tournament back in future years to function as a fundraiser and reunion for former and present BVH students and football players. Mike Barbary, a player in the runner-up foursome, hopes to return next year to claim the champion title.

“What we won is a foursome to come back to the Chula Vista golf course, where we can redeem ourselves for this runner up trophy,” Barbary explains. “ We intend to seek redemption next year.”