Titan of auto-repair retiring after 24 years 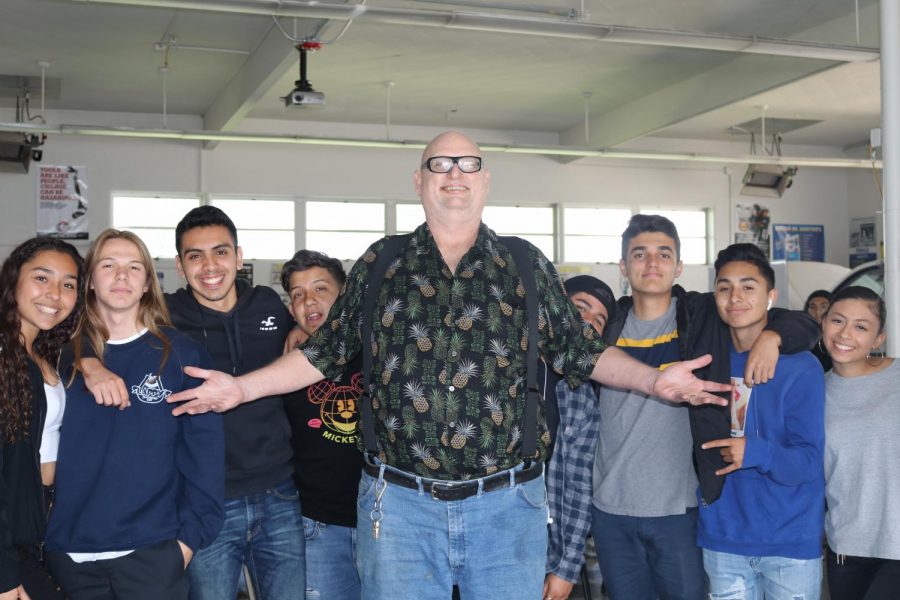 Ben Hazel poses with his sixth period students during his final days teaching at Bonita Vista High. He prepared the auto shop for the next teacher to take over.

After walking to the far end of the Bonita Vista High School (BVH) campus and entering through a dark blue door, one arrives at the auto shop, where retiring BVH teacher Ben Hazel has spent the last 24 years.

“When I first found out about Hazel’s retirement I heard it from a fellow peer. I thought it was a cruel joke that he wanted to play on me because he knew I loved Hazel. The next day I heard the news myself and I was crushed, I even cried,” sophomore Ashlie Hunter said.

Although this marks the end of his time as a teacher, Hazel still intends to work with cars and students in the future by volunteering at auto shops during retirement.

At BVH, Hazel worked to transform the auto shop into a fully functioning system with all the necessary tools needed for his five automotive technology courses.

“When I first showed up, the place was a mess, the only tools that were there were a claw, hammer and a screwdriver. Over the past twenty years I’ve written grants, and gotten a lot of support from Career and Technical Education (CTE) and had the place painted up and workbenches put right. It looks like a professional dealership now and I’m real proud of that,” Hazel said.

Beyond that, Hazel brought race car building and racing opportunities to some BVH students. For four years he helped a team of BVH students race cars they built against NASCAR teams, an experience which he described as a highlight of his time at BVH. Hazel stated he misses participating in the competitions ever since SUHSD principal Ramon Leyba shut it down last August.

“[My students and I] won a race, and the car was built by 16 and 17-year-old kids named Cara Banks and Anthony Montenegro. There have been some of my students who have won competitions in the past. Over the years of my career and entering races I have collected a dozen or so trophies thanks to the kids,” Hazel said.

Although Banks and Montenegro were considered young for the competitions, competing against professional NASCAR drivers, they were still able to reach these accomplishments with the guidance of Hazel. Hazel’s students describe how he brought opportunities to his students to not only learn about cars, but also have the ability to make a career from it. An example of this was one of Hazel’s students going on to own a car dealership and becoming a millionaire, according to Hazel.

“Getting to know cars inside and out in [Hazel’s] shop prepared me for a career. I became a used car manager for a franchise store by the time I was 22 and a director of seven stores by the time I was 26,” 1999 BVH graduate Matthew Uribe wrote to Hazel in facebook message. “I never got to thank you and I personally know a few guys that make a living now, using things they learned in your shop. I hope you know how many lives you’ve helped over the decades!”

Hazel added that BVH should have a larger selection of hands-on electives that teach students a valuable trade. He believes his classes are rewarding for any students by giving them workplace experience and teaching them how to take care of their own cars in the future.

“I have always credited myself in the fact that my kids learn professional behavior, how to behave in a workplace. Everybody that has the slightest passion for cars can, when they graduate from my class, earn $14 an hour changing tires at any local tire store,” Hazel said. “I have passionate students who can turn the class into a career.”

With key lessons embedded in daily catchphrases, according to his former student Anthony Santos, Hazel taught his students to “improvise, adapt, and overcome,” and to “not be a jerk.”

“He impacted the kids that weren’t going to college right after high school. He changed their minds and a lot of them went into the automotive industry,” Santos said.

Several of Hazel’s former students, like 2004 BVH graduate Abraham Osuna, have had success in the automotive industry and credit their former teacher for sparking their interest. Many were unaware of what they wanted to do in the future, but were given a direction because of the class.

“I really get a chance to get to know my students pretty well. I have students that I’m still in touch with on Facebook from over 20 years ago. I’m going to miss those kids. I’m gonna miss you guys,” Hazel said.

Many of Hazel’s students, like Emily Willmon, Abraham Osuna and Uribe, have stayed in contact with him, updating him on their careers and accomplishments.

“Mr. Hazel was a strong male figure for a lot of students at Bonita. He created a safe environment where students could safely express themselves. Hazel was always available to talk to as well, he was truly was an emotional resource to students on campus,” Hunter said.

Hazel had planned to stay at BVH for 10 more years, but suffered three injuries at work to his shoulders and knees, and is having several surgeries which will require years of recovery. There will be a new auto shop teacher for the next school year according to BVH principal Roman Del Rosario, Ed.D.

“With Hazel’s retirement, Bonita will definitely be losing a world-class amazing gentleman. Undoubtedly, one of Bonita’s best teachers will be missed by his past students and any future auto shop students—if there is still a shop left, will never have the experiences that I was fortunate enough to live through,” former BVH student Alfonso Munoz said.

Hunter stated that Hazel provided emotional support for students, a reliable teacher that would offer an open ear and advice to anybody. He believed a strong relationship with his students was essential during his teaching career.

“Myself and so many other students love you to the moon and back. I’m truly devastated to see you go but I can honestly say I wish you the happiest retirement. Know that the place I hold you in my heart can never be replaced by no math teacher, no English professor, not even a choir director,” Hunter said.