Changing the conversation around climate change 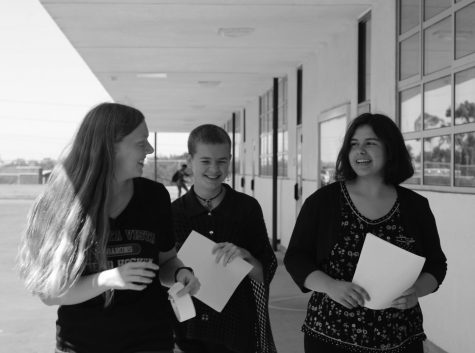 Gloria IngLilian Landre (center) walks around campus with Katherine Nixon (left) and Ivana Bobadilla (right) during lunch. THey are hanging flyers around campus to pormote the upcoming Global Climate Walkout taking place on Sep. 20, 2019 during sixth period at BVH.

Currently, the environment is increasingly becoming a local, national, and global topic of interest, appearing in many political debates around the world. In the Bonita Vista High community, Green Team club President and senior Lilian ‘Lily’ Landre is a strong advocate for spreading awareness about climate change.

As the president of the Green Team club, she embarks on a multitude of tasks that advocate for the environment. Her projects include spreading awareness about recycling, community and beach clean-up sessions, as well as setting up “green walls” around campus, which are propped-up wooden pallets that house succulents.

Landre is currently participating in the San Diego 350 (SD350) Climate Change Action Walkout, which is a movement “to prevent the worst impacts of climate change and climate injustice through education and outreach, public policy advocacy, and mobilizing people to take action,” according to the SD350 official website.

“I wanted to help start a walkout for climate change at our school, and [SD350] had the resources to help students organize for events like that,” Landre said.

As previously mentioned, Landre desires strong environmental change, which is the primary motivation behind her climate change-related activities.

“I believe that bad things are going to happen to us, specifically with younger people, because we are disproportionately affected by climate change. We all have long lives ahead of us, but we won’t have a good experience if climate change continues to speed up,” Landre said.

Within the SD350 Climate Change Action Walkout, Landre primarily participates in the youth program activities. However, she also contributes to other forms of visual media, such as music and art.

“I think she’s been very thoughtful. Also, she did contribute at the art event last weekend. She was our DJ for several hours,” SD350 Executive Director Masada Disenhouse said.

In addition to the youth programs within SD350, there are further, underlying implications behind her contributions.

“The most important thing she is doing is organizing students at your school. I personally [and] strongly believe that […] there are short amounts of time to start bringing down greenhouse gas emissions if we want to avert the worst impacts of climate change,” Disenhouse said.

Disenhouse agrees that awareness is imperative in finding a solution for environmental issues. Landre demonstrates this concern through her club, as well as her involvement in events like the SD350 Climate Change Action Walkout. Furthermore, as the opportunity for environmental change becomes slimmer, Disenhouse believes that it ultimately boils down to the youth to carry on leadership for the future of environmental well being.

Landre strongly advises others to start considering what they can do to prevent climate change from endangering our future. Although there are barriers to her work, she discovered ways to maneuver around them.

“She is definitely very invested into it. Even though she is not in the [International Baccalaureate] IB program, she went as far as taking the initiative by taking IB Environmental Systems and Societies (ESS) course. Her actions inspire me because it shows me that I can do something about climate change and that I don’t just have to stand around and do nothing, but [that] I can actually take a step forward and do something that I care about,” BVH senior Ivana Bobadilla said.

With any one individual taking charge of the situation, Bobadilla agrees that the energy will soon spread throughout the community. Landre hopes that the Global Climate Walkout specifically, will inspire change as well.

“I hope it will raise awareness on the urgency of the problem so that people will start taking action and change individual habits in their lives that can prevent further climate change,” Landre said.