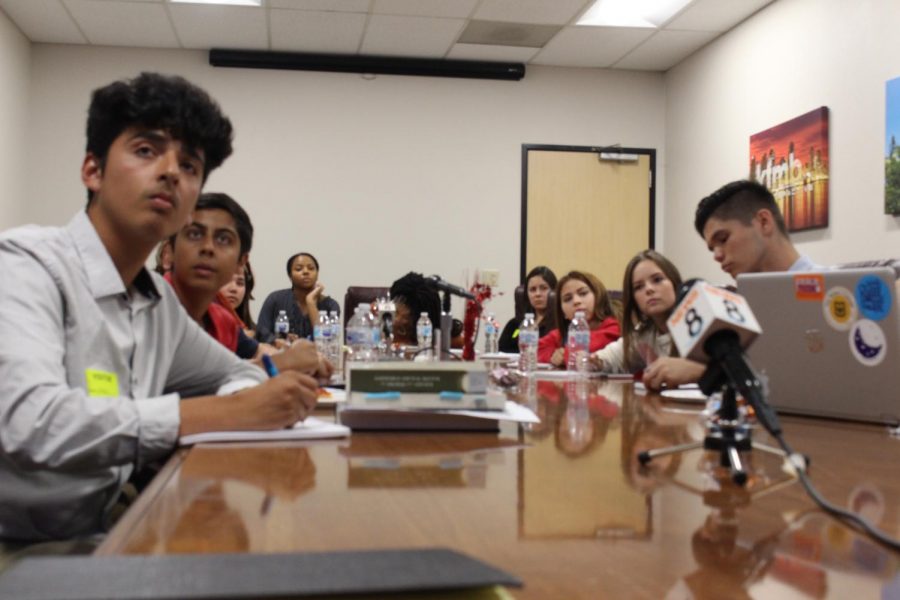 Students from all over San Diego County participate in the student panel to discuss the democratic presidential debate. The students took notes on the candidates’ proposed policies to later be discussed during their break.

Bonita Vista High (BVH) students participated in a discussion panel hosted by CBS News8 on Tuesday, Oct. 15 to watch and discuss the democratic presidential debates. The students from both BVH and other schools in San Diego county will be first time voters in the 2020 presidential elections. CBS News8 will follow them from now until then.

“[News8] wanted to be able to expand [the presidential election] and really hear from a community that I think is rising, and a lot of people want to hear from [but] then they don’t have those avenues. So we thought, let’s follow first time voters, in particular the youth,” CBS News8 reporter Abbie Alford said .

The panel that BVH students participated in watched the democratic presidential debate live in a room at the News8 station. During the debate’s breaks, the students would discuss about the topics mentioned in the debate. They would be filmed throughout the debate and their discussions.

“If you look at statistics, the majority of voters are people over 50 and the most underrepresented voters that show up at polls are people from ages 18 to 24. Ever since I was a kid, I couldn’t wait to vote because I think that our generation grew up in a world that was very different than our parents, so our beliefs and our standpoints wouldn’t be the same as someone who’s 50,” BVH senior and Green Team member Charlsie Santana said.

Santana was a student that was invited to be apart of the student panel. In fact, the entire Green Team was invited to partake in the panel, although only five students from BVH joined, including senior Melanie Garcia.

“I haven’t been really deep into politics. So I wanted to get the experience and see other people’s point of view besides people around me and my family, since everyone has the same point of view in my family,” Garcia said.

During the discussion over climate change, a debate arose between the BVH students, some of which were in the BVH Green Team, and another student.

“He disagreed with us that climate change was something that’s happening and affecting us. It really bothered us because it’s something we can actually see it happening,” said Garcia. “I really disagree that we aren’t making a change for ourselves, and he was pulling out all these statistics out of his head that weren’t making any sense,” Garcia said.

At the end of the event, Alford went around asking all the students that if they had to vote for anyone at all who they vote for. Santana replied with Alexander Yang, Elizabeth Warren and others of the like. Garcia said that she would vote for Bernie Sanders.

“My opinion on Warren changed throughout the discussion. I would have voted for her before because I thought she was really representing us as the middle class, but as soon as I heard her speak, I didn’t want her to represent the country or even me. She didn’t seem very knowledgeable in what she was saying, and I didn’t like what she was trying to put upon everyone there, especially on Medicare,” Garcia said.

While some students like Garcia had a complete change of opinion, some students like Santana had their minds change but not completely. According to Santana, she liked Warren’s plan on taxing the wealthy, but was still unsure how Warren would accomplish it without also raising taxes for the middle class.

“I think it’s an incredible experience, and I think a lot of people no matter what age can learn a lot from what we discussed tonight. I just love the fact that students are engaging with each other and doing it in a positive and meaningful way,” Alford said.