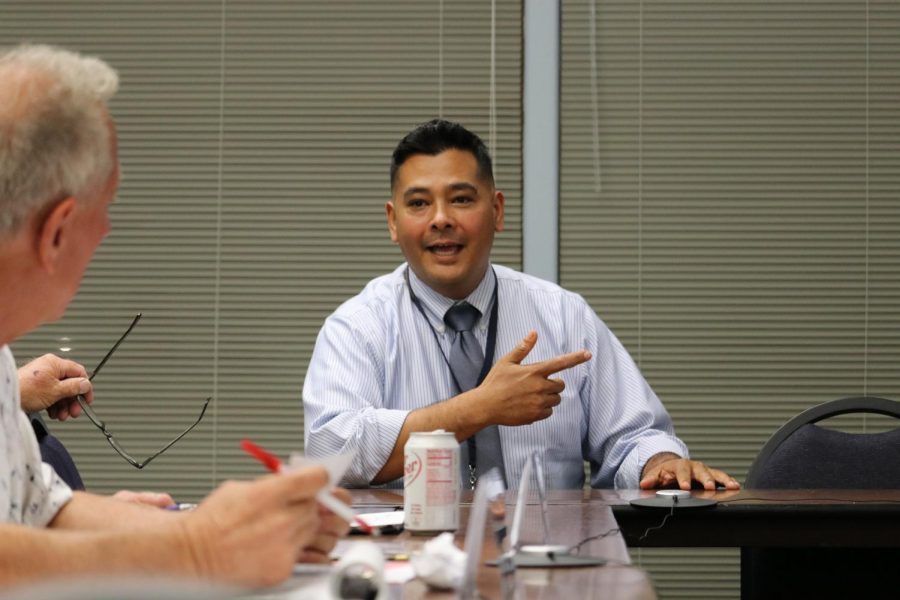 BVH Principal Roman Del Rosario speaks in support of a project recommendation which would "combine 3 funding sources for the BVH Track and Field Project" according to the Facilities Subcommittee meeting agenda of Nov. 4. Del Rosario worked on this proposal with SUHSD Director of Planning and Construction Janea Quirk and the Bonita Vista Middle Principal, as the plan entails BVM funds reallocated to BVH's project.

On Nov. 5 Sweetwater Union High School District (SUHSD) board officials, administrators and community members trickled into a conference room of SUHSD. The latest proposed plan would allocate 16.6 million to the Bonita Vista High (BVH) track and field project, from the combined budgets from Bonita Vista Middle (BVM), BVH and the balance of the track and field budget.

Director of Planning and Construction Janea Quirk opened the meeting by outlining the plan recommendations that will go to the Board of Trustees for approval on Nov. 12.

“If you would’ve asked me two years ago if I approved this plan, I would’ve abstained. But we’ve talked to hundreds of stakeholders and really thought this through,” BVH principal Roman Del Rosario, Ed.D. said.

Typically, there is apprehension surrounding the transfer of funds from one campus to another, as both have needs for construction. However, Quirk confirmed that BVM sports teams will have access to this new facility for their activities and that the BVM principal agreed to the proposed plan.

“No principal is really comfortable with moving funds from one site into another, but we realize that these students are likely going from BVM to BVH, so it’s a win-win,” Quirk said.

The renovation design will include an astroturf field and a synthetic nine lane track that is CIF eligible. It is currently set to accommodate approximately 1500 spectators for an event.

However, the new design will not end BVH football’s dependence on the Southwestern College (SWC) football field. Quirk predicts that the team will still need to use their field for four to six home games because the capacity of the proposed future field and bleachers would not be able to sustain the amount of people necessary.

“The renovations do not [solve for BVH’s dependence on SWC]. In order to do that, we would need more funds,” Quirk said.

For bleachers, it would cost anywhere from two to four million more dollars to add the amount of bleachers necessary for full capacity, money that SUHSD does not have. BVH currently pays six thousand dollars to rent Southwestern College’s field and bleachers for every varsity football home game; the plan will not eliminate this expense.

“We are trying to get the capacity to be as big as possible, while still remaining within our budget,” Quirk said.

Many BVH parents that were at the meeting expressed concerns over the effectiveness of the new renovations due to the fact that the football team will still be using SWC’s facilities.

“The whole idea is to give them home-field pride, and we’re not even doing that,” BVH parent Al Sides said. “[BVH] is where they are, that’s their home.”

One BVH parent in particular, Kathleen Yetter, felt that the plans would be beneficial for the students.

“I actually believe that this plan will move us forward,” Yetter said. “The idea of having artificial turf excites me.”

BVH parents in attendance of the meeting had opposing perspectives on the proposed plan for the football field, yet they all agreed on one common idea: BVH’s campus needs attention.

“Bonita Vista High School is a gold star that looks like it belongs in a third-world country,” grandparent of a BVH student, Kathleen Cheers said.

Del Rosario continues to support the plan, stating that “the community has waited long enough” for a change like the one that has been proposed. However, the challenge to address the continued budget struggle remains.

“I know that these are hard conversations to have, especially since they are [public] projects, but we want to keep the public and the taxpayers in mind when we make these decisions,” Quirk said.