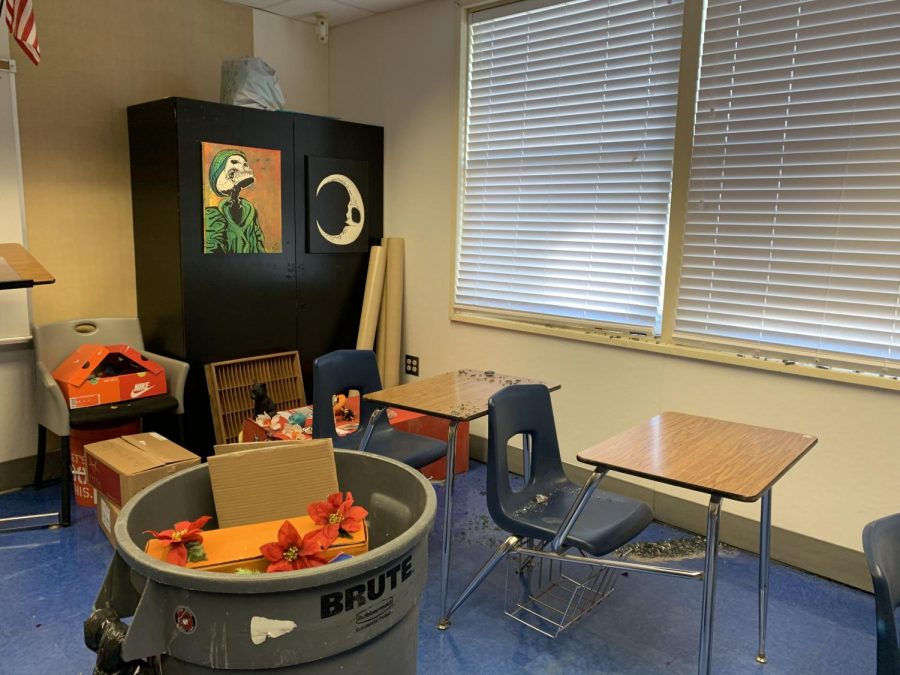 Room 802 as discovered by de la Cruz the morning of Nov. 4, 2019. In the trash bin is a student altar thrown away due to damage from the shattered glass.

On the morning of Nov. 4, two shattered classroom windows were discovered by AP Spanish Language, Spanish 3-4 and Spanish 5-6 teacher Maria de la Cruz. De la Cruz’s room, 802, was vandalized over the weekend, although nothing further is confirmed.

After discovering the two busted windows, de la Cruz sent her first period class to another classroom as Assistant Principal Carlos Siragusa and a BVH Campus Assistant helped de la Cruz clean up the shattered glass. Siragusa and Paniagua were unavailable to comment.

“They were wonderful,” de la Cruz said. “They just knew what to do. And they just started with the cleanup and they just took care of everything.”

Nothing appeared stolen. However, apart from the windows some student Day of the Dead altar art projects were thrown away due to an excess of shattered glass. De la Cruz celebrated Day of the Dead with her students on Friday, Nov. 1.

“Some of our altars, they were so full of glass that they had to be trashed. You have to understand these are the altars on the Day of the Dead that my students worked so hard on. I think that’s what hurts me the most, that there are projects that were literally destroyed,” de la Cruz said.

De la Cruz’ windows have temporarily been boarded up, and will be fixed in the coming week. Nothing is confirmed about the vandalism, although de la Cruz turns to social media for the answer.

“Social media is a very powerful thing. And I know that little by little, it’s all going to come to the surface, and we’re going to find out who it is,” de la Cruz said. “Time will tell. It always does.”