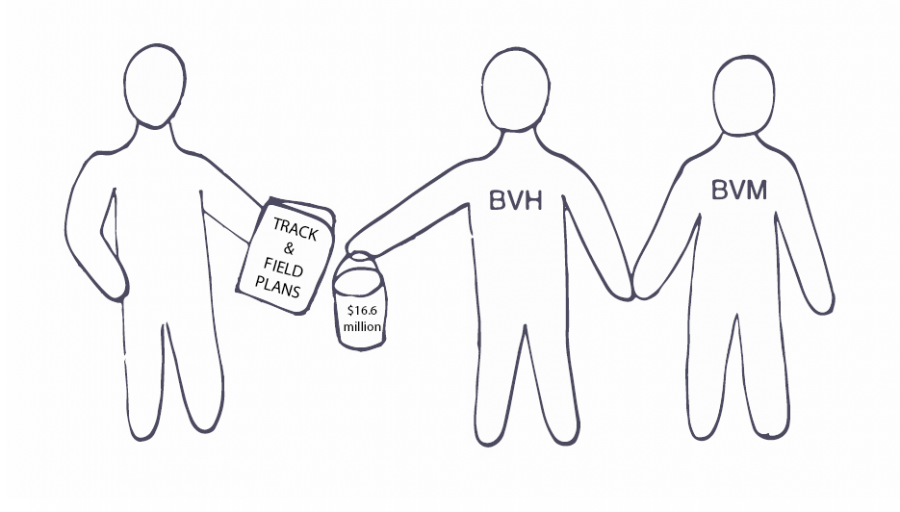 Recently, on Nov. 5 the Sweetwater Union High School District (SUHSD) board officials and members proposed a plan that would issue 16.6 million to Bonita Vista High’s (BVH) track and field project. The presented plan would be transferring funds originally allocated towards renovating the 600 buildings at both Bonita Vista Middle (BVM) and BVH with regards to a new track and field for the high school. Although, it might sound like a pleasant idea, passing the suggested plan is not a priority and would only intensify the emphasis on sports in BVH, which diminishes the true purpose of students being in school.

Our culture has made sports the number one priority at BVH. The high prioritization of sports in American high schools may be linked to our international student achievement ranking and general decrease in performance. The U.S. News & World Report claims that, “55 percent of high school students participate in some type of sport, which amounts to almost 7.6 million people nationwide.”

Based on the distribution of the money for the new track and field project, the millions of dollars from the proposal could have been used to enhance the academics and learning environment of BVH, which is what students are there to do. Incorporating good classroom and school design through school renovation would have multiple benefits.

According to SMT, one of the United Kingdom’s leading media publishers in the education sector, “renovating classrooms will give schools an opportunity to cast away that ‘outdated’ persona and embrace a new technological age, in order to help convince children that learning can be a thoroughly enriching and exciting experience.”

When a school renovation project or upgrade is undertaken to existing buildings, it will not only enhance school facilities but also students’ academic performance. Salford University conducted research over a year with 3766 pupils to discover how design and environmental factors for school buildings and in classrooms can affect children’s results. It was found that “well-designed primary schools can boost children’s academic performance.” Furthermore, based on the results of the Holistic Evidence and Design Project (HEAD), it was found that there is “clear evidence..that well-designed primary schools boost children’s academic performance in reading, writing and maths.”

Not only that, but the BVH athletics department dominates attention among the high school community overall. But to a large degree, the emphasis on sports often drowns out the importance of education in academic life. The amount of time, energy and money put into sports at every level of our educational system compared to core academics is concerning. Students join extracurricular activities such as the speech and debate team, the vocal music department, and band,  yet the reaction of the school as teams bring home the gold will be complete silence since everyone will be too busy at the football pep rally.

This attention to sports brings a lot of involvement; from pep rallies, to practices, to support from students at the games. These activities distract students from their academics, and the numbers do not lie. The United States ranks 31 for international student achievement tests in mathematics, compared to countries such as South Korea and Singapore all of which are leading globally. Countries like South Korea and Singapore don’t emphasize sports in their educational systems, unlike the United States.

According to Amanda Ripley from The Atlantic, “Sports are embedded in American schools in a way they are not almost anywhere else. Yet this difference hardly ever comes up in domestic debates about America’s international mediocrity in education.” A study found that when removing sports programs from a struggling school district in Texas, student achievement improved drastically in a year-over-year comparison, in addition to student behavior and parent involvement for academic support.

As, Elise Patkotak, a writer for Anchorage daily news puts it, “Schools should celebrate athletic achievements, but not to the detriment of their main focus, celebrating academic achievement.”

Sporting events have been deeply ingrained in BVH’s culture for many decades, but high school sports have become so popular that they are beginning to diminish the real reason that students go to school. High school sports have gained too much emphasis in our high school’s community, as academics have taken a back seat. Although, refurbishing BVH’s track and field might seem like an acceptable idea, passing the suggested plan is not a prime concern and would only reinforce the emphasis on sports in BVH, which diminishes the genuine reason of students being in school in the first place.