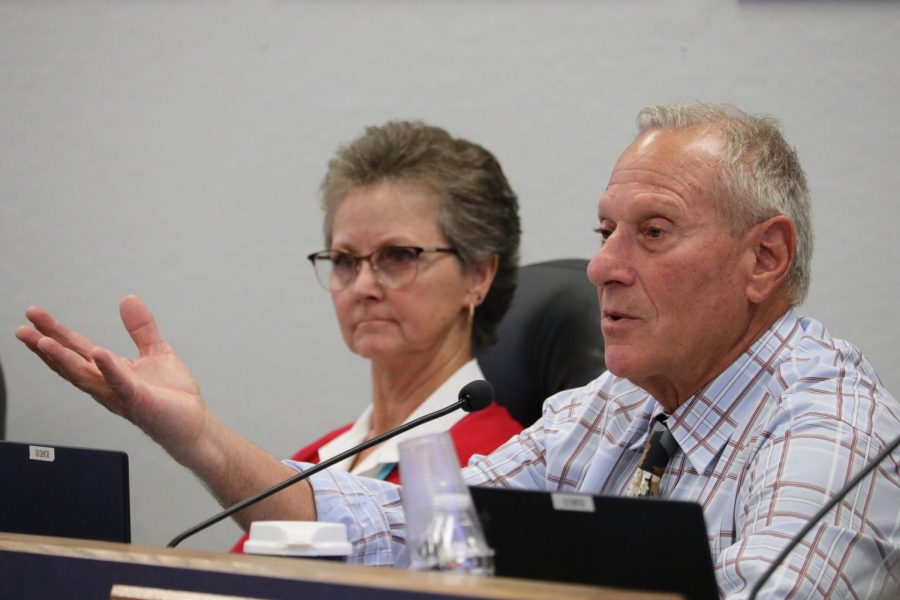 SUHSD Board of Trustees Vice President Frank Tarantino acknowledges BVH principal Roman Del Rosario, Ed.D for his communication with the BVH community before working to help to create the BVH Track and Field Proposal. At a previous meeting, Del Rosario spoke about his focus on providing what the majority of the community wanted.

Excited chatter buzzed around the boardroom on Nov. 12,  as the public audience anticipated the entrance of the Board of Trustees. On this evening, item M-1 on the agenda would be one of the highlights of the meeting. It was after a lengthy, passionate discussion on the Sweetwater Union High School District’s (SUHSD) latest proposal to reallocate funds from Bonita Vista Middle (BVM) and Bonita Vista High’s (BVH) other projects to a new track and field for BVH, that the Board of Trustees decided to vote 5-0 in favor of the plan.

In contrast to the passing of the proposal, there was opposition to the plan. The Oversight Committee has contacted the SUHSD several times inquiring about BVH’s new track and field, receiving no response. Oversight Committee leader Nick Moreno explained his frustration with the Board’s money management, as he detailed his stance, there were several exclamations of agreement from the audience.

“We’re [the committee is] just sort of exasperated. It’s almost like I’m a part time employee with this district, and when I ask myself the question ‘are we better or worse off?’ the answer is ‘worse,’” Moreno said.

However, there were many supporters that praised the plan’s benefits for students. 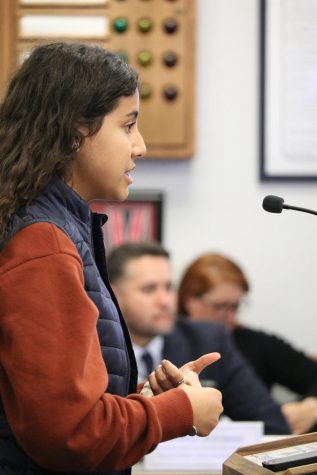 BVH PTSA Historían and sophomore Lourdes Castruita speaks to the SUHSD Board of Trustees about her experiences with the current track at BVH, and why it should be reconstructed. Castruita also mentioned how all students at BVH use the track during their required physical education courses.

“As a student at BVH, I run on the track everyday at school, and I know for a fact that the track is rundown and needs to be upgraded,” sophomore and historian for the Parent Teacher Student Association (PTSA) Lourdes Castruita said.

Castruita continued to explain that the plans would help improve the school “little by little,” especially by creating a higher quality environment for BVH athletes.

“They’re losing academic time by not being able to have practices later in the day, especially in our winter seasons. Some of the students will be missing two periods a day,” Math Department Head and International Baccalaureate math teacher Christina Ada said. “With the state looking at a later start time for all schools that’s going to impact sports by putting our athletes at a significant disadvantage.”

The new track and field that the proposal promises will replace the current facility which is comprised of a dirt track and older wooden bleachers.

“When I went to Bonita, I played football and ran track so I have fond memories of that field, but it hasn’t changed since 1995,” Biology teacher and BVH alumni Keith Dewalt said. “ I want [my kids] to have better facilities than the outdated 90s.”

Head Track and Field coach Ray Peterson notes that the outdated track has proven to be a safety hazard for students, both in sports and in Physical Education (PE) classes.

“Students come to my classroom asking ‘Can I get a nurse pass?’ I ask, ‘What happened?’ They say, ‘I sprained my ankle on the track,’ I ask ‘Why?’ They say, ‘It rained yesterday.’, Imprints are on the track and it dried up but no one’s gonna fix that,” Peterson said. “It rained for 20 minutes I am going to have to cancel track practice because it drizzled for 20 minutes.”

Those advocating for the newly approved plan believe that the renovation will expand the learning possibilities for students in many ways.

“What’s happening on those athletic fields is that these kids are learning life skills like discipline commitment and teamwork. These are traits that you need in life, these are life skills,” BVH Athletic Director Jason Murphy said. “What bigger classroom is there than an athletic field?”