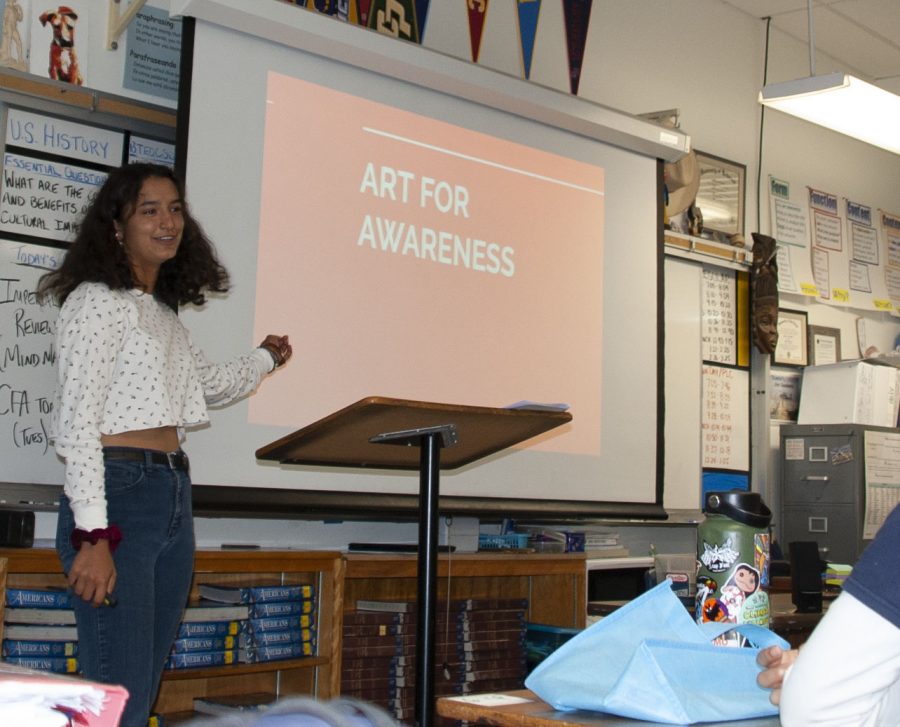 In their first year as a club at Bonita Vista High (BVH), the Art for Awareness club plans on doing exactly what their name entails. Spreading awareness of today’s pressing issues through various forms of artistic expression is the club’s mission.

Having started as an idea for a Girl Scout Gold Award project, the club was established by club president and senior, Kathleen Santacruz, with a vision to positively impact others and the community.

“As a club, our goal is to spread more awareness about issues such as gun control and ocean pollution through the use of art. For example, putting posters up about climate change or making chalk art around sewers that say ‘Don’t litter’ or ‘Don’t hurt the dolphins,” Santacruz said.

The club has many different ideas and plans for its future. Of course, the use of art as a medium for communicating their messages is described to be a crucial constant in their agenda.

“As of right now our goals are split up into the individual projects we take on. The biggest project we plan on taking on this year and our biggest goal is painting a mural at a local elementary school about ocean pollution and, through that, communicating the effects of ocean pollution and what people can do about it to kids through workshops at the elementary school,” Santacruz said.

Santacruz is not alone in her efforts. Club treasurer, event manager and senior Rio Herrera shares the same vision as Santacruz and also realizes the significant impact that art, like the mural, can have on a community.

“We want to have an impact on the people that live closest to the problem, but I think that’s the point of the mural – and not just that mural, but art in general,” Herrera said. “We’re all part of this community and the things that we’re spreading awareness about within it.”

Herrera furthers that the proximity of the elementary school to the beach is important in making their message more impactful.

“Because we live so close to the ocean, when we look at [the mural] we can see the consequences of our own actions,” Herrera said. “It inspires us.”

Educating kids with their mural and workshops is what the club is set on doing as of now. Santacruz is adamant about the club’s plan, and she feels that kids should be exposed to current issues at their young age.

“I found that things that tend to be in the back of my mind and things that I have always known were generated through my experiences from elementary school. As a kid you’re so easily influenced by stuff like that and you’re easily able to remember and learn new things,” Santacruz said. “I feel like if you develop a habit of learning to recycle as a kid, then you will be more able to carry that habit on to adulthood, because after all of those years of doing it, it becomes instinctive. So, this can really make a big difference if we target kids the most.”

The club is aware of the various logistical challenges that they will face in regards to painting the mural and coordinating their workshops for elementary school children. As of now, the club has yet to decide the elementary school(s) at which they will conduct their plans, but they have started the process of reaching out to a few schools.

Raising money is an obstacle that Santacruz is well aware of and already has a general idea as to how the club will raise the required funds.

“We’re planning on raising money through food fair to buy supplies like paint and paper for the workshops. There’s obviously a lot of money that is going to go into the mural but through fundraising and donations we’re going to be able to get it done,” Santacruz said.

The club’s projects will require many sets of hands to effectively complete, and as a result they plan to expand their numbers and enlist the help of other BVH students.

“There is going to be a lot of time that is put into the workshops and into what goes behind them. It’s going to bring people volunteer hours and we think that’s motivation for people to help out,” Santacruz said.

Club advisor, AP Art History and U.S. History teacher James Goodwin added that the club will be doing multiple things before and after the mural painting to engage others and take action in the larger local issue.

“Kathleen and the group will be handing out business cards, directing people to a website for more information if they’re interested in helping or promoting our cause,  and just spreading the word through a variety of mediums,” Goodwin said.

Goodwin aims to help as much as he can without compromising the students’ vision. He was more than happy to be the club’s advisor and aid them in their goals of having an impact on the community.

“The fact that BVH students are seeking to have an impact outside of the community and outside the school when it’s not a requirement -I think it speaks to the BVH community,” Goodwin said.