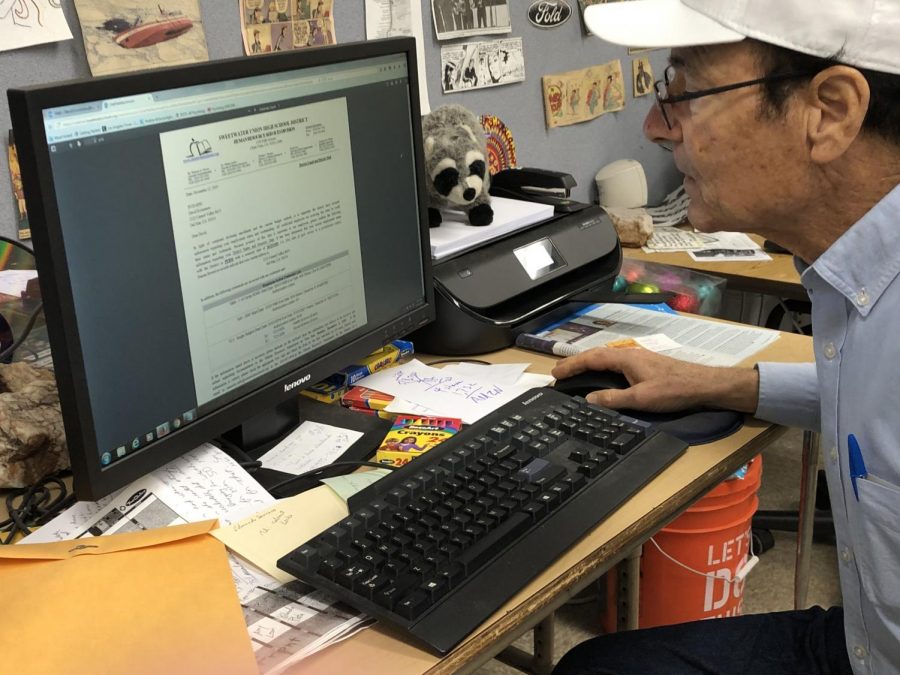 Sociology, Psychology, and AP Psychology teacher David Economou reviews SUHSD’s email. It presented teachers with various records including their seniority date. Teachers were asked to call Human Resources if there were any inaccuracies.

Sweetwater Union High School District (SUHSD) has been mired in financial troubles since the beginning of last year, when the district had overspent its budget by $30 million. A recent request from SUHSD has led to speculation on implications for teachers amidst the district’s budget problem.

On Nov. 12, Bonita Vista High (BVH) teachers were sent an email by SUHSD asking to verify various staff records, including their seniority date: the first paid date of service for employment.

The email stated: “Given budget uncertainty, it is critical the district plan and act in a way that provides flexibility over the coming months. It is important that the district have accurate information in the event we must take [action with our personnel].”

Many have speculated that this verification could indicate teacher lay-offs, as they do not occur annually. The only time a verification has happened was following the District’s consideration of a Reduction in Force (RIF)—the permanent elimination of positions.

“[This] request is concerning to teachers. In current negotiations, the District refuses to rule out RIF’s as a means to deal with the District’s budget problems,” Honors Chemistry teacher and Sweetwater Educator Association (SEA) Site Representative Jeffery Rivera said.

Many teachers, like Rivera, have expressed their disappointment in the district, citing last year’s furlough days (temporary unpaid leave from work). A failed 1% salary increase for teachers and a lack of a Cost of Living Adjustment (COLA) to wages (intended to offset inflation) have also been sources of complaint.

“Less money is going to the classrooms. My science budget for 5 classes this year was approximately $500. In 2010, I had approximately $900 for 5 classes. Most core classes are filled to capacity. Losing teachers as a means of fixing the budget would lead to even larger classes. This does not seem to be a ‘Putting Students First’ approach,” Rivera said.

Others remain hopeful in spite of the speculations. The district’s request for verification was prefaced by an email from BVH Principal Roman Del Rosario, Ed.D, assuring teachers not to be concerned.

Historically, seniority—the length of time an employee has worked—has determined who is dismissed. Those with more experience are typically prioritized.

“I have nearly 30 years of seniority here, so this means nothing to me,” Psychology and Sociology teacher David Economou said.

Earlier this month, SUHSD appealed to the California Department of Education over budget disagreements with the San Diego County Office of Education (SDCOE). At issue was a 3.8 million dollar placeholder in savings and another 3 million dollars in spending that SDCOE asked SUHSD to correct.

On Nov. 18, the state made a decisive call in disapproving the District’s appeal, agreeing with SDCOE in their letter that “savings [should] not be recognized in the budget until negotiations [with labor unions] are concluded.”

The District’s rationale: it reached agreement and implemented furlough days (the proposed 3.8 million dollars in savings) with four of the six labor unions. SDCOE’s response: these agreements require all labor unions to be in favor to implement the furlough days.

How this decision will impact teachers is not definitive, and whether the District chooses teacher lay-offs as a budget solution remains speculative.

“No one wants to be laid off, [but] it’s not a death sentence. You’re on a list of the first to come back when things brighten up—which they always do,” Economou said.