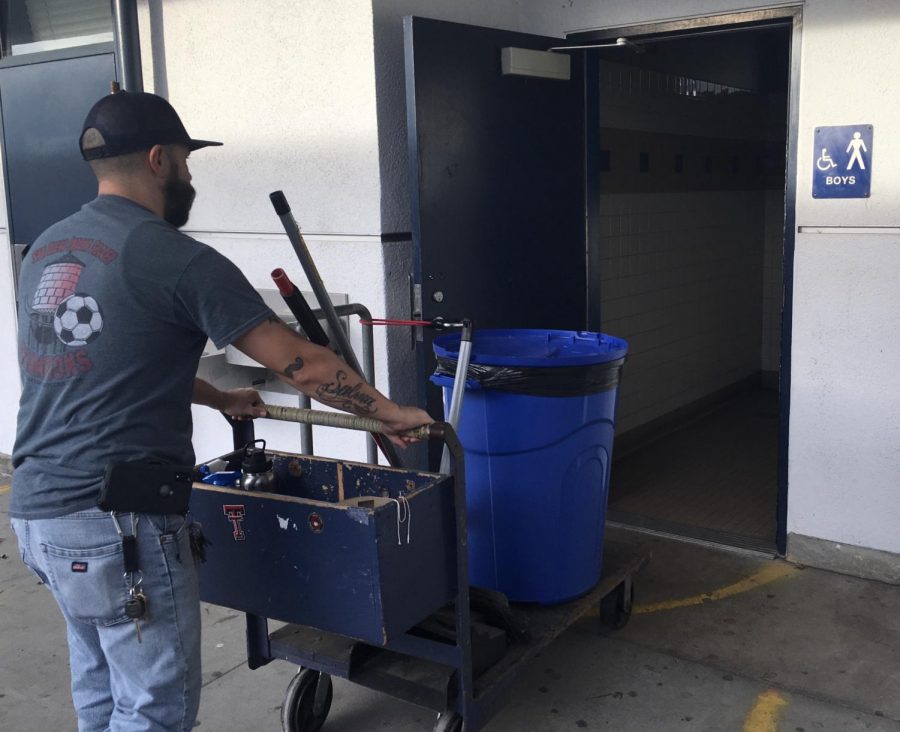 Custodian Sergio Mirmolejo enters the 500s building boys bathroom on Monday, Dec. 2. He cleans this bathroom almost everyday after school and often is faced with a heavier workload when having to fix appliances that have been vandalized or broken by students.

Sergio Mirmolejo and his fellow custodians worked longer hours to repair facilities after a rise in vandalism during the Fall 2019 semester. Bonita Vista High (BVH) administration responded to this increase in vandalism by closing two boys bathrooms and placing harsher restrictions on male students when leaving class to use the restroom.

The plan to put these restrictions on students was decided during a one-on-one meeting between Principal Roman Del Rosario, Ed.D. and Assistant Principal Esther Wise. Wise presented concerns such as graffiti, vaping and the increase in students being out of class without passes. Wise also received concerns from parents about their child’s safety being around other students who vandalize, vape or smoke when using the bathrooms during school hours.

“A lot of kids were out of class without passes and there was no way to monitor it, so that’s why we had to tighten things up,” Wise said. “We had to zone in on the group of students causing this and make sure the restrooms are safe,” Wise said.

Of the six male restrooms on campus, students will only have access two due to there not being enough Campus Supervisors to monitor them all. Additionally, there are more restrictions for students when leaving class to use the bathrooms and they will be asked for their ID or a hall pass by Campus Supervisors.

“I don’t think we’re in violation of any state law, and all the changes aren’t permanent, but rather they were moves to address those concerns,” Wise said. “It’s a process that has to happen and the objective is for students to be comfortable and safe in their classroom [and the rest of the campus].”

California Education Code 35292.5 states that, “Every public and private school maintaining any combination of classes from kindergarten to grade 12, inclusive, shall comply with all of the following: (1) Every restroom shall at all times be maintained and cleaned regularly, fully operational and stocked at all times with toilet paper, soap, and paper towels or functional hand dryers. (2) The school shall keep all restrooms open during school hours when pupils are not in classes, and shall keep a sufficient number of restrooms open during school hours when pupils are in classes.” In addition, “A school may temporarily close a restroom as necessary for pupil safety or as necessary to repair the facility.”

The new restrictions and closings, which are not a formal policy, are not to address repairs, but rather to prevent them in the first place.

“There’s no policy in place other than the safety of students. From that, we want to make sure that everybody else is able to use the restroom,” Wise said.

For junior Andruw Preciado Ramirez, having this new system of checking for passes or ID’s has made him late to class and less able to use the restrooms. He recalls a specific experience when this system was first implemented, during which he was injured with a torn calf.

“I had to walk with a [walking] boot to the bathroom. The 300 building bathroom, being the closest, was my best option so I could get back to class quicker. Mr. [add first bane] Brown saw me and said it was locked, then watched me as I walked to the 700 buildings in a walking boot and asked me for my ID, which I didn’t have at the time since I didn’t know it was a rule,” Preciado Ramirez said. “I had to go back to the class and grab my ID and then walk all the way to the 700s which isn’t the easiest thing to do.”

The restrictions were a response to student activity in the bathroom starting four months ago. Mirmolejo believes that vandalism has caused much concern from custodians because they have been forced to put in more of their time and energy into trying to remove writing from walls, or repairing doors and toilet paper dispensers.

Since having this new system, Del Rosario, Wise and Mirmolejo have noticed a change in the amount of vandalism taking place at the school and hope to continue with this pattern. However, Preciado Ramirez believes having this system will not serve as a solution for issues of vandalism or vaping at BVH. He expresses that the majority of students are not involved in these problems and should not be punished.