After a loss, boys’ basketball drops in Mesa League ranking 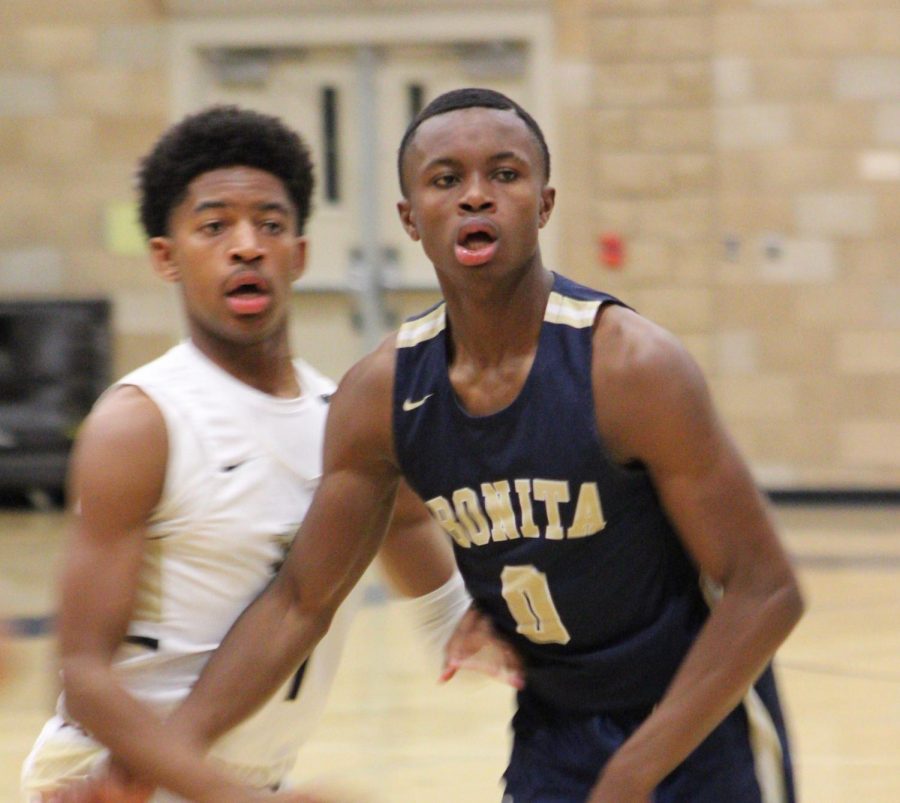 Point guard and junior, Damajae “DJ” Sanders (right) drives down the court to Mater Dei’s hoop. In the end, Bonita fell short with a score of 76-87.

Standings now show Olympian High School ranked second, due to them beating Eastlake High School on Jan. 29with a score of 68-46. MDCHS continues their winning streak of 6-0 in the league after their triumph against BVH.

“I’m disappointed that we lost, I thought we had a chance to win and we didn’t do some things as well as I’d like to, such as defense or rebounding. But, you know, we just learn from it,” Head Varsity Coach Don Dumas said after the loss.

Dumas mentioned how if they had won the game, they would have been tied for first place with MDCHS, but only if OLH had also lost against EHS at the other league game that same night.

“I feel like we played a great game, but we had a lot of trouble keeping [MDCHS] off the boards. We had great energy, amazing effort, but our biggest downfall for tonight’s game was [Mater Dei’s] rebound ability,” point guard and junior, Momo Stokes (4) said

Fellow point guard and junior, Damajae “DJ” Sanders (0) stood in his Kobe shoes prior to the game among his team and expressed how the loss of one of his major inspirations took a major toll on him. Before the match commenced, the announcer asked the crowd to stand and repeat a prayer as a tribute to Kobe Bryant, Gigi Bryant, and seven other victims who died in a helicopter crash on Jan. 26 in Calabasas, CA. While this impacted his emotions, Sanders was overall pleased with his performance.

“Before the game started, during warm-ups, I had to sit off to the corner of the bench to relax and cool off, because I was really thinking about Kobe–over and over again–which was really sad and hard for me,” Sanders said. “I wore Kobe’s in his honor and my prayers go out to Kobe, Gigi, and the other seven people involved in the helicopter crash.”

The Barons will now be taking on an away game against Otay Ranch High on Jan. 31, for which they will prepare for this Thursday by doing weights and overlooking film, according to Dumas.

“I really just hope we come out with the [win against ORHS]. We have to work hard every drill in practice and every possession in the game to accomplish the dub,” Stokes said.