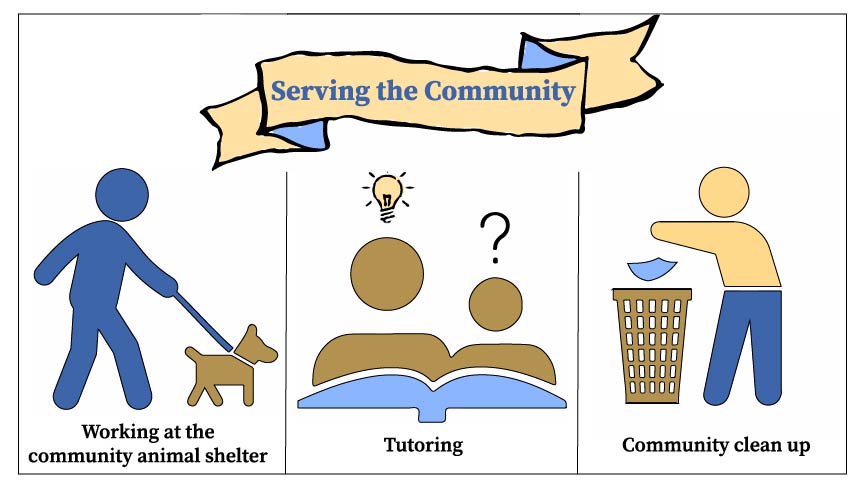 A variety of activities can be done by Sweetwater Union High School District students for community service hours. With the class of 2020 as the exception, every graduating class of seniors are required to have completed 30 hours of community service to graduate.

On April 1, the 30-hour community service requirement needed for graduation was temporarily canceled, announced through an email sent to students and teachers by SUHSD Director of Grants and Communications Manuel Rubio.

The implementation of prorated, or adjusted, hours for underclassmen has not been confirmed but remains likely if students do not immediately return for the 2020-2021 school year, according to Rubio. If implemented, they would lower the minimum 30-hour community service requirement for freshmen, sophomores and juniors based on years of high school attendance.

In the email, Rubio detailed concerns for student safety as the primary motive for the decision, citing the San Diego County Health and Human Services Agency’s (HHSA) extension of social distancing orders in San Diego due to the COVID-19 pandemic.

“We understand that this is really difficult. This is not normal. I think the good thing is [that] we’re all in the same situation and by everybody I mean, all levels of education. So it’s kind of understanding that at all levels, this is going to impact everybody,” Rubio said.

Rubio was unable to provide the number of SUHSD students who had not fulfilled their community service requirement, but believes the district will most likely implement prorated hours due to equity issues, as students would have significantly less time to fulfill their 30-hour requirement.

“If I had to take a guess, I would say [prorated hours is] how it’s gonna work because we really can’t hold any other classes against anyone else. It’s really going to depend on next year. If we come back as scheduled next [school] year, then obviously it would be just [the 30 hour requirement] as always, but we still have to wait and see,” Rubio said.

Senior Jake Basile had accumulated 40 hours by volunteering at the Fleet Science Center but was unable to redeem them due to the 80-hour minimum required by his service contract.

“I only had 40 [hours] before they closed the Fleet [Science Center] due to the pandemic. I planned to get all my hours done over spring break but obviously I couldn’t because they closed for months and they wouldn’t make an exception and sign off the 40 hours I already had. So basically, I had zero hours again and I had no idea how I’d get 30 during these times,” Basile said.

Basile stated that his worrying began “a long time ago” when worldwide events and congregations were being canceled as a result of COVID-19 and believes the decision to lift the community service requirement was “expected” considering the circumstances.

“I was mildly surprised that [SUHSD] actually did that for us. After canceling all school trips, functions, prom, grad night, my last three months of high school and likely our graduation ceremony, the least they [could do] is cancel the community service requirements too,” Basile said.

Senior Priscilla Sierra had fulfilled over half of the 30-hour community service requirement before the SUHSD’s decision to lift it. Afterwards, she stated she was feeling “slightly upset” as she had worked “very hard” for her hours, though she ultimately felt “relieved.”

“I think what the district is doing is probably the best way to address this issue, even if others or myself are not happy with it, because in order to get hours, most opportunities for this require to be around people, which isn’t the safest thing right now,” Sierra said.

Rubio stated in the email that further updates on credit completion, graduation and other pertinent items will be addressed in a future SUHSD communication. He urged all students, teachers and community members to continue monitoring their emails, SUHSD’s website and social media for future updates.