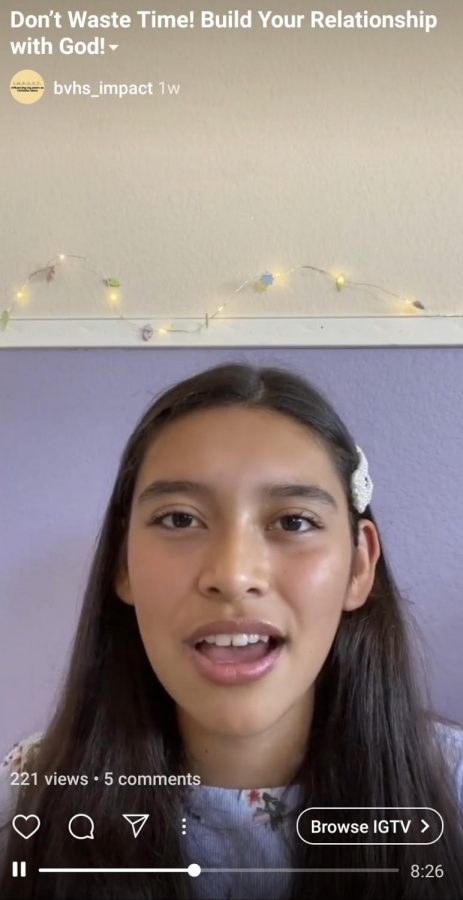 Sophomore and Club Secretary Mariana Marquez preaches a sermon for members of the IMPACT club on creating a relationship with God through IGTV on May 7.

Many club activities have come to a halt as a result of Bonita Vista High (BVH) being shut down due to the spread of COVID-19, but that has not stopped one club from continuing to hold meetings: the Influencing My Peers As Christan Teens (IMPACT) Club. The Christan-based club has continued to meet virtually, despite the current situation that prohibits them from meeting at school. They continue to support the people who need an outlet during the mandated quarantine placed in California.

“[It’s] more than a club; it’s more of a community. We want to have that connection in that community outside of school and we’re making that community by having [Instagram] livestreams and Zoom calls to provide the people who go to our club encouraging words or something else so that they know they’re still a part of this community during a hard time in which we can’t meet physically in a classroom,” IMPACT Club Secretary and sophomore Mariana Marquez said.

The IMPACT club continues to hold its meetings and sermons via Instagram live and Instagram TV (IGTV) through individual members’ accounts and occasionally on the IMPACT club Instagram account. Although the sermons are mostly made for members of the club and students of BVH, they are available for anyone to view and listen to.

“We direct our audience from our IMPACT club Instagram account to our personal accounts so people could get to know us more [as individuals] and not get to know us as just [club] leaders, but friends. Because that’s what we’re here for, just to connect and have that friendship with them. We’ve seen a lot of familiar people, but people you just wouldn’t expect reach out to us and watch these videos and the sermons we’re putting out,” President of IMPACT Club and senior Jocelyn Sanchez said.

Although the sermons are now going smoothly, it has not been without some ups and downs during the  transition to online. The club has continued their efforts to reach out to people, regardless of the issues that they faced earlier, however.

“We’ve had to adjust to the circumstances and just adapt to our surroundings and see ways that we could continue our club without being in actual school. The first couple of weeks [were] kind of hard because we were like, ‘What do we do? We don’t know how to do this,’ but we’ve adjusted, so it’s been going really smoothly ever since,” Vice President of the IMPACT Club and sophomore Giovanna Sanchez said.

With all schools in the Sweetwater Union High School District (SUHSD) being closed, other schools have had their clubs be put on hold as well. This time away has allowed the IMPACT Club to collaborate with other schools to bring people within the community together, including students from Montgomery High, High Tech High and Sierra High.

The sermons and Instagram livestreams given by the club have proven to be successful as they reach out to more people each day with their messages of faith and the passion to bring together the local community, as well as working with other schools and organizations in the current times of the COVID-19 pandemic to help those who need it.

“We’ve been able to reach a lot of people, so number-wise we’ve been successful [around 55 to 60 people at the highest], but to us success means just at least one person being encouraged and we’ve been able to connect with other people that have never really reached out to us. They reached out to us [now] and that’s successful to me – that people are actually receiving [our messages] and being encouraged and growing from this instead of being held back and being afraid. They’re encouraged and their faith is growing, so that’s successful to me,” J. Sanchez said.