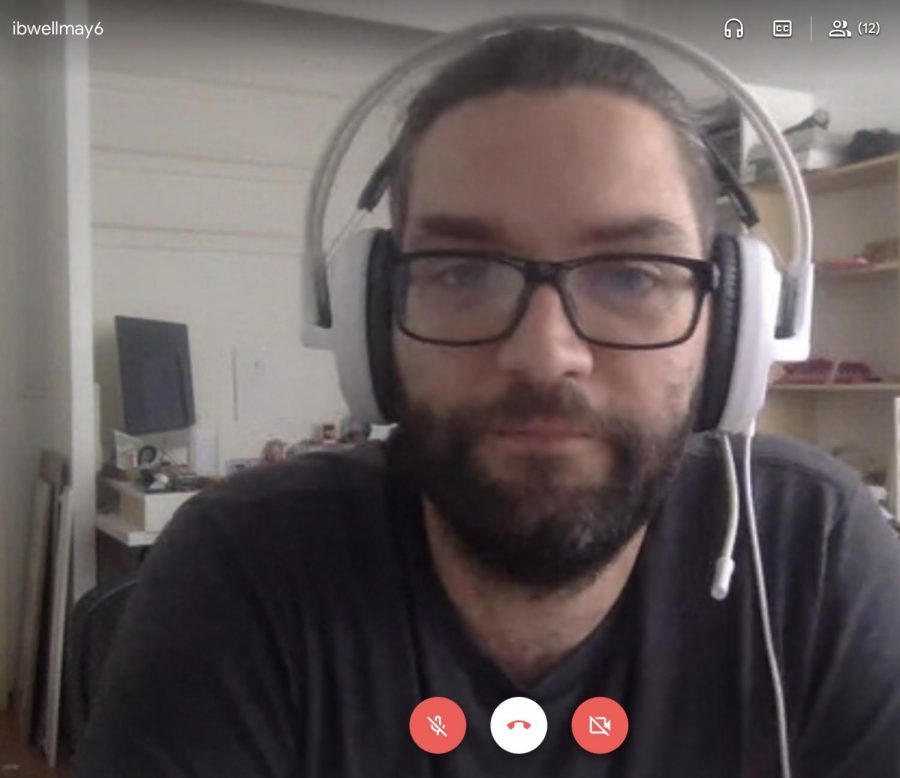 IB Coordinator Jared Phelps sent a message to all IB diploma candidates via Google Classroom, informing them that IB confirmed that BVH will not be holding seated IB exams. In the message, Phelps also discussed how the change will affect IB scores.

Pushing her glasses up, one student asks if she can send a “hello” to one of her teachers.

Speaking softly, another describes the struggles of staying motivated during distance learning.

A third voice chimes in about his disappointment with his last moments as a senior being lost to quarantine.

Attentively listening on the other line is International Baccalaureate (IB) Coordinator Jared Phelps, posing the first question at the start of the meeting. Beginning on April 9, Phelps has met with 10 to 20 IB students every Wednesday at 1 p.m. on Google Meets to discuss the struggles they have been facing during quarantine as part of the weekly “Wellness Wednesday” session.

Though Phelps has been implementing Wellness Wednesday discussions in his IB classes since July, the closure of schools due to the COVID-19 pandemic encouraged him to move these discussions online.

“For the entire school year every Wednesday, I’d have [a] five [to] 15 minute wellness themed message or activity that I did in all of my class periods when school was in session. Students really liked them and reported that they were helpful, so I wanted to find a way to continue that as we are all stuck in our homes,” Phelps said.

Initially, the student IB Officers helped coordinate the sessions until Phelps assumed responsibility for them completely, though teachers occasionally join them to offer their support. Every Wednesday morning, Phelps sends a Jupiter message to students in any IB course in hopes of inviting those who may be stressed or anxious and “want to feel connected to other students,” according to Phelps.

“I’ve been a teacher for 18 years, and the past five of those I’ve been the IB Coordinator. I’ve learned that much of the Coordinator’s job is to be a counselor to students and to staff.  In that time, I’ve grown a lot in my ability to listen carefully and not just jump to talking and giving advice,” Phelps said.

The video sessions typically start with a three to seven minute mental health exercise and transition into the discussion topic of the day, which can last up to an hour. Students are invited to discuss their personal struggles and air any of their grievances or emotions.

McClelland initially joined the Wellness Wednesday sessions because she struggled with adapting to distance learning and began to feel “alone and anxious” amid quarantine. After attending several sessions, she believes she found a “school community” to keep her grounded during these difficult times for her.

“There was one week where I was quite down and incredibly anxious. I was constantly overthinking and it was beginning to affect my sleep. Mr. Phelps spoke really openly and honestly with me about some things I can focus on, but ultimately, he listened openly. My peers were also there for me and I discovered that I was not at all alone. I think this particular day made me realize how strong our community was,” McClelland said.

She believes opening up about struggles has been a recurring challenge for herself and other participants, as many students experience difficulties being vulnerable about their academic and personal struggles.

“I have to constantly remind myself that Wellness Wednesdays are an incredibly safe space for everyone. The most rewarding aspect would have to be the strengthening of the community and the sense of companionship in adapting to these times. I will be forever grateful for how loyal and promising Wellness Wednesday participants are, and I feel there has been a great positive influence from Phelps,” McClelland said.

IB Junior Student Outreach Coordinator and junior Grace Rivera says she found solace in the sessions and gained “a lot of mindfulness.”

“Mental health has always been extremely important to me personally,” Rivera said. “My position in the IB Student Leadership Panel is to monitor the mental health of the junior class and help them if they need it. The most rewarding part of the sessions is the greater sense of community that we feel amongst each other.”

Rivera believes the sessions pertain to a larger discussion of student mental health, which she feels is seeing significant tolls amidst the stress and isolation of quarantine.

“Although we are apart and our stress is reduced, mental health still lingers. [It] is a topic that is not really discussed at school because it is either treated as a joke or students suppress it due to high amounts of work and other pressures. In quarantine, the circumstances are different, but problems still linger. It shows that mental health is real and must be addressed for all people, [including] teenagers,” Rivera said.

Ultimately, Phelps highlights the communal aspect of the video sessions—they serve as an avenue for recovery and solidarity for any student struggling with academic or mental health issues.

“I believe that holding these meetings is a valuable service I can provide to my students.  On top of that, in recent years students have shared that one of the best parts of being in IB is that they feel like they’re part of a family.  I think these Wellness Wednesday meetings are a bit like an online family gathering,” Phelps said.