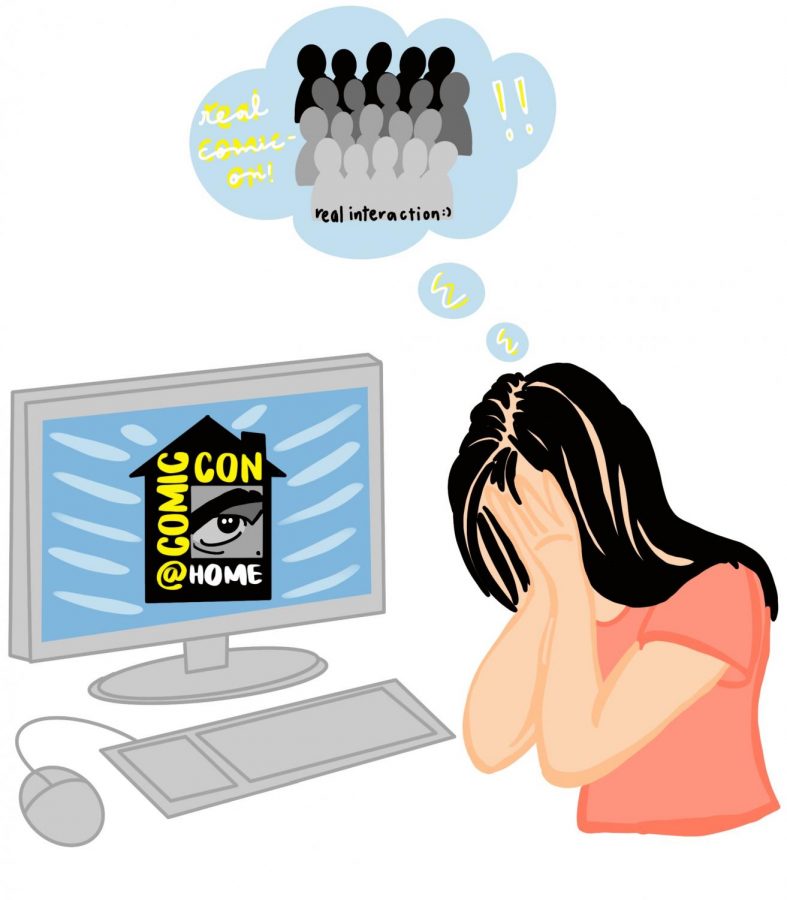 The renowned San Diego Comic Convention (Comic-Con International) is one of the world’s most awaited events, celebrating comics and related popular culture ranging from television media to video games and anime. The San Diego Convention Center sees its vendor halls flooded with the works of talented artists and craftsmen alike, and the sidewalks of Downtown San Diego are shared by different people from across the world—all donning the infamous convention lanyards.

This event, which has been celebrated annually for the last 50 years since its introduction in 1970, was not held in person in 2020 due to the effects of the COVID-19 global pandemic. However, the San Diego Comic-Con team decided to look at the glass half full and opted for a virtually-held convention instead, free of the usual $69 pay wall. From July 22-26, the first entirely virtual convention, dubbed “[email protected],” took place on the Comic-Con website and incorporated a variety of traditional convention events such as panels and new announcements from multi-media companies.

Nevertheless, even with the convention’s virtual presence, the aspect of what makes Comic-Con the anticipated heaven it is, is lost when put behind a computer screen. That aspect being the event’s ability to unite fans of all-things-popular culture together under one roof to enjoy it.

When opening the Comic-Con website, one was greeted with hundreds of flashy banners and advertisements for individual events scheduled to take place some time during [email protected]’s five day run. The website’s homepage seemed to promise lots of content and activities to come throughout the week.

However, upon further exploration, one would find hundreds of links that don’t seem to lead anywhere substantial— proclaimed “vendor halls” that advertise hundreds of companies with little to none of them actually selling anything at all. Such activity pages simply contain paragraphs upon paragraphs explaining the current situation and a mild suggestion that Comic-Con may carry out something “resembling” the advertised activity.

With “art shows” that consist of a mess of Tumblr posts, [email protected] seemed to be crossing its fingers on its promise that it made when one visits its homepage one will have an identical experience to that of a regular convention. With every clickable link only leading to a sliver of content its flashy poster suggested, it’s no wonder that the organized panel discussions were the real meat of the event. These also seemed to be the most popular features, judging by the video view counts ranging an upward of twenty-forty thousand views on some discussions.

With discussions taking place via Zoom video calls uploaded onto YouTube, the panels themselves managed to keep a bit of the usual charm they would have at any regular Comic-Con through the legitimate content and discussion they enabled. Panels covered discussions on art developers, writing developers and media developers whose intent was to introduce their newest projects and give advice to the next generation. Moreover, the lack of a $69 Comic-Con paywall made the wide array of panels available to the public though YouTube.  Therefore, crowds beyond those informed on [email protected] were drawn from other platforms and  made the panels the most engaging part of the event.

That being said, the disconnect between the panel guests and their audience left something to be desired, as the environment was much more distant and isolated rather than exciting and rowdy. This leads into the main problem with [email protected]— its inability to deliver what was promised to fans who look forward to the usual convention and frequently attend, that promise itself being something impossible to deliver regardless.

San Diego Comic-Con, simply put, is a celebration of culture— a celebration meant to be enjoyed and carried out with others who share the same interests. Conventions by nature are attended by people who share those similar interests and are united for the sheer purpose of enjoying those interests with each other. This is the main reason why many people attend these kinds of conventions despite facing usual challenges like crowd problems or price ranges.

In San Diego Comic-Con’s case, the same experiences you would expect at the regular convention were promised just the same through [email protected] However, what was delivered was a mess of page redirecting links, nearly empty pages meant to advertise products from the most popular corporations and eerily quiet panels with lots of discussion but very little real excitement. [email protected] saw the glass as half-full instead of acknowledging that it was really half-empty. In other words, they ignored the heart of the convention in hopes of recreating the appeal of a physical experience online, when it could not truly be done.

Today, although San Diego Comic-Con had to redefine the new experience of convention, one must remain hopeful that the future will bring back an age of enjoying television, video games and anime together. One must stay optimistic that the San Diego Convention Center can once again see its vendor halls flooded with the works of talented artists and craftsmen alike; and that the sidewalks of Downtown San Diego are shared by different people from across the world, all wearing the infamous convention lanyards.