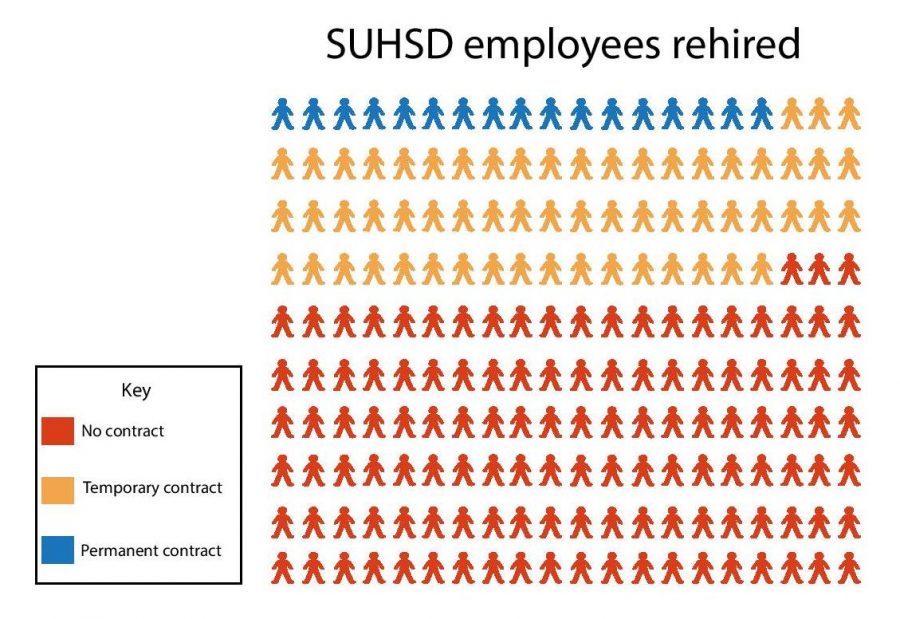 200 SUHSD employees were laid off in June. Upon the start of the 2020-2020 school year, 17 were rehired with permanent contracts, 60 were offered temporary contracts, and the remaining 123 employees have not received contracts.

Starting the week of July 27, the Sweetwater Union High School District (SUHSD) rehired 77 formerly laid off district employees in light of the potential for higher student enrollment during the 2020-2021 school year.

Among the laid off staff at Bonita Vista High (BVH), Michael Klein and Jose Leyva have been permanently rehired at BVH; Lalaine Torres has been assigned a permanent position at Chula Vista High; Michael Wegenka and Cody Betts have been unable to acquire temporary or permanent positions within the district. Richard Silvas was transferred to Otay Ranch High but was never laid off.

Within SUHSD, 17 teachers have been rehired permanently and 60 have been temporarily employed until at least October; whether they keep their positions will be determined in September after SUHSD assesses enrollment numbers and assigns permanent positions based on seniority.

The decision comes as 200 positions in the district were eliminated in June to address a $43 million budget deficit and an audit alleging fraud that led to the removal of former SUHSD Superintendent Karen Janney, Ed.D.

Upon the start of the 2020-2021 school year, district officials were uncertain of how many students would enroll, and they negotiated with the Sweetwater Education Association (SEA) to rehire certain employees, including new positions in the Physical Education and Physics departments.

Some rehired staff were also assigned positions at different schools where more teachers were needed in particular subject areas, though this serves to address student needs and is unrelated to the budget deficit.

“[After Interim Superintendent Moses Aguirre, Ed.D.,] took over, there seems to be more transparency, and we appreciate the openness of district leadership. We will always be vigilant because we, as an association, need to be advocates for our students and our community,” SEA President Julie Walker said.

Career Technical Education teacher and one of two rehired employees at BVH, Jose Levya was laid off in June and “took it lightheartedly” as he already had suspicions of being laid off.

“A teacher [at] Southwest High had mentioned to me that there is a span of time where every year he was like, ‘that’s it, I’m not coming back,’ and I think he got laid off a few times. So I knew [a lay-off] was a definite possibility,” Levya said.

Throughout the spring and summer, district administration repeatedly assured Levya that he had a “good chance” of being rehired, though nothing could be guaranteed. It was not until the first week of the school year that Levya was notified of his renewed contract.

“I felt confident about coming back [but] I never heard the official word until the start of school,” Levya said. “So I knew not to panic, but at the same time, I kind of panicked because of the timeline.”

Though Levya does not hold “strong feelings” toward the district, he believes district lay-offs are not “a good idea” and thinks budget cuts should prioritize student and staff needs.

“There’s definitely other places [where] we can cut money. [Lay-offs are] budget cuts that are leading to people being sent home,” Levya said.

According to BVH Principal Roman Del Rosario, Ed.D., SUHSD’s declining enrollment numbers for the 2020-2021 school year suggest some temporarily rehired teachers at BVH may not keep their positions, but he stresses the importance of minimizing student harm.

“We must not lose [sight of] the importance of having highly trained and talented teachers in front of students in the classroom.  While I do believe that some cuts are necessary, we must make every effort to keep these cuts as far away from the classroom as possible,” Del Rosario said.

Walker believes, however, that most teachers will likely retain their positions because of the uncertainties of the COVID-19 pandemic and a historically higher student enrollment after Labor Day, which falls on Sept. 7 this year.

Additionally, as SUHSD’s over 60% low-income student body transitions to remote learning, Aguirre hopes cooperation between teachers, students and staff amid the difficulties of the pandemic will ultimately prove fruitful.

“There’s a lot of things happening and they all seem to be happening at the same time. We’re going through a pandemic, [and] we’re going through a difficult budget situation. I would encourage [students] to continue to work with district staff, whether it’s at [a] school site or the district office. We appreciate [everyone’s] patience as we work through this,” Aguirre said.

An earlier version of this article falsely stated that Richard Silvas was laid off and rehired. Silvas was excessed to Otay Ranch High and was never laid off.