The pen and paper alternative to screen time 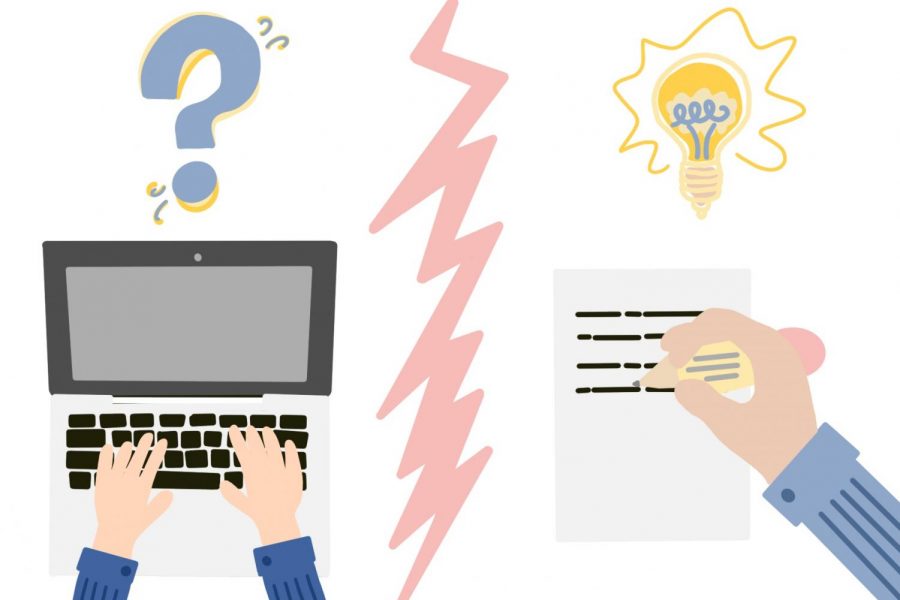 In early March, the traditional classroom environment was vastly different than it is today. Students sat in desks, traveled between classrooms and relied heavily on pen and paper. In contrast, the typical Bonita Vista High (BVH) classroom is now defined by sitting at a desk at home, occasionally walking around one’s house and completing most work online.

Such changes have enticed several teachers to substitute handwritten assignments with work done on Google Docs or Microsoft Word, which can easily be submitted to Google Classroom or JupiterEd. However, while word-processed documents have their advantages, making them the primary format for school work is actually detrimental to students in several ways.

On top of the long video calls students already attend for class, doing assignments on a laptop exacerbates students’ already excessive screen time. In turn, student eye health is put in jeopardy —  as explained by University of California Irvine (UCI) Health Professor Charlotte Gore, not only can too much screen time induce near-sightedness, but it can also lead to “[eye] dryness, [eye] irritation, excessive tears, a burning sensation and, often, headaches.” As extended screen time becomes a part of student routine, side effects like these are bound to occur frequently.

According to the website for University of California Los Angeles (UCLA) Health, the decline in eye health due to computer use is known as “computer-related eye fatigue,” and it occurs because of biological reasons. To specify, humans blink half as often when looking at a screen, which ultimately dries out the eyes and causes images to become blurry. With teachers requiring such prolonged screen time on students’ part, students are more likely to experience eye damage at a very young age. In the long-term, this can pave the way for lifelong eye problems.

Doing the majority of work online is harmful even beyond physical eye issues, especially for high schoolers. Stemming from those eye issues is also a potential lack of sleep. The website for UCI Health states that sleep specialists recommend avoiding looking at a screen at least an hour before sleeping. On days where students have large amounts of work, this may be unavoidable— causing their eyes and mind to be unprepared for healthy sleep by the time they get to bed.

Furthermore, online work is ineffective due to the benefits of writing on paper in comparison to typing. In fact, students who take notes are better able to conceptualize, synthesize and apply information compared to those typing, according to research cited by Professor Pam Mueller in the Scientific American. At its base level, writing by hand is a form of “mental lifting,” meaning it forces students to slow down, digest content and paraphrase.

In short, the nature of handwriting itself makes students analyze information in a more organized fashion. University of Melbourne professor Jared Horvath writes, “When you are typing, you are always going straight, whereas with handwriting, you are circling, you’re going up and down, you are drawing lines backwards— it’s very different.” Resorting to pen and paper is a more time consuming process that inherently activates deep mental processing.

Conversely, students who type tend to have lower retention rates because they are more likely to write down information verbatim, as later explained by the Scientific American. This translates to students learning less.

In addition, research found that college students who use laptops “spend 40 percent of class time using applications unrelated to coursework, are more likely to fall off task and are less satisfied with their education.”

In an at-home high school setting, these distractions are arguably even more likely to occur. Whether it be a text message, computer notification or a YouTube video, BVH students can find it a challenge to stay on task while using a computer for schoolwork.

To remedy the ineffectiveness of screen-based learning, teachers should make their students do more assignments on paper. Namely, they could require more assignments to be written on paper and submitted to Google Classroom or JupiterEd in PDF form. This can be done through the CamScanner app. As mentioned on the official CamScanner website, the app enables “any documents you see in real world [to] be digitized and saved right away with your mobile phone.”

In essence, students can take photos of assignments, which the app can easily crop, save them as PDFs to their Google Drive and submit the documents to any of their teacher’s online platforms. Last year, CamScanner was used by students in many BVH math classes, including International Baccalaureate (IB) Coordinator Jared Phelps’ IB Math Analysis and Approaches (A&A) Higher Level (HL) 1 class.

In the rare case that a student does not have a phone, teachers should allow that student to submit their assignments as word-processed documents instead. While the majority of BVH students have access to scanning devices, it would still be important to make exceptions for students who do not have access to them.

Regaining a source of normalcy should be a priority for educators and students alike. In this case, if normalcy looks like requiring more assignments to be completed on paper, then that is a course of action teachers should take. Yes, technology increases convenience, but it should not be allowed to interfere with students’ physical health, well-being and overall outcomes. Sometimes one stroke of a pen is all that is needed for a house to feel more like a traditional classroom.