The new meaning of political engagement 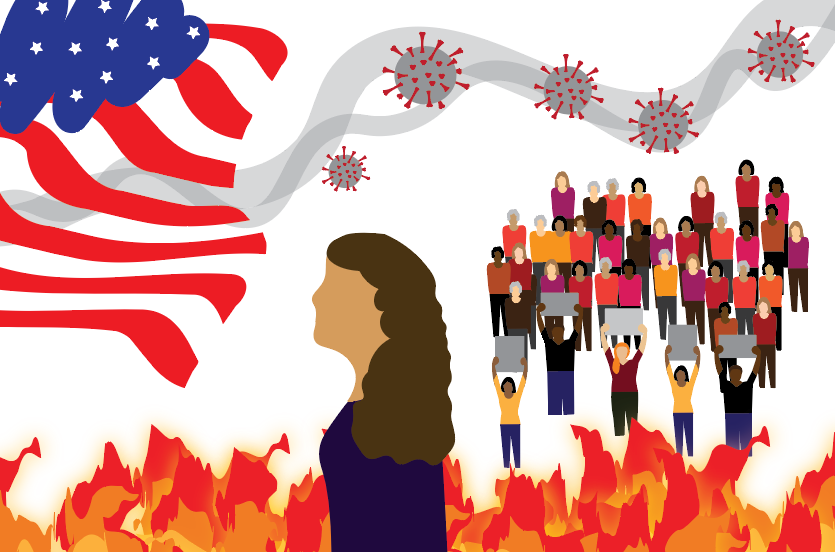 The first time I was taught to vote was in fourth grade. In a single file line with my best friends, I cast my ballot in the mock 2012 presidential election held in our brightly colored classroom.

Looking back, it feels so simple.

We did our research, put thought into our decisions and probably went to recess when we were done. It was the perfect amount of politics for me, being someone who would rather garden or read a novel than listen to a press briefing on international relations.

But that was before.

Before Donald Trump’s run for office transformed from something we gave little thought to into reality. Then from a reality into a real catastrophe. That catastrophe haunts our nation with 197,421 lost lives. If social distancing had been implemented just a single week earlier 36,000 lives could have been saved, reported Bill Chappell for National Public Radio.

Today, there is no right way for someone to be disengaged from politics. Even for people like me, 16-year olds who cannot vote and are not naturally political people, there is a responsibility to be aware and take action. Our duty to engage with politics right now, however uncomfortable, begins with staying informed. We have 51 days until the country’s future will lie in the hands of voters, and the level of uncertainty lying ahead in the next couple months is alarming to me.

Every time I hear another politician dub the upcoming election “the most important” of our lives, a part of me feels like grumbling and asking, but what do you want me to do? Instead, I remind myself that they are right. Whether we are adults or not, we are a part of this nation and we need to actively advocate for its welfare.

As my home state burns down around me, the news is flooded with reports of gun violence, I sign weekly petitions to discourage our administration from drilling in the Arctic and the planet faces a pandemic.

I just want to be able to believe in our leaders.

People in the U.S. should have done their due diligence as voters in 2016— and then been able to have turned their focus to their families, careers and lives instead of worrying about the mistakes elected officials would make. I wish we had a reality where only politicians had to be political, and citizens could make that choice for themselves.

Unfortunately, we no longer have the privilege to make that decision. When we learn that the president acknowledged the true threat of COVID-19 in February but continued saying that the virus would “disappear” as recently as July, we have no choice but to demand transparency. When Vice President Mike Pence refuses to acknowledge that “Black Lives Matter,” we have no choice but to advocate for justice.

For teenage students like me, times will never go back to those orderly and lighthearted in-class elections which I recall with fondness. I have been reminding myself that I cannot expect perfection from the presidents and politicians to come. Nevertheless, I should be able to expect leadership inspired by goodwill.

Until the time when administration can be looked to once again for direction and sympathy, the baton has been passed to us. All of us, whether we love or hate politics, have been called upon to care.