No more, no less

My experience with culture and identity 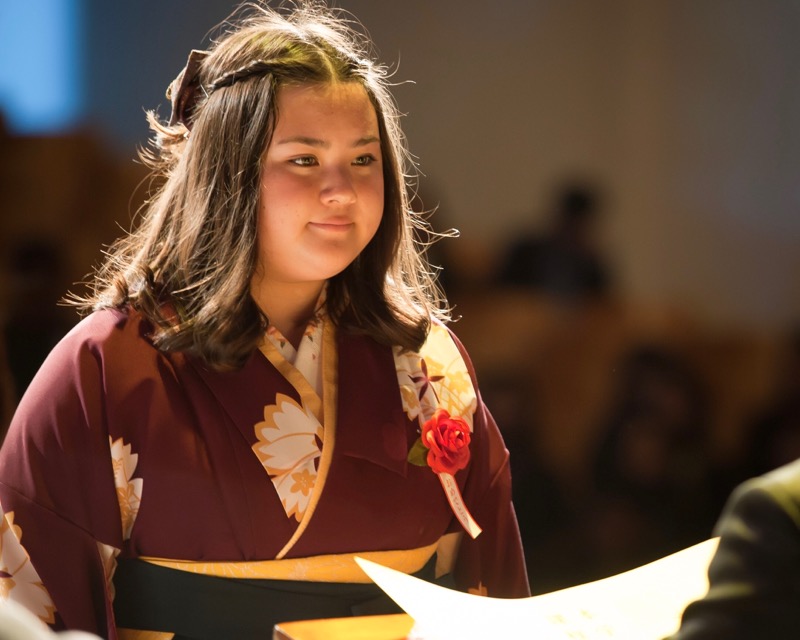 Senior Jennifer Dye receives her certificate of graduation from Minato Gakuen Japanese school in March 2019. She completed nine years at this school.

Sometimes I feel like a fraud when I talk about my Japanese culture. I’ve grown up with the language and traditions, but at times I don’t feel like I know enough to classify myself as Japanese. Yes, by blood I am half Japanese, but I am also half white.

I grew up learning Japanese from a young age, and for a while it was the primary language I communicated in since my dad was in the Navy and I was always home with my mom. For those few years, I was proficient in speaking, but as I entered preschool in the United States, that started to fade.

I went into preschool when I was around three years old — absorbing all that I could around me — and started to focus more on English. So, I began to lose my abilities in speaking Japanese fluently, but I’d still speak as much of it as possible at home with my mom.

It wasn’t until I was around seven years old when I entered Minato Gakuen, the Japanese school in San Diego my mom had been working at, that I started to regain these skills. I went into the school eager to learn more Japanese and continue to pursue my passion in my culture.

But that didn’t last long.

I started to realize how different I was compared to my American friends. They didn’t have an extra school to attend on Saturdays. And while they were out enjoying their weekends with sports and other extracurriculars, I was stuck in a classroom.

I would sit in class watching the clock—waiting for the day to end. I stopped trying to retain the information and pushed to leave as quickly as possible. I’d constantly beg my mom to take me out, but I never won those arguments.

It wasn’t only my American friends that pulled me away from Japanese school. I also always felt detached from my other classmates. Our classes were filled with both full and half Japanese students, but I never felt that I could understand the information as well as them. I’d always doze off in class, both because I didn’t want to be there and because I had trouble understanding. Both of these factors prevented me from learning.

I think this is why I lack the ability to read and write Japanese today. In Japanese, there are essentially three different alphabets: a basic one used in all communication, one for foreign words and a never ending one. Kanji, the never ending alphabet, always posed issues for me. It consists of thousands of Chinese characters that help synthesize words in sentences and have a multitude of different meanings depending on their context, but I never seemed able to memorize them.

As I started to get older and visit Japan more frequently, I realized that Kanji is an integral part of the Japanese language. From street signs to packaging on everyday items, I couldn’t escape it.

My nine years of Japanese school seem to me a missed opportunity. It didn’t register for me how important Japanese school was until it was almost over, and at that point — no matter the lengths of effort I put into it — I would never be at the same level as my peers. Although I learned a lot there, I am sure if I made a greater effort I would have been able to communicate better.

Outside of school, my Japanese culture is something that I have always taken pride in. I would use it as a sense of comfort in my identity when I didn’t exactly feel like I fit in as white. However, I didn’t always fit in with my Japanese side either.

A few years ago, I was sitting in my mom’s classroom doing homework after a long day at Japanese school. A group of young full Japanese boys ran past the classroom and called me 外人 (gaijin), which means foreigner in Japanese. I would often hear this statement made to my white father when we would be in Japan, and it always holds a slightly negative connotation.

It hurt to be called that. It made me feel like I wasn’t a part of my Japanese culture because to others I didn’t present myself that way. In that sense, I never felt like I fit into the image of a Japanese person or a white person. I was never white enough and never Asian enough and I felt like I couldn’t fit in either way.

I think this is why I get nervous when American people find out I am Japanese; often, they immediately ask me to speak. And while I can, to me it always seems awkward, and I get too afraid.

I know they won’t understand what I say, but regardless, I still get worried that they are going to somehow know I don’t understand a lot Japanese and therefore invalidate my cultural identity. It’s never happened, but my constant need to be perfect in different situations prevents me from accepting that it most likely never will.

My mom always tells me that it’s okay to mess up. And while I understand where she is coming from, this fear of failure never seems to go away. I always feel there is a certain standard I need to meet in order to be accepted into my own culture, which is honestly upsetting because regardless of how much I try, I don’t think I will ever be able to fully satisfy myself.

Nevertheless, I still want to make that effort. I may not have had the ability to when I was in Japanese school, but I still want to learn as much as possible about my culture and language — whether that be by communicating with my Japanese family and friends more often or by taking courses in the future for a more formal education in Japanese language. I know it will come with challenges, but I want to be as immersed in my culture as possible.

Ultimately, I think it is time to start allowing myself to accept that I am never going to be this picture-perfect self I have created in my head and take my mom’s advice. Because no matter the lengths I go to try to fulfill this image, I will be no more or less Japanese than I was before.