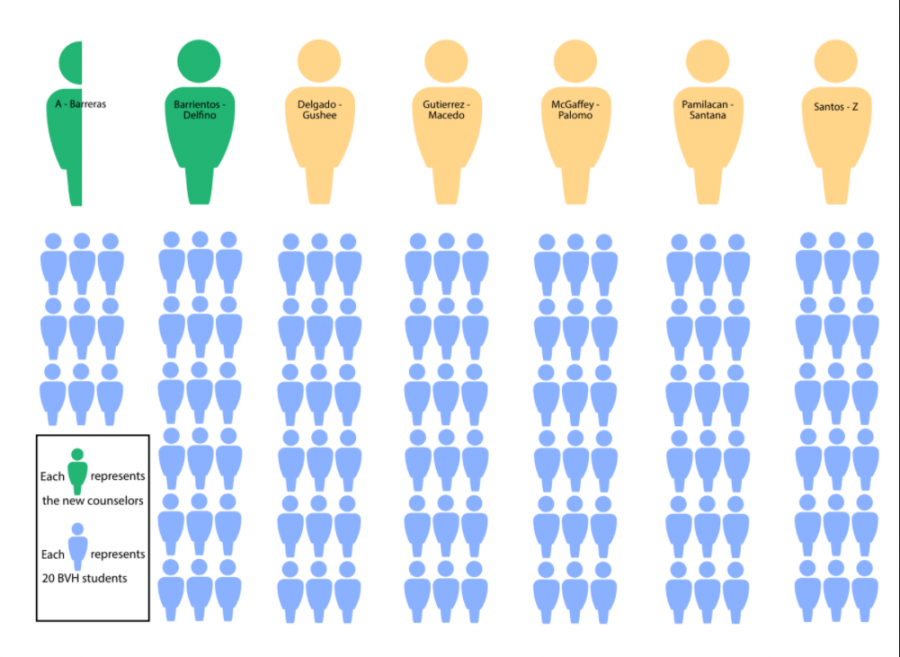 A depiction of the student breakdown for the current counseling team at Bonita Vista High.

The recent budget management problems of the Sweetwater Union High School District has district workers being relocated across both senior and junior high schools. With the recent transfer of previous Bonita Vista High counselor Lalaine Torres, two new counselors have been added to the BVH staff: Alfredo Cendejas and Gisela Lopez.

“The district is currently experiencing declining enrollment. At the same time, there was also the budget issue which led to the elimination of some programs […]. In our case, our least senior counselor was Torres. We still had the need for that counting position, but because of the anticipated layoffs, reduction in enrollment and elimination of learning center counselors, many of the counselors were put into a laid off status,” BVH Principal Roman Del Rosario, Ed.D. said.

At the moment, BVH is experiencing an increase in enrollment while Bonita Vista Middle (BVM) experiences a decrease in enrollment. This has led to a raise in the number of counselors from five to six and a half for BVH and a decrease of three to two and half for BVM. SUHSD has a ratio of 360 students to one counselor and Del Rosario compares it to other districts like San Diego Unified, Poway and Rosemont saying that it is “a pretty good ratio compared to other schools.”

Lopez originally worked in BVM, but with her ‘least senior’ position she has been transferred to BVH to take on the ‘half’ position needed. She will do the same in the middle school. In short, Lopez is working half time in each school, and, because she worked at BVH five years ago, she is acquainted with all the counselors. Lopez feels that working through distance learning is “more challenging for everyone.”

Cendejas had previously been working at Montgomery High as a learning center counselor, where he worked for 19 out of the 21 years he’s worked for SUHSD. With the recent district position cuts, Cendejas’ position at Montgomery High was eliminated, but because he had seniority he was able to choose from a list of schools that needed counselors.

“[The way I arrive to BVH] is not ideal. What I dislike the most is that when I came there was a position open. That position was open because somebody temporarily lost their job, so in that sense, I feel bad. […] The events that led up to me [choosing] Bonita [are that] it’s where both my daughters graduated from [and] I live in the area, so it’s where I wanted to be,” Cendejas said.

While Lopez knew the rest of the counselors from past work, Cendejas recognized them from district-wide counselor meetings that updated them on new programs, program changes and eliminations. Alongside their personal relationships with BVH counselors, Del Rosario had an informal meeting between the new staff where he introduced them and asked them to introduce themselves to the staff.

“[Distance learning] is an adjustment— it’s very different. From my job before, I was used to a certain thing, so very little could surprise me. Now, I’m at a school where everything is new again,” Cendejas said. “It’s a little exciting. It’s like a roller coaster you want to be on, but there’s some dips that make things a little scary when you don’t know what’s coming next.”

Both Lopez and Cendejas have voiced their troubles with distance learning, especially when it comes to connecting with their students.

“I haven’t really met any students in-person yet obviously, but I’ve talked to several on the phone that I’ve reached out to in regards to their schedules. It’s really all been over the phone, in texts or emails,” Cendejas said.

When it comes to a counselor’s role, Cendejas, Lopez and Del Rosario agree that there are three main factors to being a counselor. These factors consist of academic support with classes, providing emotional support to struggling students and helping students explore future career choices.

“I know our students are going to get to know their new counselors, and they’re really going to appreciate them. I would also add that our counselors have been working tirelessly once school started,” Del Rosario said.