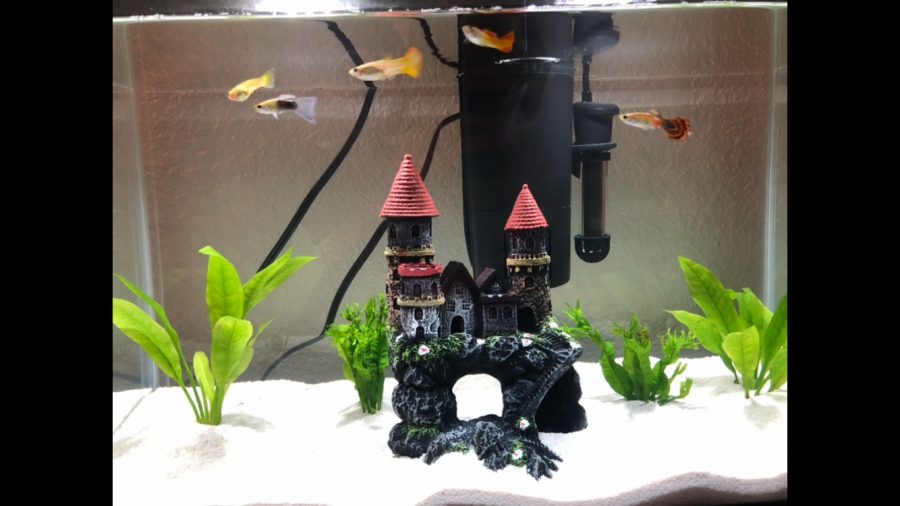 Senior Derek Czapek owns five aquariums that he stores in his home. He hopes the Aquarium Club can build aquariums at BVH once in-person learning resumes.

Founded at the beginning of the 2020-2021 school year, Bonita Vista High’s (BVH’s) new Aquarium Club seeks to bring marine life and environmental issues to the forefront. The club is a remake of BVH’s former Aquarium Club, which focused on plants and aquascaping but dissolved after the 2019-2020 school year.

The Aquarium Club President and senior Derek Czapek founded the club with Vice President and senior Sammy Elliott to create a space for students to discuss different types of aquariums, aquatic species and the environment. Club members meet every Thursday at 12:15 p.m. on Microsoft Teams and they typically listen to lectures, watch videos or learn about different fish species.

“Our first presentation was on the structures of aquariums, going in-depth on the glass or acrylic tank, the stand, filtration equipment, substrate, heating, lights and decor,” Czapek said. “They are vastly more complex than a bowl with water and a 25 cent goldfish. There’s research, equipment and knowledge necessary to maintain a thriving ecosystem within a relatively small glass box, which is what I seek to teach others.”

The club plans to maintain aquariums with marine life at BVH once in-person learning resumes. According to Czapek, the tanks may eventually be donated to science classrooms on campus, serving as a reminder of the club’s conservation efforts.

“A lot of times people are just like, ‘Oh, it’s a fish [with] an inkling of a brain cell,’ when it’s actually a living, breathing thing that matters in this world. So [creating an] aquarium and actually building a place for fish, I feel, has a grander environmental context,” Elliott said.

Czapek personally owns five fish tanks with tropical, coldwater and saltwater fish. He believes the Aquarium Club is a medium to share his love for fish and the environment while also encouraging others to construct their own tanks at home.

“[Students] have an interest in the intricacies of [aquariums]. They’re learning about something they like [and become aware] that aquariums are their own little biosphere,” Aquarium Club member and junior Lourdes Castruita said.

“A lot of times [people] overlook aquariums [and] fish in general, so we feel that educating [students] could get them a little bit more into aquariums and fish,” Elliott said.

For now, however, the club seeks to expand their membership and raise awareness for the environment. Club members regularly post club advertisements, light-hearted videos and informational presentations on their Instagram page in hopes of fulfilling their mission.

“People find out that fishkeeping is a lot more complex than they thought. Learning about the intricacies of an entire living, vibrant ecosystem in a box placed in one’s home is just fascinating,” Czapek said.