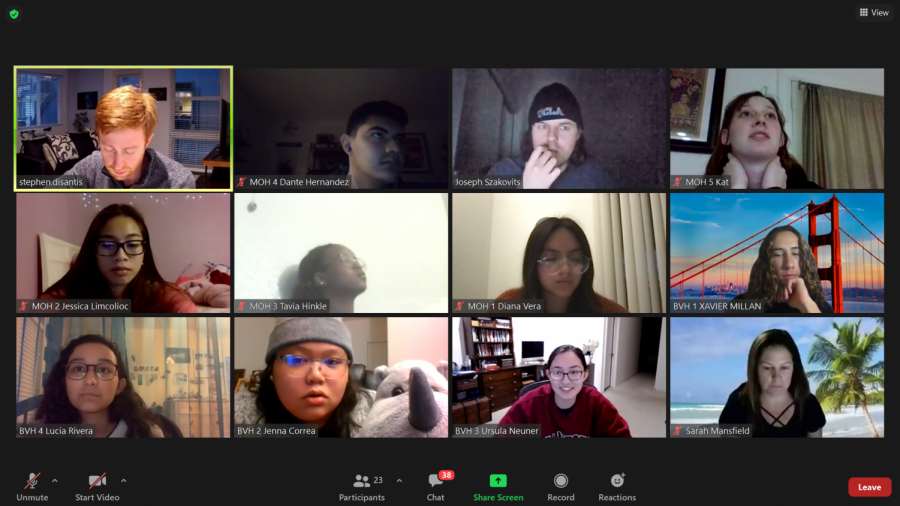 After qualifying for the playoffs last year, Bonita Vista High’s (BVH) varsity Quiz Bowl team abruptly had their season cut short due to California’s stay-at-home order to prevent further spread of COVID-19. Almost a year later, the team competed in their first official online match. On Feb. 8, the BVH Quiz Bowl team competed against Montgomery High (MOH) on a Zoom call, with BVH’s varsity team scoring a victory of 480-100 points.

For a large portion of quarantine, the future of Quiz Bowl competitions was unknown to members of the team. However, varsity Quiz Bowl has been conducting online practices since the “third” or “fourth” week of the current school year, as explained by varsity Quiz Bowl Coach Joseph Szakovits. On video calls, the team initially used an automated system called Protobowl, which produces random questions, but eventually switched to Zoom calls in order to emulate the new competition format. Szakovits has felt confident in the team from their first practice—where all of the members showed up.

“You never know what to expect when you’re transitioning something that has always been in-person into distance learning, and the students just jumped on board with [that transition]. There have been some technical [and] logistical challenges, but when you have buy-in from the team, all of those things have a way of smoothing themselves over,” Szakovits said.

The varsity Quiz Bowl team itself has not changed immensely since last year. Varsity Quiz Bowl Captain and senior Ursula Neuner explained how even though a few seniors graduated, the 2019-2020 team mostly consisted of juniors. As a result, four out of five of last year’s starters are still on the team.

“We’ve had a lot of continuity this year, and that’s generally a good thing. When a lot of juniors become seniors, that tends to lend itself towards having a strong team. We’re hopeful we can move forward with that,” Szakovits said.

Expectedly, several changes have been made to the format of Quiz Bowl competitions, such as the replacement of a physical buzzer with typing “buzz” in the chat and the time limit being dropped in favor of 24 general “toss-up” questions. This created a different competition atmosphere that made Quiz Bowl Secretary, Junior Varsity Captain and sophomore Giselle Geering “kind of nervous” before the match against MOH.

“I was sitting down [feeling] jittery […] because I had buzz typed in the chat, and I had my finger hovering above my enter key. I was [thinking], ‘I hope I don’t accidentally press it because that would be awkward,’ ” Geering said.

The match started with BVH briskly racking up points by correctly answering many toss-up questions, as well as bonus questions that followed them. Halfway into the competition, BVH scored 270 points while MOH had none.

“I was happy for the team and excited because [it’s] rare to get that big of a lead. It felt good. It made me think that our hard work paid off and feel […] confident about our team, our buzzing [and] our ability to communicate on the bonuses,” Neuner said.

To the surprise of Neuner and Szakovits, several BVH players got several guesses correct. For instance, when the game moderator asked what element represented atomic number 92 on the periodic table, Neuner correctly guessed “uranium,” even though she was unsure. In addition, Varsity Quiz Bowl member and junior Xavier Millan correctly guessed the name of a Russian astronaut, despite Szakovits stating that his tone sounded “like he was making the name up.”

“It was funny […] and honestly reflects our confidence. We were playing confidently, and sometimes if you’re nervous it’s harder to throw out a random guess because you might feel embarrassed to get it wrong,” Neuner said.

Reflecting on BVH’s victory, Szakovits explained how the Quiz Bowl league had recognized discrepancies in the preparedness of teams from different schools and, in turn, decided to not conduct play-offs at the end of the season. The league intended to reduce the competitive aspect and make the matches more about having fun.

“The important thing to understand here is that the playing field is not nearly as necessarily level for competition this year. We were practicing very early on in the season. There were some schools that had some trouble putting together their teams [and] organizing practices,” Szakovits said.

By the end of the match, all ten varsity competitors had the opportunity to play in the match, which Szakovits felt every one of them “deserved.” Looking forward to the rest of the season, Szakovits believes this success has bred an optimistic outlook for the future of BVH Quiz Bowl.

“I came away from that match feeling like we don’t have a weak link on this team. That presents a challenge for me because I have all of these players who clearly deserve to play. This was one of the more balanced efforts I’ve ever seen from our team […] That’s on credit for everybody,” Szakovits said.

Despite the noticeable differences this first virtual match had with Quiz Bowl’s first match in the BVH library last year, Geering noted that there have been positive aspects of the team’s transition to online competition. She misses competing in person but recognizes the new season isn’t without its silver lining.

“It makes you appreciate those [in-person] connections more because you realize, ‘Oh wow, I actually miss going to matches.’ You realize how important those interactions are. Like they say, ‘You don’t know a good thing until it’s gone,’ ” Geering said.

On Feb. 23, BVH will be competing against Chula Vista High (CVH). Contemplating the season as a whole, Szakovits believes that above all else, Quiz Bowl is giving students a sense of “community” amidst a time when everything is being cancelled—despite what the scoreboard may look like at the end of each match.

“That’s a lot more important than how many wins we get [or] how many questions somebody buzzes in on. What we’re delivering here is a positive experience for the kids, and I hope they really enjoy it and […] the sense of community it brings. If that is the legacy of this season, then I’m happy with it,” Szakovits said.