Time to warm up 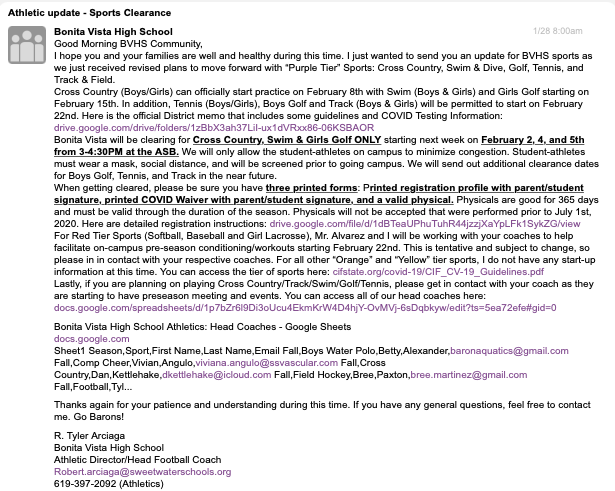 Athletic Director Tyler Arciaga details in an email sent on Jan. 28 that BVH can begin moving forward with "Purple Tier" Sports. Since then, the California Interscholastic Federation (CIF) has allowed for more sports to begin practicing and playing.

As Bonita Vista High (BVH) student-athletes have gone almost one year without sports, the district has been urged to allow sports to return by student-athletes and parents. After the Regional Stay at Home Order was lifted on Jan. 25 by California Governor Gavin Newsom, the Sweetwater Union High School District (SUHSD) set in motion plans to start up purple tier sports cleared by the California Department of Public Health (CDPH).

On Feb. 1, a Jupiter message was sent to students listing the following sports as well as their designated athletic clearance dates and practice dates: Cross Country, Swim and Dive, Girls Golf, Boys Golf, Tennis and Track and Field. The California Interscholastic Federation (CIF) later approved the practice of the following outdoor sports: Softball, Baseball, Girls Lacrosse, Boys Lacrosse, Girls Soccer, Boys Soccer, Field Hockey and Football. This prompted BVH to send an email listing additional workout, tryout and practice dates. The CIF followed up with the approval of indoor sports such as Gymnastics and Girls Volleyball. SUHSD and BVH administrators have yet to announce a formal decision on the practice of the listed indoor sports.

“Sports have been really isolated and disappointing during this time. They’re supposed to be an opportunity to form connections, so it’s just really sad how nearly impossible it’s been to continue sports in these past 10 months. That’s why I couldn’t believe that swim was actually coming back, that it was actually going to happen,” swim team member and senior Olivia Huey said.

Prior to the announcement, sports had been “nonexistent” for most BVH student-athletes, according to Athletic Director and Head Football Coach Tyler Arciaga. With the exception of Football, Girls Volleyball and Field Hockey being cleared for pre-season conditioning workouts on campus in November, we had yet to see the official return of any sports since their departure on March 13, 2020. Cross Country made history with its long-awaited return, being the first sport to start back up since the lockdown.

“I didn’t really expect them to have us practice because of the pandemic, but I’m really glad [Cross Country] came back,” Cross Country member and sophomore Rei Fulinara said. “I had been trying to run every couple of weeks during this pandemic, but since practice came back, I’ve been running every day.”

Although purple tier sports have been approved to make their return to campus, changes to the current plan students and coaches are still transitioning into may occur. The pandemic brings an “ever-changing environment” where adjustments “on a weekly basis are substantial,” according to Arciaga. However, countermeasures to the virus’s unpredictable nature are the extensive health precautions, measures that have changed the way sports look on campus.

“[Cross Country] is fairly socially distant by nature. There are the stretching lines, and everybody’s more spread out [and] wearing masks. [They] have a check-in for all the health screenings, so everybody’s getting temperature checks when they come in and asking some basic health screening questions,” Arciaga said. “From a coaching standpoint, coaches like to talk a lot after practice and now it’s just not the best time to do it anymore. We want to try to minimize the gatherings, so that’s cut.”

The standard protocol for students who come onto campus is being enforced at practices, such as the mandatory clearance that all students must go through including proof of a negative COVID-19 test and health screenings.

“[At practice] we are asked if we had any symptoms in the last twenty-four hours and we get our temperature checked. We wear our masks right up until we get into the pool and we put them back on right after we get out of the pool,” Huey said.

In addition, coaches are trained to enforce health protocol, being well versed in COVID procedures and informed on how to handle students who show potential symptoms. Sanitization is another big step BVH staff are taking to ensure the safety of their players, as well as ensuring all students are wearing masks when necessary. Although Arciaga does emphasize that not all student-athletes are expected to return if they do not feel comfortable.

“Obviously, there’s going to be some kids that opt-out, and parents that opt their children out, and that’s totally acceptable and understandable in this environment. But I will say that if I didn’t [think the protocols in place were safe enough for students], I wouldn’t be out there. We’re following the CDC and the [CDPH] guidelines. We have all the proper measures in place,” Arciaga said.

While some students have chosen to opt-out based on their own circumstances, Arciaga believes that for many student-athletes, sports can help uplift and motivate them to do better in school.

“There are kids that [if it weren’t] for sports, they may not get a 2.0 [Grade Point Average] or be motivated to do that. Or they would maybe go into alternative education [such as] the Learning Center or [other outlets] and do whatever they need to get through,” Arciaga said. “Sports really builds that whole sense of community, camaraderie and purpose.”

As of now, sports that have fully cleared student-athletes and have begun to practice have matches, meets or games lined up for the near future. For Cross Country, meets will be held with only one another team compared to previous years where meets incorporated teams from various schools throughout the county. As for swim meets, it is still unknown if they are going to be held in-person or virtually, however, their first meet is expected to be held on March 11 against Olympian High.

“Cross Country has three or four dual meets [coming up], so there are no invitationals at the time. And as of right now, the CIF’s and Metro finals aren’t permitted because they don’t want more than two teams competing against each other. If all the teams in the Metro Conference go and compete [it can cause safety issues]. So, they’ll be able to compete for a league championship via dual meets,” Arciaga said.

Arciaga, Huey and Fulinara all share excitement for the seasons ahead of them and for student-athletes being able to participate in their respective sports after nearly a year without them. Arciaga encourages students to participate in one of the many extracurricular activities available at BVH, whether it be sports or not, especially in a time where physical interaction is limited.

“The missing human interaction outside of the computer is important [to have available]. Being outside, running around and getting exercise is important, and [can] maybe give a little bit more purpose in what you’re doing,” Arciaga said. “Whether it’s any of the Visual and Performing Arts [programs], sports or clubs [you participate in], that’s what helps accentuate your [high school] experience. Anything we can do to help facilitate that, in accordance to health officials guidelines, is important.”