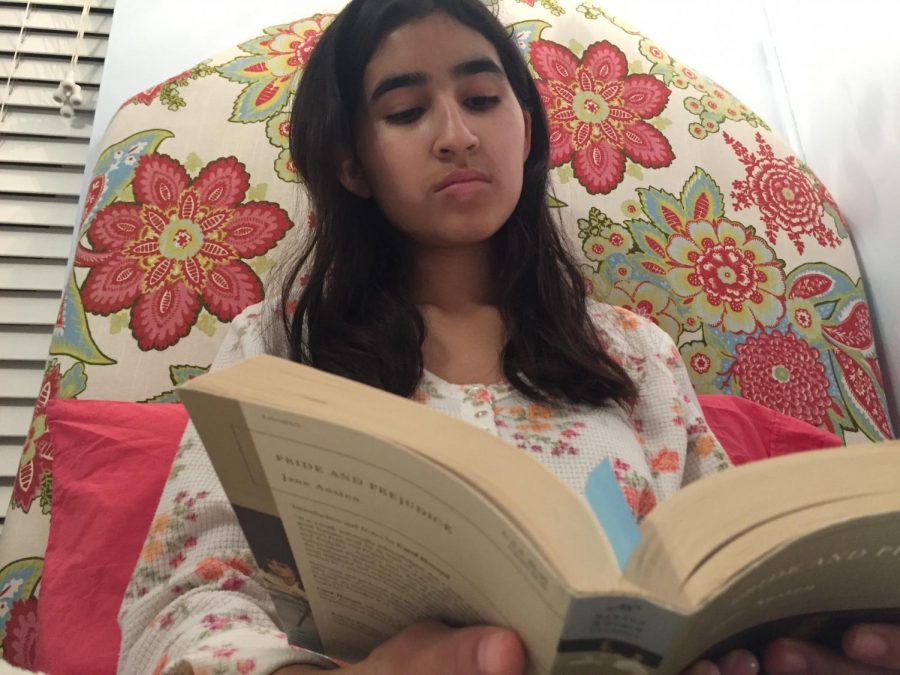 Pickwick Club co-President sophomore Giselle Geering reading Pride and Prejudice by Jane Austen before going to sleep. Geering is reading in preparation for the next Pickwick Club meeting. The club meets on Mondays at 12:20pm.

A student sits at a desk, cracks open a book, immerses themself in it and is transported into a completely different universe. The smell of the crisp pages penetrates their nose, stimulating their desire to read. Adventure awaits ahead, as their exploration furthers with each page turned.

In the Pickwick Club, cracking open a book is nothing new, as it is part of their routine to read classic literature. Reading books is accompanied by other activities such as club discussions, sharing thoughts and group analysis. Their club, which was created at the beginning of second semester, holds meetings every Monday during lunch on Google Meets.

“Right now, we’re [the Pickwick Club] reading ‘Pride and Prejudice’ as the first book, because I think it’s a great introductory book to classic literature. Every time we meet we discuss the chapters that we read,” co-President of the Pickwick Club and sophomore Giselle Geering said. “It’s not strict or super annoyingly structured—it’s just a bunch of people [and] friends talking about books.”

According to co-President of the Pickwick Club and junior Abby Roman, creating this extracurricular was vital to providing a crucial outlet for students who have felt alone during quarantine. Not being able to see each other in person can take a negative toll on students’ mental health, Roman expressed. She hopes that by forming this club, students can surround themselves with a community that they feel comfortable talking to.

“Communication [with] other people, even if it’s just through a screen, can go a really long way. When you’re engaged in conversation that is interesting to you, it’s fun to talk to different people about stuff you’re passionate about,” Roman said.

Geering’s wish is that by joining the club, students will be able to gain a new sense of gratitude for classic literature. Additionally, it would be a wonderful opportunity to expand on one’s interest in reading this genre, Geering explained.

“Although a lot of the people in our club are [already readers of classic literature], some of them haven’t [truly] explored classic literature. I hope this club [leads members to] appreciate the things those people [characters in the books the Pickwick Club reads] had to go through because I feel like we take for granted the privileges that we have in the 21st century,” Geering said.

Pickwick Club Advisor and English teacher Kalie Espinoza added that creating this social atmosphere in which students feel safe is important to mental health. Similar to Roman, she believes communication during distance learning is key.

“Self care is really important, and having that support system and social activity can be a [really good] mood booster. I also think that it’s going to be really weird when we [staff and students] all go back,” Espinoza said. “Having these kinds of clubs reminds us that there are other people out there in the world—that we can be social.”

For Espinoza, reading books in our current circumstances is imperative. She furthers by mentioning that classic literature–and books in general–hold valuable lessons, whether it be about ourselves or society; it’s a great hobby to pick up.

“Especially right now, I think books have the power to teach us about ourselves [and] humanity. We learn lessons from books that teach [us] empathy and understanding,” Espinoza said. “I also think it’s a good pass time. We spend so much time on our screens; being able to pick up a classic literature book and spend a few hours reading—that’s going to be good for you in terms of educating yourself.”

Since the creation of the Pickwick club, Geering, Espinoza and Roman have run into numerous obstacles. Various activities that are planned for the future have been quite difficult to set up, according to Roman.

“It’s been difficult to carry out community service projects. Because we’re not in school, we only get so much time to talk to each other throughout the day,” Roman said. “It’s difficult because we have to follow guidelines when we execute those projects, especially with book drives, and make sure no one is sick. Planning has been difficult for us, but we’re [persevering].”

Geering and Roman have had trouble getting in contact with the San Diego Council on Literacy (SDCOL), which is the organization the Pickwick Club plans to work with.

“People are stressed and busy, [which] means that it’s difficult to get responses from people,” Espinoza said. “Overcoming some of that communication stuff with other organizations that they want to work with was a challenge, but they overcame that quickly.”

In terms of the Pickwick Club’s goals, Geering strives to make community service projects a common occurrence. For her, promoting literacy within less fortunate communities is essential.

“I want to really make a difference and have a lot of books donated for clubs so we can distribute those to other people who need the books. I just want to make sure that we get books out to the community,” Geering said.

Comparably, Espinoza expressed her desire for the achievements she wants to see the club accomplish down the road. Participating in a club that actively engages in community service has fulfilled her purpose for advising the club; she loves how the Pickwick Club is promoting literacy in less fortunate groups.

“I think bringing books, whether it’s classical literature or not, to low income families [is a] really important [aspect] of the club and a cool part of the mission,” Espinoza said. “I was already interested in it being a book club, but when I saw that Abby and Giselle proposed this idea around literacy, I would really love to be a part of that bigger mission to bring books to people who can’t purchase them on their own.”

Roman added that without Espinoza as the advisor, it would have been impossible to create the Pickwick Club. Now that it has come to fruition, Espinoza is the one to thank for the endless support she has been providing the club, according to Roman.

“We’ve [received] a lot of support from Mrs. Espinoza. Having that support from a teacher goes such a long way. I’m so grateful that she was so willing to take on a whole different club during this time. All of the officers are very grateful to have Mrs. Espinoza on board with us. She’s lovely [and] she is a wonderful advisor. We’re definitely very lucky to have her,” Roman said.

Espinoza reassures that giving the club a chance doesn’t hurt, and it’s always good to explore activities outside one’s comfort zone. If someone does not end up participating in the club, then the experience they had is what mattered.

“We’re not here to slap anyone on the wrist if they don’t do the reading. If you’re joining our club, we want you to be there. But we also understand that students have other things going on, and distance learning is difficult,” Espinoza said. “We’re not there to be the authority; we’re there to enjoy it with you. If you’re curious about it, join us one time and see what you think.”