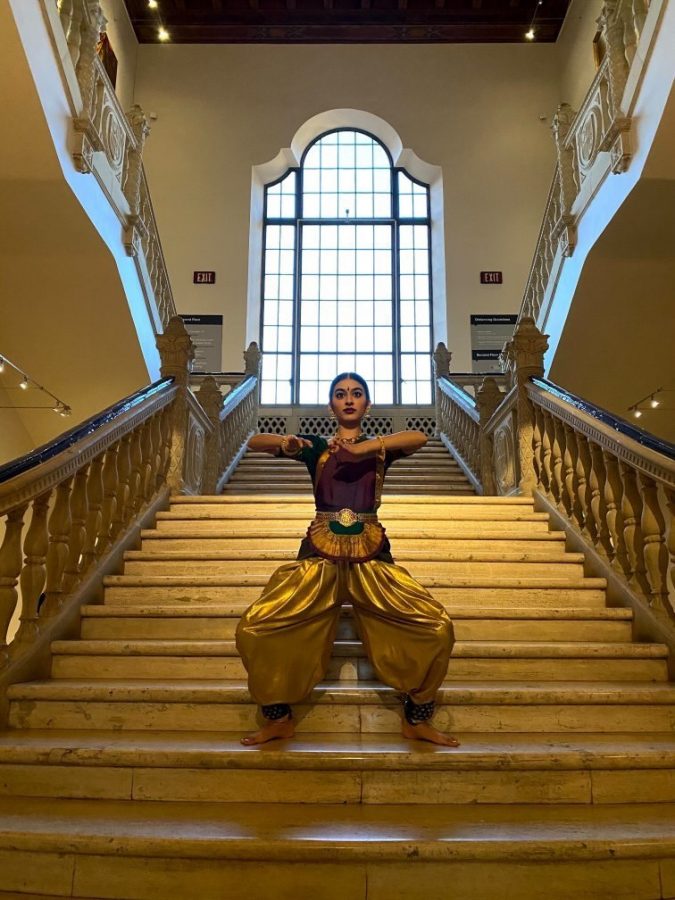 Senior Anoushka Savgur performs the traditional Indian dance known as Bharatanatyam at the Natesha School of Bharatanatyam. This performance is one of Savgur's first performances in eight months due to the COVID-19 pandemic.

Behind every dance step and graceful movement, there is a story involved. For 12 years, Bonita Vista High (BVH) senior Anoushka Savgur expressed her art through the traditional Indian dance, Bharatanatyam. A. Savgur is bringing her passion to new heights with her dance school, the Natesha School of Bharatanatyam, which is collaborating with the San Diego Museum of Art (SDMA).

“[Dancing is] something that I really enjoy doing. It’s one of my biggest passions,” A. Savgur said. “Even if my parents told me, ‘Oh, you don’t have to dance anymore’ I would still do it because I love it.”

Despite A. Savgur’s love for dance, she went eight months without dancing because of quarantine. However, when SDMA started a collaboration with the Natesha School of Bharatanatyam for their “Virtual SDMA+” video series, it gave A. Savgur a chance to perform again as she was invited to do a video performance for them. Instead of performing in front of an audience and alongside other dancers, A. Savgur did a solo performance that was recorded and streamed on the SDMA Youtube channel on April 13.

“I reconnected with my love for dance after not having danced for so long,” A. Savgur said. “The whole process of practicing, corrections and performing made me really happy, especially since I feel like I haven’t been that happy in the last eight months. So doing all this was a really fulfilling experience.” Savgur’s performance for the Virtual SDMA+ event is based off of the Indian 17th century painting titled the Defeat of Kaliya. This work of art was inspired by the Hindu god, Krishna, and his “playful” and “fun adventure” to defeat monstrous serpent Kaliya to save his town. Founder of the Natesha School of Bharatanatyam and A. Savgur’s dance instructor Suman Nayak believed A. Savgur was a great fit for this performance as Bharatanatyam tells stories and depicts different character interactions through dance. Because of her “really good theatrical acting skills and the ability to understand the story,” while, “going back and forth between being playful and being angry,” Nayak thought A. Savgur was an optimal choice.

“I try to match a student’s personality with the kind of story that’s being portrayed[…] When I saw this composition, it totally spoke ‘Anoushka’ to me. [I thought to myself], ‘Anoushka would be able to handle a story like this and I think she’ll have fun,’” Nayak said. “When Anoushka dances, I see a lot of joy and passion. She’s very detail oriented. She has to understand the story and the background, and internalize and work on it.”

The Indian classical dance form of Bharatanatyam originated from Tamil Nadu, a region in southern India. It consists of symmetric, linear and circular movements that “explore geometrical patterns and space” complimented by the rhythms of South India’s Carnatic music. A. Savgur’s mother, Rashmi Savgur, expressed that A. Savgur was introduced to this style of dance at the age of five and performed with the Natesha School of Bharatanatyam ever since.

“Anoushka is the first on both sides of her family to learn Bharatanatyam,” R. Savgur said. “Anoushka loved to dance even as a toddler. Seeing her interest in dancing, I decided to introduce her to classical Indian dancing. She took to it like a fish to water.”

Due to the COVID-19 pandemic, A. Savgur mostly practiced her dance one-on-one with Nayak through Zoom. Although it was a different experience, A. Savgur believed the practicing process “went along really smooth” considering it was a solo performance and most of her preparation was done on her own. Nayak felt that the process was easier due to A. Savgur’s years of experience.

“With Anoushka, I didn’t have issues because of the fact that she’s had 12 years of training. At this point, she literally has the foundational skills to understand if I’m teaching new choreography or venturing into a new piece. I feel she has the aptitude, ability and skills to understand it, whether it’s in person or virtual,” Nayak said.

According to A. Savgur, she practiced in-person with Nayak two weeks before the performance, getting her ready for the recording process. Since this was A. Savgur’s first virtual performance, Nayak and her videography team took many creative liberties. For this performance, they filmed at SDMA instead of a small stage, giving them the ability to shoot A. Savgur’s performance in a “360 degree movie shooting where the camera would follow you.”

“The whole idea of doing a dance in front of a camera was really interesting because there were parts where, while I was turning in a circle, they were filming in circles around me. So, it gave a really cool effect of turning, and [elements] like that [were] completely new and really fun,” A. Savgur said.

Overall, A. Savgur was glad to be part of the Virtual SDMA+ performance, as it not only gave her a chance to bring herself closer to Indian art and tradition, but also reunited her with her passion for dance during a difficult time.

“I think it’s important to connect to our culture in quarantine because it can be so isolating. I know [personally,] I certainly feel like nothing I’m doing has much meaning. So this is one way that people can find something that interests them or learn about something new, or connect with something that is part of their roots,” A. Savgur said.