Preparing for the dance floor 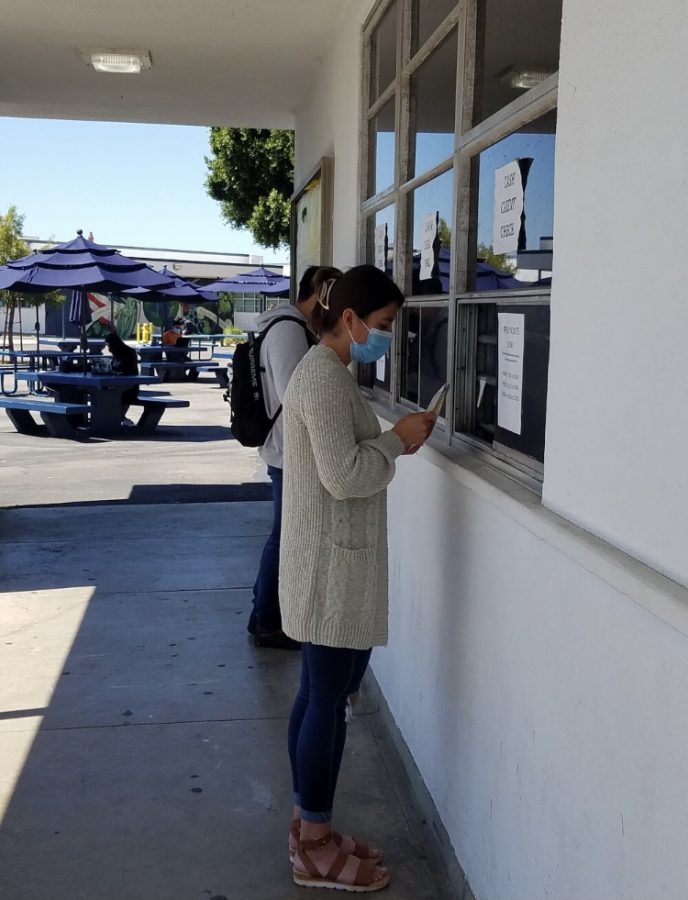 Senior Alexa Lazarit buys her Prom ticket from the ASB after school. Just as Lazarit must wear a mask while purchasing a ticket, she will also have to wear a mask at the event to follow the restrictions put in place given the current circumstances of the COVID-19 pandemic.

The Bonita Vista High (BVH) 2021 Task Force took action to plan a senior prom, scheduled to take place in BVH’s quad on May 1 starting at 7 p.m. and going until 11 p.m. The event will be “unique” due to the various COVID-19 guidelines that must be followed.

“I was shocked that we are going to have a prom. I didn’t expect to have one,” senior Isabella Labra said. “Before knowing any details, I was really excited. I was just like, ‘This is crazy. We’re having a prom!’”

“I think the time slots actually work pretty [well] because I know some people can stay up later, [whereas other] people don’t want to be out late at night [so] they can do other activities after prom. So I think [the time slots] give everybody an option to make prom their night,” Labra said.

In addition to the time slot restrictions, BVH seniors are required to be in small pods with no more than six people. The pods will not be allowed to mingle with other groups.

Originally seniors were not allowed to take guests, however the day before prom, they were told they can with certain restrictions. There are only 50 guest slots available for each of the three time slots. To bring a guest, seniors must take 25 dollars cash in an unsealed envelope along with a guest form and COVID waiver when they show up at the school for the event.

“The groups of six kind of sucks because I wanted to see more of my friends. But I also know that it has to be groups of six because then people would be too crowded,” senior Isabelle Bernal said. “You get what you get with the pandemic.”

While wearing a mask throughout the event and staying socially distanced, seniors will be able to enjoy 20 selfie walk stations, two DJs and food. However, the event will vary from typical dances as there cannot be one big dance floor and food must be individually packaged.

“Safety-wise it’s a good, thought out plan. When I went to the Task Force meeting, it was really descriptive. I think I’ll feel safe going, knowing that they’re really being cautious about everything,” Bernal said.

The 2021 Task Force is the one planning the event and will set it up when the time comes, just as they would in a typical school year. Every year, the senior class Task Force plans and fundraises for the prom, usually starting in the first semester of the school year to have it in the second semester.

During distance learning and the pandemic, the Task Force was not able to have their yearly fundraisers and instead had one big fundraiser through Snap Raise, which ended on April 25. The group got really close to their goal of 15,000 dollars as they raised 14,810 dollars in the span of a month.

“Everybody has been so supportive of giving these students an opportunity to celebrate the year that they’ve had. I don’t think in a regular year, had we done it, we would have been anywhere close to the [amount of money] we raised,” Task Force Advisor Christina Ada said.

To show donors who they were giving money to, the senior class put a video together on the fundraiser website. Ada also mentioned that the tickets were able to be kept at 20 dollars because of how well the fundraiser went. Along with the cost to get in, the costs of attire may have also decreased this year as the theme was geared towards a more semi-formal focus.

“Since it’s not going to be like a traditional prom. I personally don’t think I am going to go too much out of my way to buy a nice, fancy dress,” Labra said. “But I still think that people are going to dress up and look very nice. It’ll just be different.”

Labra, Bernal and many others are deciding to attend prom due to the fact that it is one of the only senior activities this year’s seniors could experience due to the pandemic. Other common responses included wanting to hangout with friends, wanting to make the best of their senior years and simply the fact that there’s only one prom.

“When you get into high school, you have that vision of going to prom senior year. The fact that we are able to have one, despite everything that’s not happened for us this year, [made] it like, ‘Let’s do this one thing that they’re giving us during this time,’ ” Labra said.

On the flip side, many seniors do not believe it will be worth it with all of the restrictions put in place. This includes everything from the time slots to the fact that they were told only a day before the event that guests are allowed, giving them limited time to plan accordingly. If not for the pandemic, the 2021 senior prom may have shown a different turn out, as seen when senior Miles D’Agostino said that he would “100 percent” go if there were normal circumstances.

Regardless of the turn out or restrictions, BVH’s 2021 Task Force and Associated Student Body (ASB) plan to make a senior prom “like no other”, keeping all students and staff safe throughout the way.

“I would just say that regardless of the fact that it is not a traditional prom, it is a way for them to celebrate their senior year in a year where everything has been abnormal. It is fitting that they have a unique and different prom and experience,” Ada said. “Those that come are going to be pleasantly surprised and excited about what we have put together in order to celebrate them, and that’s what it is, it’s a celebration for the seniors for their year.”