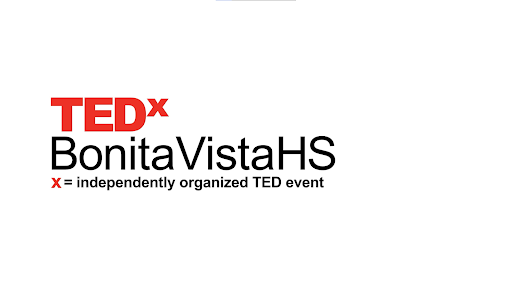 A screenshot during the 2020-2021 annual TEDx conference, which was held virtually through YouTube on April 24, 2021. Numerous speakers gave speeches detailing their experience with the theme of "Weathering the Storm".

On April 24, 2021, the Bonita Vista High (BVH) TEDx Club held their second annual speech event, which premiered on YouTube as a livestream. The event was open to the public and lasted approximately an hour and a half. Attendees of the streamed event listened to a multitude of speakers, with each of their themes tracing back to one idea: “Weathering the Storm.”

“We [student organizers of TEDx] wanted to choose a theme that didn’t exclude people [who] wanted to share their experiences, but also didn’t make it so that the pandemic was the only thing we talked about,” Head of the Technology Department and senior Gerardo Gonzalez said. “We wanted to have different perspectives; we wanted some more diversity. So we felt like weathering the storm allowed us to cover any and all hardships, whether pandemic related or not.”

In fact, the second annual TEDx event was meant to occur during the 2019-2020 school year. However, due to the COVID-19 pandemic and new social distancing guidelines, TEDx had to cancel the event. According to Gonzalez, this setback only further motivated members of TEDx to hold the event this year.

“I feel that for [2019-2020 seniors] it was a sense of frustration. If I had been a senior [last year], and my last conference I put everything into was just cancelled out of the blue, I would be really frustrated not having a second chance. I know for us [underclassmen] since [we got a] second chance, it was perfect,” Gonzalez said.

For TEDx Club advisor and IB English HL 1 teacher Jason Good, the organization of this event was not easy. According to Good, “it got so difficult to communicate” because students in TEDx have other work and extracurriculars to tend to. Additionally, publicizing this year’s TEDx event posed a challenge since it was all done digitally.

“All things considered, this was a pretty smooth process, it was time consuming, but students worked really well together. PR [public relations] was a difficult thing to do because it was hard to know if the message was getting out since everyone was off campus. The PR department put together a number of campaigns that were really well developed, [but] it was hard to know how much outreach we were actually successfully getting,” Good said.

The TEDx event on April 24 streamed successfully due to the perseverance and determination of club members, according to Good. Despite numerous challenges, the TEDx staff hosted the event regardless of the virtual circumstances.

“It took a lot of perseverance. The student organizers this year communicated really well. Through that communication, they were able to catch up when things fell behind,” said Good.

For speaker and junior Anna Maya, she was ecstatic to hear that she would be able to give a speech at the TEDx event because she “believes educating others about [her] people, about [her] ethnicity and about [her] position in society is of the utmost importance.” If not for this event, Maya believed, less people would be informed about the prejudice Jewish individuals face.

“This TEDx event gave me the opportunity and platform to share my experiences when encountering acts of antisemitism in order to spread awareness and portray how prevalent and dangerous this type of hatred is,” Maya said.

Maya gave a speech at the event detailing her experience with anti-semitism, or the prejudice against Jews. Prior to TEDx, Maya gave speeches to Jewish communities around San Diego and vocalized her concern to California governors regarding discrimination in the education system.

“Jewish values and morals have made me who I am. It is clear that the religion of Judaism plays a key role in my life. Although, anti-semitism also plays a large part in shaping my Jewish identity. Anti-Semitism is on the rise in California and throughout the nation,” Maya said. “A recent survey found that nearly half of Americans didn’t even know what the word anti-semitism means.”

In TEDx, the final step in the line of production was editing the video, including Maya’s recorded speech. Unfortunately, when certain departments in the TEDx crew missed a deadline, that lost time impacted the editing crew, which elongated the process of editing the video, Gonzalez said. Also, Gonzalez’s colleagues had technical difficulties so he took on a bulk of the work. Overall, the entire editing process took approximately five to six hours and another two hours to upload onto Youtube.

“[The technology department] really didn’t have time to fully work on the video the way we wanted to. Any kind of, ‘Hey, pass me this file’, ‘Hey can you do this for me?,’ ended up taking hours instead of minutes. [We were] trying to produce something that we knew our speakers would be proud of despite our limitations in time and technology,” Gonzalez said.

In terms of the future, Good hopes to continue advising this extracurricular and hold numerous other TEDx events. Given the pandemic, Good expressed that he would like to meet with the whole club more often, since collaboration as a group was rare.

“My goals are for students to get another experience at organizing a coordinated event, collaborating and [practicing] all of those skills,” said Good.

Maya added one last piece of advice to  individuals who may be hesitant to give a speech at the event saying, “Do it. Don’t even think about it.” She emphasized the importance of vocalizing one’s thoughts instead of bottling them up, so positive changes can be made.

“Although it might be nerve-racking, put it into perspective; Would you rather hang onto your thoughts and never let the world hear them, or be in a temporary, possibly uncomfortable,  [situation] for 15 minutes and have society [listen to] your words [to] shift their mindset and impact their lives permanently,” Maya said.