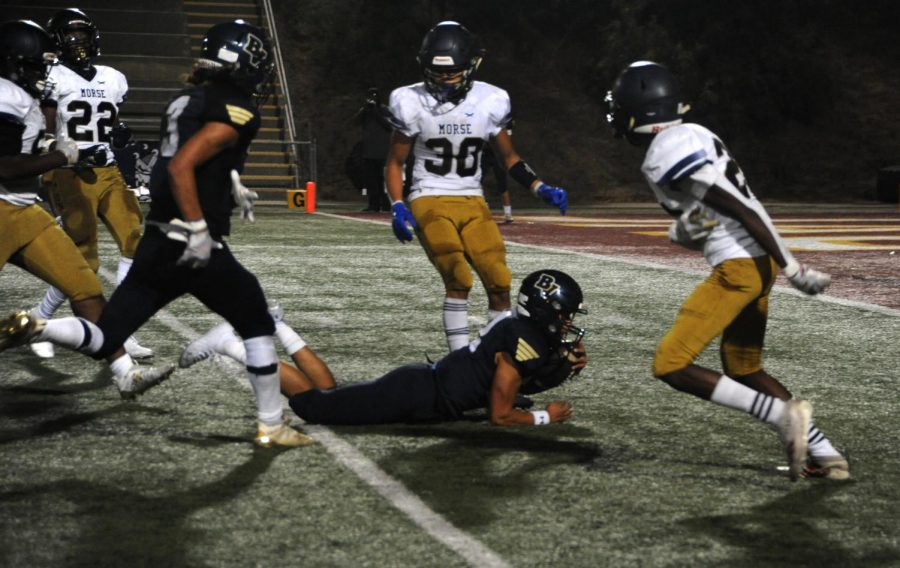 After almost two years of school activities being temporarily suspended, the varsity football season reunited the Bonita Vista High (BVH) community at their first home game of the season. Major clubs and groups on campus resumed selling concessions as staff, students, and parents filled the stadium while the band and Associated Student Body brought the spirit. The game took place at Southwestern College on Aug. 20, starting at 6:30 p.m. against Morse High (MH). With the stands full of energy, BVH Barons lost with a score of 13 to 38.

“I feel [the game] was a learning experience more than anything. Not only [have] I learned, [but] the whole team learned a lot,” cornerback and senior Tabari Taper (4) said. “I think [it] was a good eye-opener, so we can see what we can [improve].”

Returning to play was not simple as additional concerns arose for the football team. For Athletic Director and Head Football Coach Tyler Arciaga, he has to consider COVID-19 precautions when creating his roster. For instance, when players are not vaccinated, new problems surface as someone comes into contact with a positive COVID-19 case, which may possibly impact the team as a whole.

“The biggest thing that I [expect of] the team is that they do what they’re coached to do. They play hard [and] play fast,” Arciaga said. “If they do those things, I’m confident that we’ll have a successful season.”

Quarterback and senior Nathan Warren Roble Cristobal (12) started the game off strong for BVHs Barons, with two back-to-back touchdown passes in the first quarter. The first pass was received by Malosi Iuli (3) followed by a successful point after touchdown (PAT) and the second was caught by Dante Herrero (2), with a no-good PAT.

There was a shift in the game, however, during the second quarter when Roble Cristobal got hit as he threw the ball, leading to an interception. The Barons were unable to score any more points from that moment on, but the Tigers got on the board with a score of 8 to 13.

“[The interception] did not affect me because I’ve been playing quarterback for a [while] and mistakes happen. I think it did [affect the team] because that’s when the energy died, and everything just snowballed downhill from there,” Roble Cristobal said.

“It was mentally tiring. The fact that we couldn’t really stop [the other team when] they were running was really tough and frustrating,” Taper said.

In order to keep the Barons in a winning position in future games, Arciaga believes that the team needs to “do a better job of responding to adversity and [the] flow of the game.” To accomplish this, Taper believes the team needs to be more accepting of learning new concepts.

“A key thing is not to sit there and point fingers and say, ‘Hey, I confess it’s their fault,’ [but] point thumbs and say, ‘Hey, what can I do better for the team?’” Arciaga said.

With Arciaga’s advice in mind, Roble Cristobal reckons he could have been more patient with his throws and taken the lessons he’s learned at practice and trusted his instincts. According to Cristobal, he tried to counteract his mistake in one long pass, instead of taking it one step at a time. Taper believes he could have been more talkative on the field to help his team.

“I feel our goals as a team right now is to try to get to a point where we’re consistent with everything we do,” Taper said. “Going hard on every play is something that is just mandatory for us, [it’s something we] absolutely need to do.”

Another shared belief of Arciaga, Taper and Roble Cristobal is that the team needs to get back into harder conditioning while keeping nourishment and hydration in mind. This belief stems from the fact that many of BVH’s players were taken out of the game due to injuries such as cramps, sprains and loss of breath being the most common.

“For a lot of these guys, it’s their first time going two ways, [playing both offense and defense] on a regular basis. It was a wake-up call [in] how they need to take care of themselves. Not just the day of the game, but leading up to the game as well,” Arciaga said.

BVH’s varsity football team was scheduled to play on Friday, Aug. 27, against San Ysidro High (SYH). However, due to a COVID-19 outbreak within SYH’s team, the team’s next away game will be held on Sept. 3 against Sweetwater High, and their next home game will take place against Patrick Henry High on Sept. 17.

“Show some school spirit, show some love, don’t hate on your own team. We put a lot of blood, sweat and tears out on this field just for some of you guys to even boo at our own games,” Roble Cristobal said. “We haven’t had the brightest team these past couple of years, but this is a brand new year. This is a very different coaching staff [and promising] team, which is not to be slept on. Show some Baron pride because we show up for you guys.”