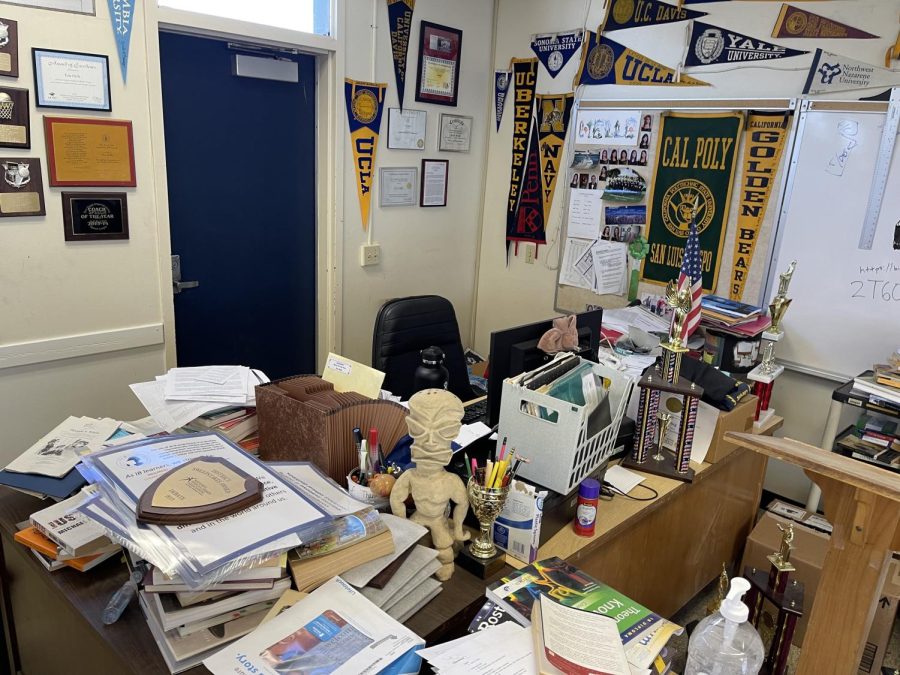 IB English teacher, Speech and Debate and Newspaper advisor Eric Helle’s chair is vacant after the scheduled substitute teacher is canceled. Students were left with no in-person supervision.

After the start of the 2022 semester, the lack of substitutes or staff has been a persistent challenge for Bonita Vista High school students. The lack of substitutes is currently a widespread problem that the Sweetwater Union High School District is facing, with some classes left without a substitute teacher at all.

“It takes longer to get substitutes into the schools and so many schools are lacking substitutes, there is a shortage everywhere,” Senior Office Assistant Claudia Roman said.

Each morning Roman goes down a list of unfilled assignments for where a teacher is still needed and ensures that all classes with these unfilled assignments are able to be supervised by an adult. Roman comments that to have substitutes for classes there is a long process that has to be approved. In numerous instances, there isn’t much available time for her to plan ahead and catch the classes that need help quickly.

“It [unfilled teacher assignments] is slowing down now but it seemed like it was almost every day for several weeks,” Roman said.

Many times, when there is no available substitute found for a class or a substitute position is canceled, students are sent to the cafeteria or left in a classroom waiting until someone is available to fill in the position. According to Integrated Math Two and International Baccalaureate (IB) Math teacher Cristina Hernandez, this results in agenda changes, class placement concerns and reduced productivity for teachers and students.

“I freak out a little bit thinking there isn’t going to be anyone there for my classes and to help my students,” Hernandez said.

On Jan. 21st, Hernandez had been gone with a substitute scheduled to cover her class. In the early morning, she received an email that the substitute had been canceled resulting in the class period passing without adult supervision. Throughout the day Hernandez was unaware of what was occurring with the class and their location. IB English teacher, Speech and Debate and Newspaper advisor Eric Helle has a similar concern

“We would have another period and I would wonder ‘what’s going on? Do they have a sub? Is anybody there?’” Helle said.

Similarly, Helle had to be out due to COVID-19 for a significant amount of time and needed substitutes. Many of his class periods were either being sent into classrooms or the cafeteria. Helle found that from his end it seemed “a little chaotic.”

“There [are] some times that the kids wonder who the sub is, where the sub is or if we have a sub,” Helle said

Senior Sophia Ramirez was a student in Helle’s teacher-less class period. At the beginning of the period, there had been no substitute awaiting the students’ arrival. Helle had supervised the class virtually requesting that all students have their cameras on to ensure productivity, but as the period progressed a substitute never came to fill Helle’s position.

“I think the supervision help[s] keep everyone on task. Even if the room is quiet, it doesn’t necessarily mean it’s productive,” Ramirez said. “With no teacher being there it’s less productive.”

Overall, a concern for the amount of productivity and staying on course with the curriculum was shared amongst Helle, Hernandez, Roman and Ramirez.

“I have [good] circumstances [being in] a senior [class] with no supervision, but it doesn’t work for everyone,” Ramirez said. “I can only imagine how much worse those moments can be in school with the really crucial curriculums.”