The valedictorian and salutatorian for the Class of 2022 are… 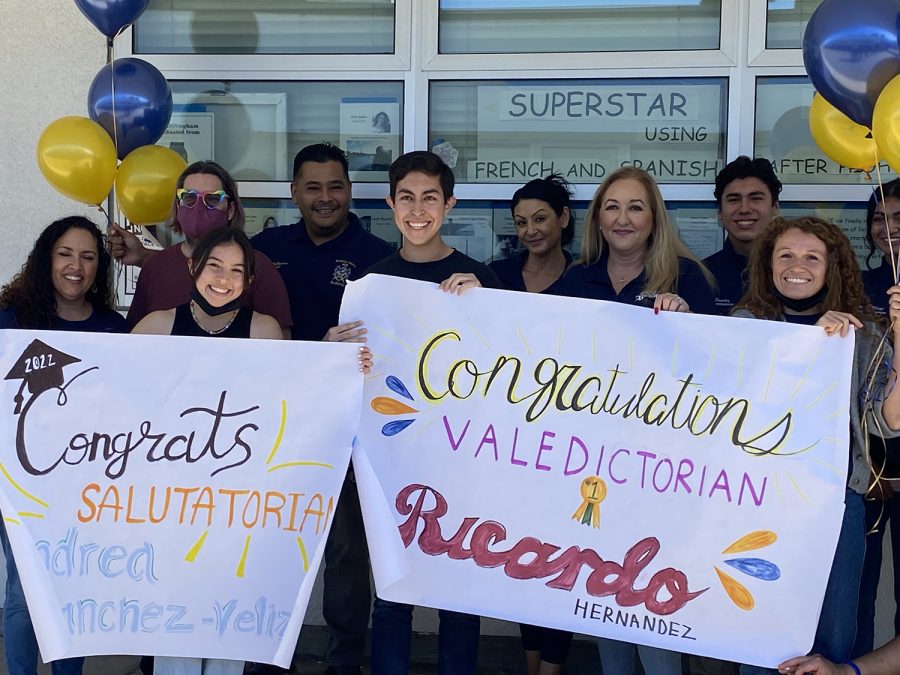 As principal of BVH, Del Rosario feels a major highlight of his job is getting to announce “special moments.” One of these moments for him is proclaiming the class of 2022’s valedictorian and salutatorian.

“I have three children of my own, and they’re all in elementary. I [can] just imagine the pride that their families, friends and parents must feel,” Del Rosario said.

To Del Rosario, Hernandez and Sanchez-Veliz have achieved a lot after putting hard work in their academics. He noted that their hard work is evidenced by the tough and demanding International Baccalaureate (IB) courses they chose, which most schools do not offer.

“BVH has an extraordinarily robust and rigorous curriculum. If you’re valedictorian or salutatorian at BVH, you’re the top of the top. There’s so many weighted courses that students are able to take,” Del Rosario said. “It’s not just [Advanced Placement] AP and Honors, but we have those IB courses. These students really manifest the best of the best, and they have incredibly bright futures ahead of them.”

“I can’t believe it because what happens a lot is the valedictorian and salutatorian are pretty quiet people,” Dillingham said. “You don’t realize that sometimes the quieter students are actually the [higher achieving] students.”

Additionally, Dillingham views Hernandez as a quieter student who typically does not participate unless he’s called on. On the other hand Sanchez-Veliz is a more vocal student, who is always ready to “jump into a conversation” or “raise her hand.”

“Both [Hernandez and Sanchez-Veliz] have excellent work ethic, they do all their work well. They turn things in on time [and] they participate in class,” Dillingham said.

Overall, Dillingham feels it is a ‘pleasure’ to have Hernandez and Sanchez-Veliz in her class. In contrast to Dillingham’s initial reaction, Hernandez was not surprised to hear that he is valedictorian.

“I already knew, but it was nice to hear the confirmation. I was definitely really excited [and] honored,” Hernandez said.

Throughout his high school career, Hernandez repeatedly checked his rank in the 2022 class. Hernandez noticed that on his transcript he was ranked one, so it did not come as a surprise to him. However, Hernandez did not expect Friday, Feb. 11, to be the day that Del Rosario and the faculty announced the valedictorian and salutatorian.

“I had no clue, I had no reason to believe they were going to do it. They just walked in,” Hernandez said.

On the contrary, Sanchez-Veliz did not think she was going to be salutatorian. She and her friend, senior Nayelli Rodriguez heard speculation the previous day about Del Rosario and the faculty announcing the valedictorian and salutatorian. However, she did not believe the announcements would happen. Once the principal walked into her class the next day, her “heart dropped” and she was really excited.

“I felt like it wasn’t going to be me. [Senior] Bibi Martinez [and I] were tied for salutatorian, and I felt like both of us deserved it a lot. When he [Del Rosario] said my name I couldn’t believe it,” Sanchez-Veliz said.

In addition, Hernandez mentions how becoming valedictorian was something that “just happened” because he was just “getting the best grades” he could get. In the end, he  accumulated a 4.74 Grade Point Average (GPA). This year, he is taking IB Spanish, IB Math, IB English, IB Biology and IB Econ. Last semester, Hernandez was a part of the Robotics club and E-sports club. Since Hernandez is valedictorian, he will also give a speech at his graduation ceremony in June.

“I’m a little nervous that I have to give a speech in front of the whole school, but it’s just really cool honestly to be able to do this. I feel pretty happy,” Hernandez said.

“I have been able to first hand see how Andera has put in so much work. She’s worked her butt off all year throughout high school. It was very nice to see her win it [salutatorian]. I’m glad that I got to sit next to her in class when she did,” Rodriguez said. “We both cried a little when they announced it. It was a super happy moment.”

Currently, both Hernandez and Sanchez-Veliz are not committed to a specific college. Hernandez plans to go to college locally in San Diego, but if he were to leave the city, he claims he would want to attend the University of California (UC) Berkeley. Sanchez-Veliz mentioned that for a while her dream school was UC Berkeley, but her goal now is to get into Stanford University.

“It was my own motivation to look at my grades and know that I tried as best as I could, and did as best as I could,” Sanchez-Veliz said. “I feel like this [becoming salutatorian] made all the late nights, and all the time I put into studying over the weekends worth it.”

Lastly, Sanchez-Veliz shows great sportsmanship to other students in the running. She signifies the importance of acknowledging the runner ups for salutatorian.

“It’s important to recognize all the students that were in the running, because there’s so many students that put in all their effort. It’s important to recognize that you need to try your best in school, even if you’re not getting straight As,” Sanchez Veliz said. “If you’re putting in all your effort and your teachers see you’re really trying to become a better student, it pays off in the end.”