31 classes in 17 years: BVH teacher expresses his varying passions with a busy schedule 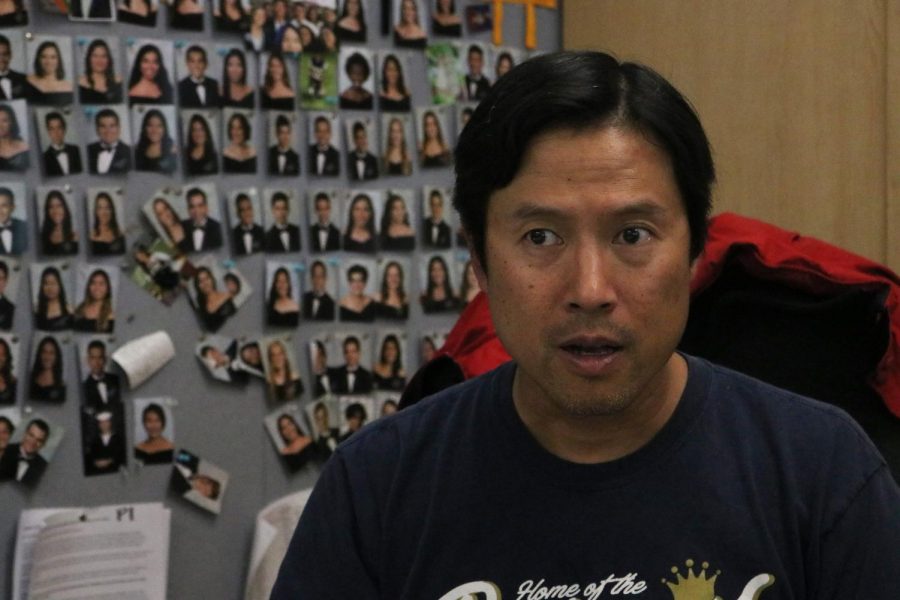 In a fellow teacher's classroom during lunch BVH teacher Edwin Lim speaks about his trend regarding courses he teaches. In the 17 years he has taught at BVH he has instructed 31 different courses from multiple subjects.

Everyday he faces a “unique beast” that many of his colleagues do not. With seven different curriculums to prep for daily, Bonita Vista High (BVH) teacher Edwin Lim continues his trend of teaching a variety of courses in only five periods per year. Currently, he teaches Advanced Placement (AP) Photography, regular Photography, AP Studio Art 2D, Computer Art and two different levels of Filipino.

“I’ve had six [or] seven years of multi-level planning, so to me it’s normal. If I had one class [for] five periods I wouldn’t know what to do. I would create more work for myself,” Lim said.

In the past Lim has taught Chinese, English, English Language Development and elementary grades. He believes this ongoing experience has altered the way he teaches overall.

“Teaching so many different classes has made me mentally agile. It’s gotten me very, very precise [and] it’s made me student-centered. I’ve learned to just go with what the kids need, instead of being teacher-directed,” Lim said. “It’s made me really humble, I’ve done a lot of soul searching, some hair pulling, but I’m used to it now.”

Lim also has made his classes more product-oriented, an example being the awards he has his students aim for. On Lim’s website, limphoto.weebly.com, he presents all the awards his students have won, including exhibits their work have been shown in. Additionally, his teaching schedule has made him become reflective and ask himself questions such as “how can I guide [my students] to get to their potential?”

“I think he’s [able to teach a variety of classes because he is] just so open minded [when] teaching students different things. I think he’s always trying to achieve more. He’s very involved in all the students’ assignments and he’s very encouraging. That’s the type of teaching style he has and he always seems to be motivating every student. [He believes] that they can achieve better than [what] they have already,” Rivera said.

While other teachers may have similar instruction methods, the only other BVH teachers who may teach the same variety of courses are Special Education teachers, according to Lim.  Additionally, as the only teacher at BVH who can teach some of his classes, Lim is essential to keeping all of these school’s courses open to students.

“It takes a special teacher who just has a joy for [their] subject [to teach a wide variety of classes]. I absolutely love Filipino, Photography [and] Computer Art, [but] I would not recommend [it] to everybody. You need a soul [that] is a little bit crazy, who loves the subjects, and who just likes a challenge. Then this would be good for that person,” Lim said.

Part of the reason Lim has been able to teach a wide variety of courses during his tenure is because many of his courses are mixed into the same period. An example of this is his AP Photography and regular Photography courses both being taught together. This changes the class dynamic for many of his periods, something Rivera described, along with junior and Filipino student Hailey Jacildo described.

“He has [the Filipino class] separated for new people and people who have already taken the class, [who] know more. [He] teaches them different things and then the [returning] people try to help the new people out. We have conversation circles, and he makes sure that if there’s a new person, they’re partnered with somebody who already speaks [Filipino],” Jacildo said.

Lim believes that by mixing his AP and regular photography classes he exposes his regular students to higher level content, although adjustments, which lower the difficulty, are also made to the AP class’s curriculum, according to Rivera. Despite the challenging schedule Lim has, he feels he was well prepared for it by his educational and professional past.

“I was a visual arts major at the University of California, San Diego (UCSD) so I feel like I was well trained there. We were taught photography, video, film, and so that’s how I approached [teaching different classes, by] just [being] project-directed [and] teaching [my students] everything,” Lim said. “That’s another thing: I’m a better photography teacher because I teach computer art, I’m a better computer art teacher because I teach photography.”

Although in the past Lim was able to teach certain language courses while gaining his respective credentials, he has also been restricted in course selection by changing student demand. After two years, for example, BVH no longer had a large enough student demand for him to teach Chinese. Lim and Jacildo were pleased that this did not occur with Filipino this year.

“I just love all the different [courses] because I love photography [and] I love computer art. I don’t want to choose one or the other. It’s like picking one child over the other,” Lim said.

As both Jacildo and Rivera stated, Lim credits his passion for several topics as the drive for him to teach courses from language and visual art departments. After requesting it over a decade ago, Lim continues to enjoy the seven courses he is teaching this year and does not plan to stop.

“Oddly enough I asked for this [unique schedule], which in the beginning was crazy, but it’s pure joy for me. The reason that I agreed to this is because I don’t know any other way of teaching,” Lim said. “I love all my classes and my craziest cases [experiences] because my kids have won so many awards. I’m super happy.”