Q&A: A response to SUHSD decision to eliminate Learning Centers 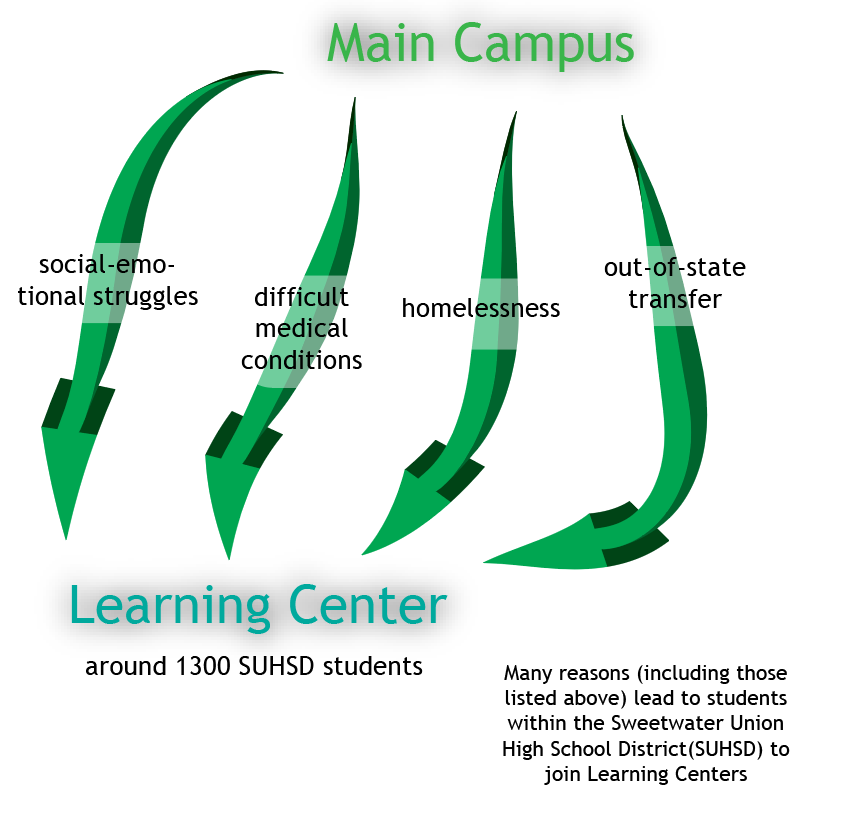 Thomas Maier is a Special Education and General Education teacher at Bonita Vista High (BVH) who has worked for the Sweetwater Union High School District (SUHSD) for about 15 years. He currently works for BVH’s Learning Center program that is set to be eliminated in the 2020-2021 school year, per recent district budget cuts. Currently, at BVH there are around 100 students enrolled in the Learning Center program.

During your time working at the learning center,  what have been some highlights for you as a teacher?

It’s the same thing all the time; getting kids diplomas they never would have got. Kids are about to quit and [say] ‘That’s it!’ and go to the carwash, and they come through here and I remind them ‘No, you’re not.’ Then we work with them as individuals and figure out a plan that works. Up until not long ago I’d never had a kid that didn’t get their diploma. But that changes, you know, because some kids don’t come to school, and I can’t help them if they don’t come to school.

What are the primary differences between Learning Center and other classes?

It’s essentially one class at a time. It’s almost like the professional college model. If you go to National [University] or [University of] Redlands, you take one class at a time. You kind of work on it yourself and your own independent learning skills are primarily the most important that you have and then utilize the resources we have here. That is the difference between main campus where you’re juggling six or seven classes at once. And each one has a different modality, where ours is essentially [that] we’re here to assist you and facilitate you through learning pretty much like an adult would. [If] you want to learn how to do something you don’t go to a classroom, it’s real life. We try to gear the kids towards a post secondary transition or teach them the skills they’re gonna learn when they get out [there].

I think the average [student] would probably come [during] second semester [in] 11th grade. They probably do about three semesters on average.

Generally what kind of circumstances in students’ lives lead them to come to the Learning Center?

It’s everything, it used to be just credit recovery. It used to be you fell behind on credits because you [went to] the hospital or something like that. But we get kids that are socially-emotional[ly struggling]. We get these kids that are absent from school for a variety of reasons. You could think of why they would be absent from the main campus. We’ve had kids that are pregnant, we’ve had kids that were raped, we’ve had kids that are transitioning sexually, seriously anything you can think of. We have a kid that just came in from out of the state and their credits don’t triculate, you’re all of a sudden thirty credits behind. ‘How’d that happen?’ Their parents moved a lot or they’re homeless, we get every single one of those; foster kids that bounce around, kids out of juvenile corrections, we get absolutely every circumstance, not [just] credit recovery anymore. We’re alternative education, we are not credit recovery any more. We do have kids that come here for that specific reason, but that’s not why we’re here. That’s why it’s called [Alternative Education] (Alt Ed), we get everything.

Why did you choose to teach in learning centers?

When I first started teaching [within the SUHSD], I was only doing Learning Center for a block. It was a two hour set that I used to do at Chula Vista [High], and then the rest of time I was doing fundamentals. I was teaching math and reading [and] it was great. I liked them both, I saw the differences in both. One was helping kids get on track, so they could continue [to use] those skills to get through high school and life and the other one was ‘Well, okay, that didn’t work out, so let’s try and get you a diploma.’ It came up that we needed more hours of Learning Center. [With Learning Center] I feel like I’m more effective; I feel I can use my personality better, I can work with the kids and they know I care, they don’t fight me, they know if I tell them something it’s for a reason, I’m not just joshing them or messing around. We built that respect and rapport and that’s why I’ve always been good at it. That just became my teaching preference and probably my strength and [I] definitely found my calling.

There’s some key aspects that are not spoken about that are not public knowledge because it’s somehow not really [coming] out. The Learning Centers actually regenerate money by how the kids do. If the kids do well here, they not only graduate and get their credits, they also generate what’s called [Average Daily Attendance] (ADA). ADA has to do with how much you get paid.

The difference is we only have 40 people total that work [in] all 12 Learning Centers total [in the district]. [A] vast majority of those 40 people can actually collect ADA [fees]. And that’s 1300 students; 40 people for 1300 students. If we get just decent numbers like 80% or so [of students bringing in ADA payments] we are actually paying our own salary. This program in other words, doesn’t cost anything. It’s basically free. You have teachers that basically work for free. That ADA goes and covers that program, and it kind of ties up all those loose end-kids that they can’t help. The [SUHSD] board doesn’t care about that, or the board doesn’t understand that or they have some kind of vendetta. When you look at the numbers, we are throwing kids on the street corners that don’t have anyplace else to go.

This is the key issue also: we have nothing to offer these kids. Here’s what’s gonna happen: we’ve got 11th graders that still need 20 credits. What are we going to do with that kid? [We will send them] back to main campus [and say], ‘You’re still not going to graduate but we still hope you stick around!’ It’s not going to happen. Meanwhile [the SUHSD administration is] crying that we are losing kids to charter schools. Where else are you supposed to go if you’re behind on credits?

You probably know kids who got stuck on Independent Study (IS). Anyone ever say that was awesome? Not one kid. It’s because it’s someplace you go when there are no other options, it’s the last option. Over the years we used to call it the hole we threw students into, because we don’t know what else to do with them. These kids end up going to the last option and they have a perfectly good option right here. Not to mention, IS as it is now is not large enough to cover 1300 kids. So it would have to double the amount of teachers.

How about we send [kids] back to main campus—the environment that didn’t work for them in the first place? All the social-emotional kids, well, they’re gonna drop out. But this is about budget at this point. If we have kids that we cannot offer a Free and Appropriate Public Education (FAPE) opportunity—every single student has to be offered that—you are going to be sued. That is not an appropriate placement for that child, we have nothing else. And we have 1300 kids here, I’m pretty sure we can probably gather about 50 parents that are super pissed, that are going to sue. Through litigation, we’re going to lose money because this has happened so suddenly [that] there’s nothing else that you could put [Learning Center students] in. It’s not going to cover anything legally.

Why would you want to kill a program that generates money and solves problems for 1300 kids at a time? That doesn’t make any sense, especially when we have no solutions. [Learning Center teachers] are just going back to main campus, we’re not getting fired and we make a lot of money. So you’re just putting us back on the main campus, so we’re not getting paid any less. They’re just making this look like there’s a reason why we had to send [low seniority teachers] home, when the reason is because they can’t manage money to save their lives, because they are criminals, between you and me and everyone who can read. If you’re in that [administrative] position, you’re making that kind of money. Are you ever going to vote that kind of money out of your pocket? Of course not.

We have kids right now that are crying [and] freaking out. They don’t know what they’re going to do. I have a kid right now trying to get 20 credits in a few weeks and well, it’s not happening. You can’t do that. We’re taking away a program that’s run for 35 years [which is] pretty trippy.

I have [had] a long, intrinsic knowledge of this community and how this thing works for my entire life, basically. When I speak of this, I know what I’m talking about. And so [the SUHSD administration] apparently do not, because they don’t care.

At the board meeting, several people spoke and stated that the district is going to impact the most vulnerable students. Would you agree with this statement?

Of course. The most vulnerable kids, they come here. We have ones on main campus that are vulnerable, but they have a support group there, that’s for them and it’s not gonna disappear. Here, [Learning Center students] are the ones that [the support groups on main campus] couldn’t even help. They came here because there’s no other step from here. [The] next step is not IS, they’re not gonna help the vulnerable there either. They’re doomed. They’re stuck there. They can try to help make it work with things, but the fact that [the main campus] model alone is what drove them here in the first place, how’s that supposed to work? That’s like having a fear of werewolves and werewolves are trying to comfort you. It’s like, ‘It’s not working!’

If the kids are going back [to main campus, they will be] behind in credits; they couldn’t handle [a] six period day and now they need a seven period day. We only have one continuation school and it’s full and their enrollment policy is crazy. It takes like two months to get in.

Can you describe how you felt when you found out the resolution was passed?

Well at first it’s kind of like ‘You gotta be kidding, right? This is a joke, right?’

They have to come up with something that makes more sense. They have nowhere to put these kids. When they told us that that was going to get absorbed into other programs, we were like ‘We know this program. You can’t [eliminate the Learning Centers], unless you want to give [the other programs] more employees, which is what we [Learning Center employees] are.’

My seniority means absolutely nothing. We [Learning Center teachers] get kicked to the bottom. Our pay gets kicked and we get kicked in the teeth, all kinds of kicks. And [we’ve] just got to smile through it. And that’s 100 percent totally unfair. We don’t even know where we’re going. So we’d have to move, might not be this site, [there is a] very good chance it won’t be.

[It’s] the kind of stuff you see on the news, right? [The topics that] documentaries are on. 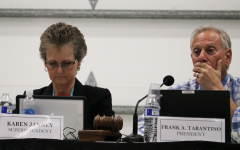