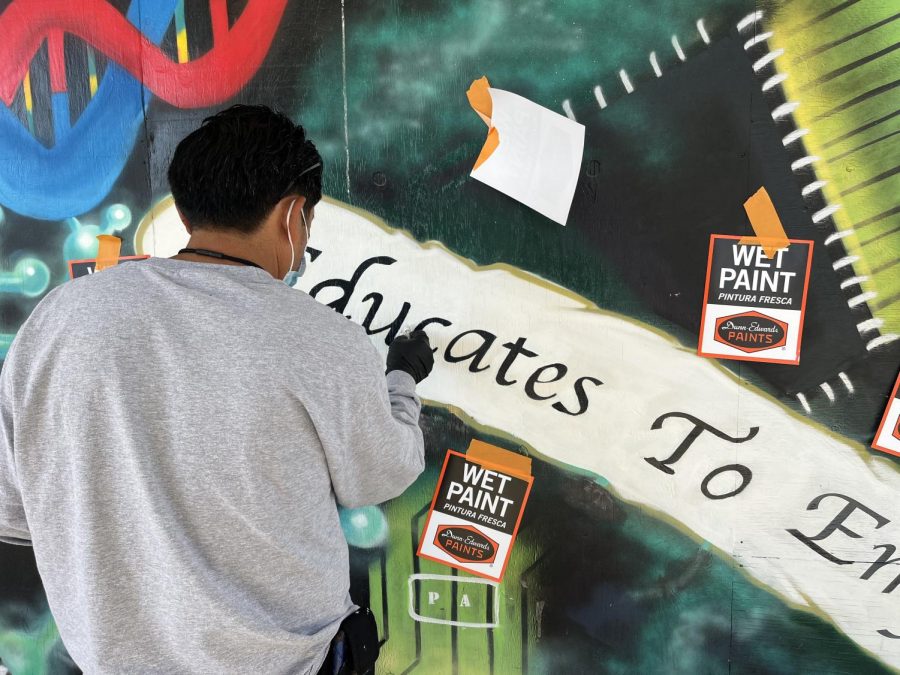 Sweetwater Union High School District (SUHSD) dispatch worker paints over the graffiti in attempt to restore the mural to its original state. SUHSD was called early in the morning on Nov. 1 to fix the damage done to BVH.

“I’m not going to stop until it’s done”

For a few Bonita Vista High (BVH) students, November was a memorable month. On Nov. 1, Sweetwater Union High School District (SUHSD) workers covered up vandalized murals and classroom doors. The Chula Vista Police Department (CVPD) was also called down to BVH due to the anti-semitic and homophobic nature of the graffitied walls.

The CVPD later wrote a press release that an estimated 1,600 dollars worth of damage was done to the school. Following a media announcement on the fact, a press conference was promptly organized by City Councilman Stephen Padilla in response to what the CVPD had labeled as a hate crime. Speakers that ranged from Chula Vista council members to San Diego Pride executives and Rabbis attended. They spoke against the hate presented at BVH. At the press conference, SUHSD Board President Nicholas Segura gave a speech condemning the said acts and answered questions on preventative measures.

A week later on Nov. 10, Israel Club President and senior Anna Maya held a student response against the hate-vandalism at BVH; she wanted to put a stop to it. Approximately 50 students attended the student-organized workshop called ‘Spread Love Not Hate.’ All students worked through their lunch period to create posters that shared the message of love.

It’s relieving to think that it’s an ignorant act rather than a hateful act, that’s a really key point because if we lived in a hateful society, then I’d be scared. But I’m not scared. These incidents, drive me more to the change I want to see in our community.”

“Initially, I didn’t want to put my face out in the open as President of the Israel club [and a] Jewish student because I didn’t feel safe within my own school to do that,” Maya said. “The least I could do is spread awareness about it. Maybe if someone saw a neon yellow poster on the hallway saying ‘spread love not hate,’ that would raise questions.”

Maya did not hear of the anti-semitic and homophobic vandalism until the following Tuesday and shared her dismay over the situation. Not many students are aware of the fact that their school campus was vandalized or that a press conference had taken place during third and fourth period. In order of events, there was the vandalism itself, city council members’ response and then a student response. The BVH administration has not shared a response of their own. 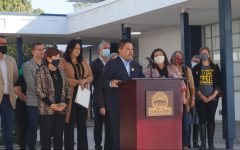 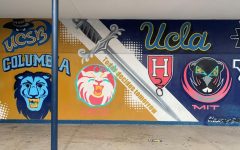 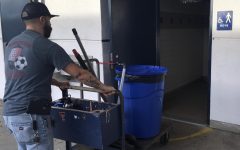 “I appreciate the administration for taking it down so fast, because it’s not easy to get graffiti down. I was a little disappointed [as] it [the issue] was just kicked under the rug. This is prejudice. This is hatred. This is anti semitism on high school campuses,” Maya said.

Her discontent ran deep considering the rise of anti-semitism reported by the Federal Bureau of Investigation (FBI) despite the Jewish community being a minority in the United States. The most recent FBI report stated that out of 1,715 victims of religious hate crimes, 60.2 percent of them were ‘anti-jewish’ aimed.

“I was deeply disappointed by the antisemitic and homophobic nature of some of them [graffiti] and it’s hard to know what was going through the minds of the vandal or vandals. If it was some type of Halloween prank, I think it was completely inappropriate,” BVH Principal Roman Del Rosario Ed.D. said.

Maya recounted a similar story where family members told her that they had never experienced hate vandalism at BVH. She fears that anti-semitism is now on the rise and has thought of many ways to prevent the spread of it. She proposes a revision of the hate-crime section in the code of conduct because it’s “outdated.” Going further, Maya wants a formal response from the BVH administration to the student body and plans to go to the district to pass a resolution that would result in severe consequences for students who perform anti-semitic acts.

“I would like to believe that we live in a world full of ignorance, rather than hate. That’s a relief to me because combating ignorance is much easier than combating hate,” Maya said. “And by ignorance, I simply mean a lack of knowledge.”