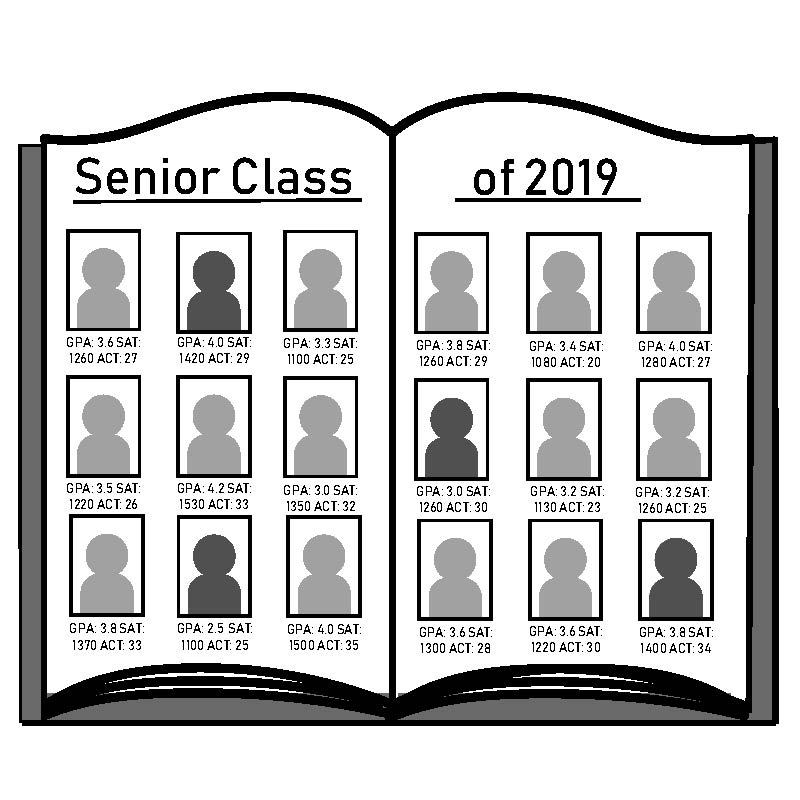 At some point in a student’s high school career, numbers like these flash before them on a computer screen after they log-in to their College Board account or upon receiving a copy of their transcript. For some, the response is an excited grin or a sigh of relief—but for others, it’s disappointment.

Regardless of the type of reaction, all students, especially seniors currently applying to college, inevitably become a number of fewer than five digits. According to the Atlantic, for many colleges’ admissions processes, students’ scores and GPA are first run through an algorithm to determine whether or not the rest of the application will even be read.

Yes, these statistics can tell us a little about a lot of people, but they fail to tell us a lot about a single person.

In many ways, the most problematic cause is standardized testing, which is no stranger to modern-day students. In fact, the Washington Post estimates that by the time students graduate from high school, they will have taken an average of 112 standardized tests. And while the resulting scores can be helpful tools for educators, many experts agree that such tests do not adequately measure individual students’ intelligence.

According to a study conducted at Bates College, there was a statistically insignificant difference in educational outcomes for students who scored well on standardized college entrance exams and those who did not. Specifically, those who scored well bested their lower-score peers by only 0.05 percent in terms of college GPA and 0.6 percent in terms of college graduation rates.

Standardized tests have also been known to contribute to stress, with test anxiety affecting 38 percent of students nationwide. The Anxiety and Depression Association of America states that, consequently, the typical reactions to test results are feelings of disappointment, anger, helplessness and fear—unsurprising in a society where students’ statistics seem to have so much weight over their futures.

Something similar can be said for GPA, where many students choose to take classes simply because they are weighted in order to maximize their statistics.

Thankfully, many institutions understand this and have added essays to their application processes in order to review students “holistically,” beyond GPA and test scores. Sadly, even here, the numerization of students is inescapable.

In a video examining Stanford University’s admissions process, Solomon Admissions Consultant Dan Lee breaks down the three scores assigned to students based on scales of one to six: an academic rating, an extracurricular rating, and an intellectual vitality rating. The last two convert all of the soft, personal information explained in applicants’ essays into a one-digit score. As Lee further explains, this process in the college admissions game isn’t rare.

Understanding why institutions do this isn’t difficult—they need a system to be able to compare a diverse pool of students against each other, and numbers are the easiest tool for direct comparison.

But somewhere down the line of the admissions process the applicant is forgotten. As each piece of quantifiable data is entered into their algorithms, the institution is no longer accepting the student, but the set of numerical values that are squeezed out of them.

Fortunately, many institutions have taken steps to become less focused on statistics.

Over 200 colleges and universities nationwide have made test score submission an optional part of their applications, a growing trend with even highly competitive schools like the University of Chicago participating. While still not completely throwing numbers out the window, admissions professionals are realizing the lack of depth that comes with hard data-driven processes. Hopefully, the future holds similar changes that emphasize the student over their statistics.

In doing so, the 1260 SAT, 27 ACT and 3.6 GPA student becomes a lot more interesting, and the college admissions system a lot more human.