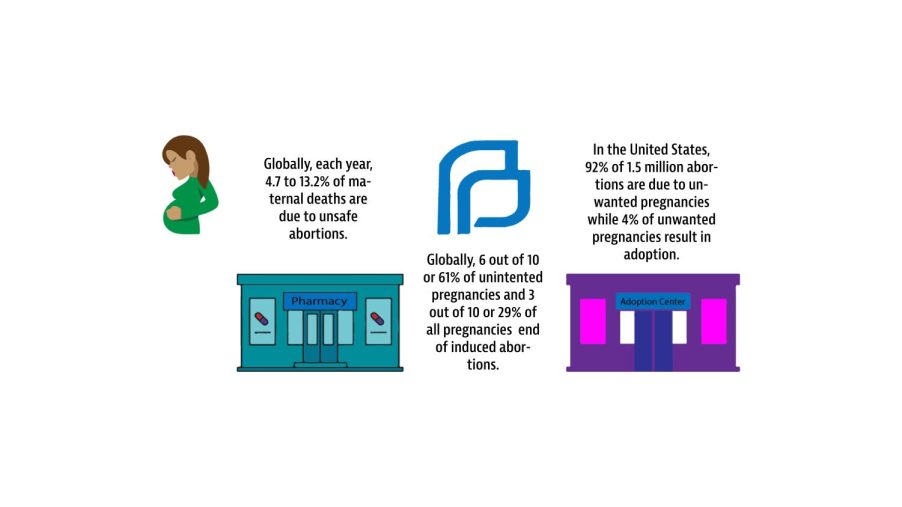 Data collected from the World Health Organization and AIM Adoptions.

Overturning Roe v. Wade will be a mistake

In 1973, “Jane Roe”, an alias for an unmarried pregnant woman, won her filed case to terminate her pregnancy legally and safely. The case famously became known as Roe v. Wade, which is known for the United States (U.S.) Supreme Court’s decision to legalize abortion. The decision recognized a woman’s constitutional right to privacy when terminating their pregnancy. Roe filed the case due to the restrictions made by Texas state law that made it illegal to perform an abortion unless the woman’s life was at stake, according to the article “What the end of Roe v. Wade would mean for Texas’ past, current and future abortion laws”.

Henry Wade, an American lawyer in Dallas, Texas, was in contradiction with Roe. In the article “Defendant Henry Wade’s Brief in Roe v. Wade”, Wade argued that “a woman’s right to privacy is not as important as the unborn child’s right to life—and that states have the right to regulate abortion in order to protect the life of the unborn child.” Eventually, the Supreme Court’s decision concluded with a 7-2, where they declared that “a woman’s right to abortion falls under the constitutional guarantee of privacy”.

Overturning Roe v. Wade will be a mistake

On May 3, a draft from the United States (US) Supreme court was leaked detailing that the court would strike down Roe v. Wade, the landmark case that gives women the right to an abortion. With Roe v. Wade under a threat, public outcry slept the streets across the country. Women and allies protested their discontentment for the overturning of this crucial case in American history. If Roe v. Wade gets overturned, it will have immense negative ramifications for any person with a uterus and become an ultimate crime against democracy.

With a conservative dominated court, three of the judges being nominated by former President Donald Trump alone, the possibility of Roe v. Wade being overturned is unrepresentative of the majority of the public’s opinion on the case. According to a poll conducted on May 13, by NPR, “nearly two in three Americans oppose overturning Roe v. Wade”. In a democracy, the decisions are made by the consensus of the people. But, the opinion to reverse Roe v. Wade is not representative of nearly two-thirds of America’s opinion today.

The intention of the Supreme Court is that they are tasked with interpreting the constitutionality of laws and serve for life to not be influenced by public opinion. However, Roe v. Wade set a precedent on a women’s right to an abortion under the 14th amendment, right to privacy.

According to University Missouri-Kansas City, “The Supreme Court has broadly read the Fourteenth Amendment to guarantee a fairly broad right of privacy that has come to encompass decisions about child rearing, procreation, marriage, and termination of medical treatment.” Under this constitutional amendment, women are allowed to make decisions about their own body.

If Roe v. Wade is overturned then “26 states could quickly move to ban abortion” which means that “36 million women” could loose their access to safe abortions, according to Planned Parenthood. Women in over half of the US states will lose their right to an abortion meaning if they wanted or needed an abortion they would need to travel outside of their state, such as to California, which can be costly and in some cases unobtainable.

According to the data presented in Kaiser Family Foundation, as of 2019 Black and Hispanic women make up 59% of the women obtaining a legal abortion. This indicates that if Roe v. Wade is overturned, it would disproportionately impact people of color. Furthemore, according to Pew Research Center, 56% of the Black population in the US lives in the South, which is where the highest concentration of states pursuing restrive abortions laws are.

Furthermore, illegalizing abortion or restricting it will not prevent individuals from performing abortions, however, will only stop safe abortion procedures. People will continue to find ways to get this service done with the risk of negative health effects. According to the World Health Organization (WHO), “Unsafe abortion is a leading – but preventable – cause of maternal deaths and morbidities.” Unsafe abortions can have mass amount of negative effects of people with uterus’s health such as “haemorrhage, infection, and uterine perforation.” By having access to safe abortions, these health effects can be mitigated.

Additionally, “Each year, 4.7–13.2% of maternal deaths can be attributed to unsafe abortion. Six out of 10 (61%) of all unintended pregnancies, and 3 out of 10 (29%) of all pregnancies end in induced abortion,” according to WHO. With the majority of unwanted pregnancies resulting from abortion, it is a crucial procedure for women to have access in case they ever get in that position.

Ultimately, if Roe v. Wade is overturned it will be harmful to millions of women across the US and its impact will spread across all states no matter if they are restricting abortion or not.”

Furthermore, a claim many on the side of opposition to abortion make is that the unwanted children can be put up for adoption if the women cannot provide for said child she is forced to have if Roe v Wade is overturned. However, according to AIM Adoptions, “92% of the more than 1.5 million abortions that are performed in the United States each year are the result of unwanted pregnancy and less than 4% of unwanted pregnancies result in adoption”. This means that the opposition claim does not hold true since almost all children born from unwanted pregnancies do not go to adoption.

Ultimately, if Roe v. Wade is overturned it will be harmful to millions of women across the US and its impact will spread across all states no matter if they are restricting abortion or not. In order to take action, students at Bonita Vista High can protest, educate themselves on the issue and if eligible vote for members of congress who undoubtedly support Roe v. Wade.