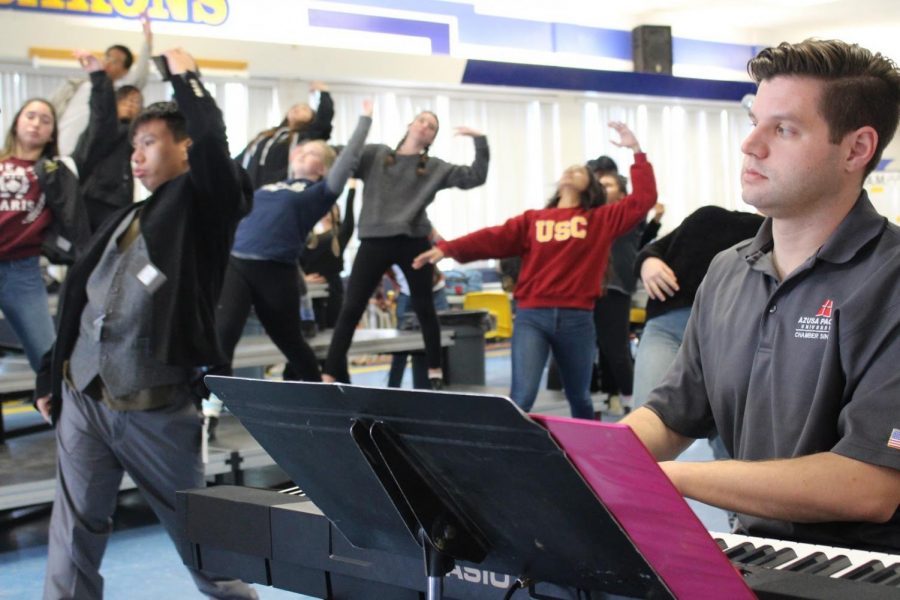 A sound from the world to Bonita Vista

Klein assumed his role as director at BVH this semester, bringing years of experience in school-based show-choirs and instructing music curriculums.

“Bonita has an amazing history of fantastic music that I wanted to be part of. From my perspective, they sound very strong and I think it’s been really good so far,” Klein said.

In college, Klein travelled across the world with the Azusa Pacific University choir, the Chamber Singers. This included a performance for Charles, Prince of Wales at Llangollen International Musical Eisteddfod in the United Kingdom. After college, Klein went on to be a high and junior high school music teacher for three years, eventually finding himself at BVH

The position became vacant following the retirement of former VMD instructor, Gail Kennedy, who had been instructing at BVH for 6 years, leading the Barons to various awards including first, second and third placings at the 2018 Festival Season.

“Although [Mrs. Kennedy] is no longer teaching us, I know she’ll always believe in our abilities to do our best everytime we compete,” Lady Tones class president, Laryssa Kure said. “I honestly don’t think any of us will be impacted by this change. Everyone should be open to new things.

Klein officially began his job on Jan. 25, while Bolles Theatre was closed and VMD rehearsals were relocated to the cafeteria. While many students recall problems with the absence of mirrors for dance recitals and the noisy nature of the area, Klein didn’t see an issue in this change of setting.

“I can practice anywhere. As long as we’re able to make music, [it] will be great,” Klein said, “[The VMD] is doing a great job [in the cafeteria]. They’re adapting to being in a new place and I’m excited to hear them [sing].”

In order to add music into the VMD’s lineup, Klein states he has to have a set schedule ahead of rehearsals. He explains his process as first, color coding a notebook filled with sheet music based on parts such as volume and then playing the pieces on his piano.

He hopes to implement various genres including gospel, pop and Broadway showtunes. He states his favorite piece is the gospel, “Down the River to Pray” by Alison Krauss.

“Mr. Klein brings a lot of energy to the room. I can tell he’s a very nice mentor who respects his students and colleagues,” Kure said.

Sound Unlimited technician, performer and senior Gio Castillo describes how Klein’s vocal range reaches both low and high notes, enabling him to sing at Soprano, one of the highest musical notes. This, she states, enables him to instruct pieces without a piano and allows students to learn ballads based of hearing.

“[The VMD] is able to come together as a unit and there hasn’t really been any problems working with [Mr. Klein]. He’s been a good director. It’s easier to get along with a good director rather than someone who is just there for the job,” Castillo said.

With the Festival Season starting on Feb. 15, both Kure and Castillo are optimistic towards Klein’s abilities and role as the new instructor.

“I love being part of the music-making process and I love being with passionate people,” Klein said. “We all have the same vision that the [VMD] needs.”