What lies beyond the Earth’s atmosphere in the limitless void that is our universe has always been a wonder. Curiosity strikes, theories and theses are formed. The excitement spreads, bringing forth communities with a common interest. At Bonita Vista High (BVH) the Astrophysics Club was founded by seniors Isaac Broudy, Carlos Ram 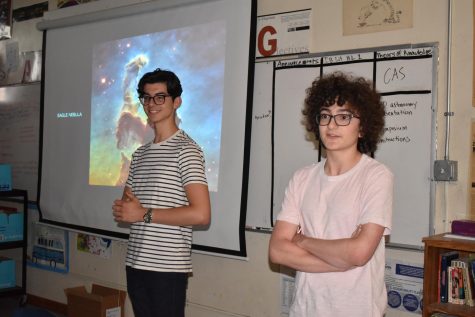 Efren Mendieta
BVH seniors Isaac Broudy and Carlos Ramos present the Eagle Nebula to fellow classmates. They do this during their seventh period Theory of Knowledge class.

os and Adam Benchekroun, forming their own community with a mutual goal.

Since the club started around two year ago, it has undergone a gradual shift in purpose; from the initial aim of students making telescopes, to its current objective focused on the observation of astronomy.

“We made it about outreach [and] teaching people the importance of astrophysics. Teaching them about the many objects that you can observe in the night sky that you may think are just dots in the sky, or just stars, [but] are actually amazing things you can see through telescopes,” Ramos said.

According to Broudy, the idea for an astrophysics-related club was initially developed in his sophomore year, but it also stood as an approach to participate in the International Baccalaureate (IB) Program’s Creativity, Activity and Service project (CAS). The concept of the Astrophysics Club reached the necessary criteria for the CAS project while still maintaining the appeal of astronomy for the students.

“From a really basic standpoint, it was just a need for a CAS project, but furthermore I wanted to investigate planets and I wanted to get into using telescopes because it seemed like a very interesting hobby to develop at a young age,” Ramos said.

The importance of an Astrophysics Club has been emphasized by Broudy due to the scarcity of courses based in astrophysics or astronomy here at BVH. The club provides students with the opportunity to further expand their passion for astrophysics while also creating a welcoming environment for students who consider themselves new to astrophysics.

“I think that we should be open to accepting all people interested and we should really try to not only teach astronomy, but it should be an environment that people who like astronomy can go to practice astronomy. [They would] not only practice astronomy but be in that environmental community of people who like astronomy and have similar interests, because being surrounded in that community really allows you to grow in those senses,” Broudy said.

The club has expressed the desire to sustain a stable level of new members in order to fulfill the promise of giving BVH students a new opportunity towards firsthand experiences with astronomy. When these new members take it upon themselves to partake in the club, it can lead to an engaging experience that increases the effort to bring out the best in astrophysics for the club.

“[In] our outreach events, we invite fellow BVH students to come and use telescopes and we use a variety of astronomical objects. We try to provide facts on both the equipment being used and what’s going on with the objects we’re looking at, explaining the features of those objects and the astronomical facts and sort of basic fundamental of astronomy,” Broudy said.

According to Broudy, there has not been any difficulties regarding attracting members to the club.

“We haven’t had any big struggles in that aspect. I’m kind of happy that there’s a wide interest of people who would like to participate in these events,” Broudy said.

In addition, Broudy feels comfortable in the amount of people coming to the club. He still establishes that his overall goal is to spread the interest
of Astronomy throughout BVH.

“In the future we’d like to have more events and [we] had wanted to do a formal event where we invite all BVH students or at least a large amount of students to attend a public star gazing event. That would be in the future, but we would need a lot more funding to do that. Overall, our goals would be to do more outreach events and provide more services to the BVH community,” Broudy said.

Hopeful of the goal in mind and reflecting on the growth of the Astrophysics Club, Ramos smiled proudly while speaking about the friendships he had already established through the club.

g those moments together looking up at the stars […] it’s a small community, [but] we have a strong bond. It’s fun to roast each other while helping each other out,” Ramos said.