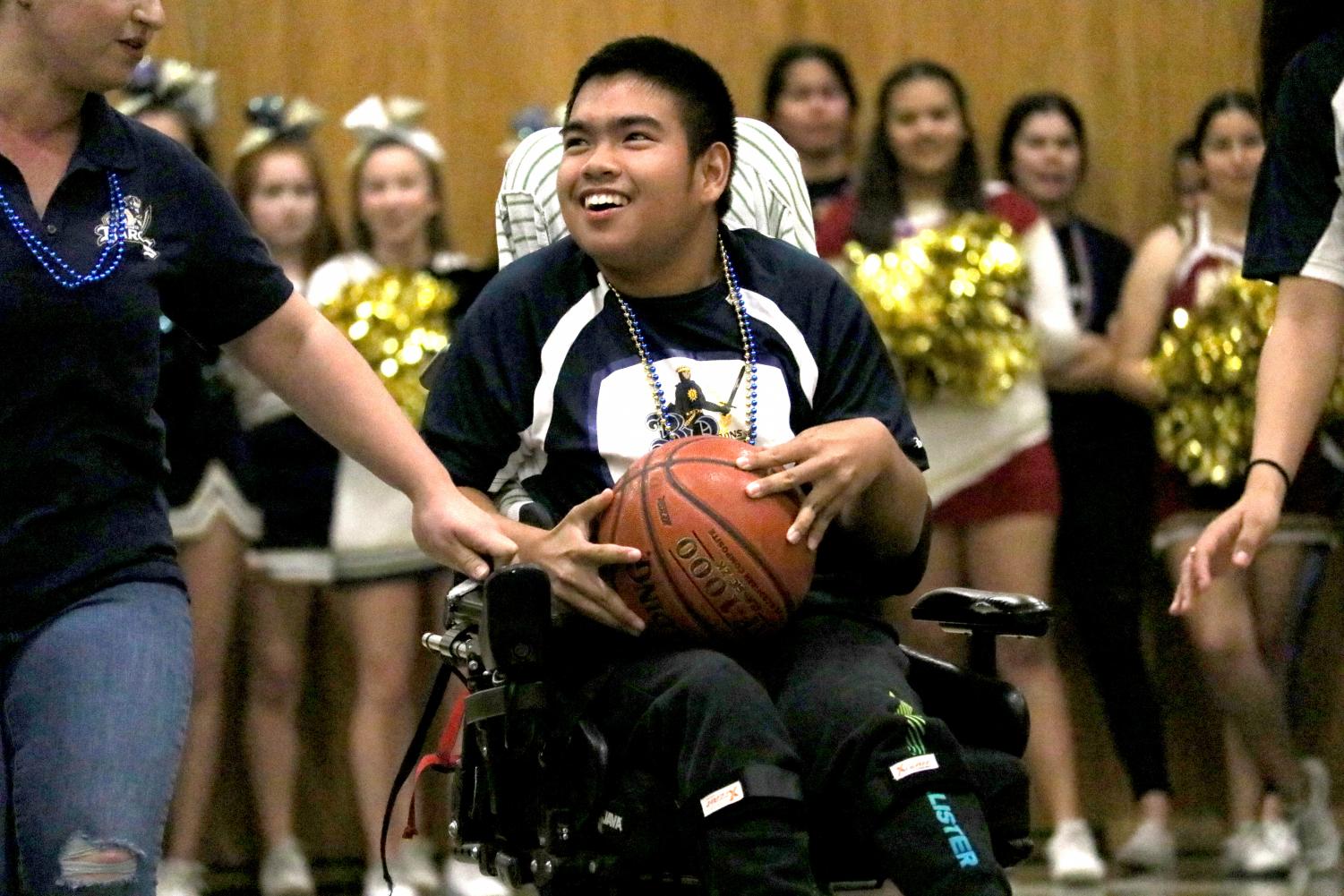 Senior Charlie Peterson receives a pass of the basketball on Mar. 5 at the Unified Basketball game. Cheerleaders from both Bonita Vista High and Southwest High cheer on the Unified teams of Special Education and General Education students from both schools, (Madison Geering)

Senior Charlie Peterson receives a pass of the basketball on Mar. 5 at the Unified Basketball game. Cheerleaders from both Bonita Vista High and Southwest High cheer on the Unified teams of Special Education and General Education students from both schools,

From Baskets to Bridges

“It was amazing. I loved that the whole gym was full of students. The cheer teams [from both schools] were there. The band was there. Everybody was cheering – it was just such a fun, special day,” BVH Speech Language Pathologist Jenna Kalfayan said. “The whole school came out to support the students that were playing and I thought it was awesome.”

Basketball is not the only sport that BVH has Unified games for. The school also participates in Unified soccer and track, hosted at Southwest, Hilltop and Olympian High. In preparation for the basketball game, BVH Adapted Physical Education Teacher and Coach of the Unified Basketball team Colby Long helped to coordinate several after school practices.

“My goal is to help [students] find success in whatever it is we’re doing. So if it’s basketball, [we want] everybody to at least make a basket,” Long said. “Everyone is a part of the team. Everyone is having fun. Everybody feels like they belong.”

At the Unified Basketball game, the BVH band Club Blue played from the bleachers, BVH and Southwest High cheerleaders cheered and the BVH Get to the Pointe (GTP) Dance Company performed a halftime show. Any students who wanted to watch the game were excused from fourth period to support the players.

“It’s pretty cool to see that the school has a lot of spirit and that we can all get together [and support each other],” sophomore and Southwest High cheerleader Karina Guzman said.

Associated Student Body (ASB) Advisor Christopher Alvarez organized the entirety of the event with the ASB, calling for the help of the members to make it a special day. Assistant Principal Carlos Siragusa and English teacher Carmen Ramirez-Stokes participated in the game as referees, and several other staff members attended to support the students.

“I think it goes to show that everyone can come together and support each other. Many different aspects of BVH were involved in creating that atmosphere,” Kalfayan said. “And to me, it very much created a sense of community on the campus, which is beautiful and wonderful to see.”

Unified games have both General Education and Special Education students play side by side. In these games, the score is not focused on; the main focus is the culture created by the community that rallys in the stands.

“[Unified games] are very important because they make [Special Education students] feel like they are part of the community. It makes the General Education kids understand and embrace them as part of their community; as their own,” Spectating parent Sysaias Torres, who was watching his son Sysaias Torres Jr. at the event, said.

Long agrees that the creation of an accepting and supportive culture is the purpose of events like the Unified game. He mentioned the story of one student in particular, who had just moved to BVH; their parents came to watch the game and support the team.

“After the game, the [new] student said that it was the best day of his life. That really stands out to me; the fact that he had so much confidence after that game,” Long said. “I feel like I got to play a small role in helping him feel like this is home, like this is his community now.”

Those involved certainly believed that the Unified basketball game lived up to its name, serving as a unifying force for the school community. Whether it was the teacher volunteers helping to run the game, the students cheering in the crowd or the Unified players’ smiles when they received the ball or made a basket, the positivity in the air was reflected in the people there.

“The overall goal is promoting friendship. Sports is just one of the ways that we allow for that to happen. We use Unified sports as a way for us to celebrate our similarities, as General Education students and Special Education students,” Long said. “We’re a family and community; everyone belongs. I think what we saw at our game shows how much support and love that this whole school has for each other.”