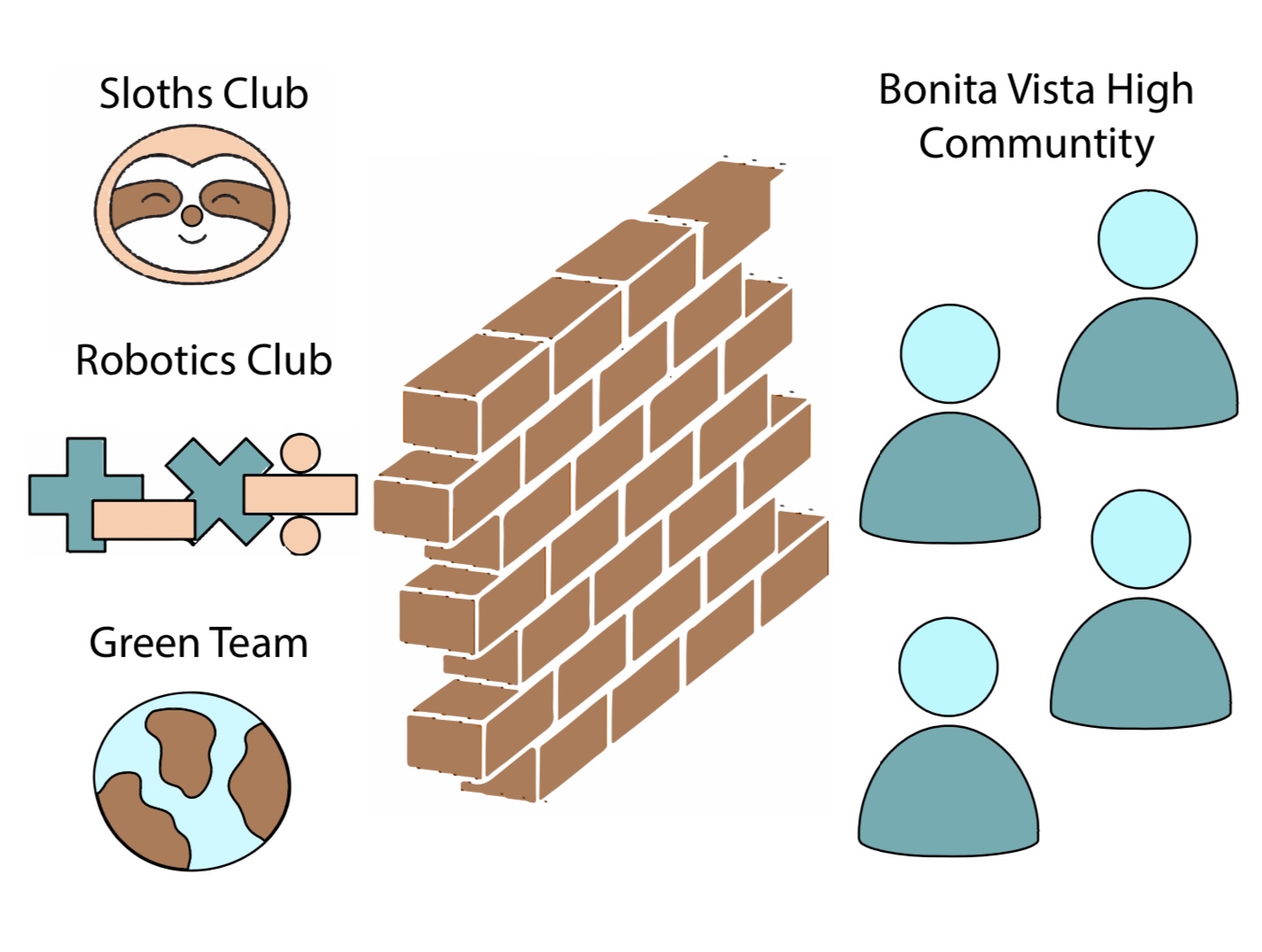 BVH clubs have been unable to pursue activities due to the COVID-19 pandemic, including fundraisers, competitions and public artworks. (Laurinne Eugenio)

BVH clubs have been unable to pursue activities due to the COVID-19 pandemic, including fundraisers, competitions and public artworks.

Clubs are a place where individuals can meet and share similar interests while surrounded by like-minded people. Students at Bonita Vista High (BVH) participate in clubs ranging from the Green Team, to the Robotics team, to the Sloths Club in order to share the interests they have in common. However, with the stay-at-home orders in place, the clubs were forced to shut down, losing the ability to meet up with their club mates and learning how to stay in contact while at home. The clubs have pursued multiple endeavors to try and keep their passions alive.

The BVH Green Team is a club that meets in International Baccalaureate (IB) Environmental Systems and Societies SL, Advanced Placement (AP) Environmental Science, AVID teacher and Green Team advisor Jennifer Ekstein’s room and is led by a few BVH students that care about the environment and hope to help the Earth and community through projects big and small.

“It was fun organizing events to get our school body more involved with their community, but I also miss our smaller projects such as the making of the living walls and the upkeep of the school garden,” Green Team secretary and senior Catherine Nixon said.

The Green Team has previously attempted to raise environmental awareness by trying to organize a new event involving planting and making more living walls at BVH for Earth Day which was on April 22.

“We were planning some ideas for an event [to celebrate] Earth Day and a few [projects to do] some landscaping in front of the school, but it sadly does not look like any of it will get done soon. So I hope next year’s Green Team will do great things with what we left for them once I and the other seniors are gone next year,” Nixon said.

The Green Team, when faced with quarantine, had many issues arise with trying to communicate with one another.

“I mostly miss having something purposeful to do. It felt good leading a club and doing something I care about. Now it’s very boring just being at home,” Green Team President and senior Lillian Landre said. “We have a group chat so I could [communicate with the rest of the group] if I wanted to. We don’t have anything Green Team related to talk about right now though [because of COVID-19].”

Another club that was impacted by the pandemic was the Sloths Club. The club focuses on the preservation of endangered animals. The Sloths Club itself is an acronym for “Saving Lives Of Threatened Species” and they focus on donating money to the World Wildlife Fund (WWF) by adopting animals.

“[The WWF]  have packages where you can adopt an animal for 55 dollars and they’ll send you a certificate and a stuffed animal to symbolize the adoption all of which can be seen in [AP Biology, Accelerated Biology, IB Biology teacher and Sloths Club advisor Michelle] Mardahl’s [Ed.D] room. The money used to adopt the animal is dedicated towards helping that specific species. We’ve also done group beach clean-ups as a club,” Sloths Club Treasurer and junior Audrey Kunz said.

With the quarantine in effect, it has been challenging to coordinate something the Sloths Club could do with the rest of the club. In the midst of this, they have remained connected online since they are close friends.

“I’ve talked with quite a few members, a lot of them are my classmates and friends. Then when distance learning started up Mardahl reached out to me and we got a forum going on Jupiter with all the Sloth Club members so we can all check up on each other and chat,” Kunz said.

The BVH Robotics team has also faced obstacles throughout this stay-at-home order. Before the quarantine, the Robotics team would compete in robotics tournaments with robots they built themselves. They would then go to the district level to see if they qualified for state or world championships. However, many of the tournaments were canceled due to the outbreak of COVID-19 and the students had to resort to online meetings to talk about their club.

“[The Robotics Team] has a group chat where we most recently discussed the new VEX game that has been released and I have been in contact with, [IB English Literature HL1, Theory of Knowledge teacher and Robotics club advisor Jason] Good, and we discussed plans for the club next year,” Robotics team 751B captain and junior Isabel Caballero said.

Through all the fear, these clubs and many others have been trying to communicate with one another to keep the sense of unity within the club, something that they felt during school, yet are trying to not lose at home.

I feel like I do want to make big changes, have an impact and just leave my mark. I hope that once all [of] this is over, [Green Team] will be able to continue to do great things.”

“I feel like I do want to make big changes, have an impact and just leave my mark. I hope that once all [of] this is over, [Green Team] will be able to continue to do great things at the school and hopefully grow to include more of our students,” Nixon said.