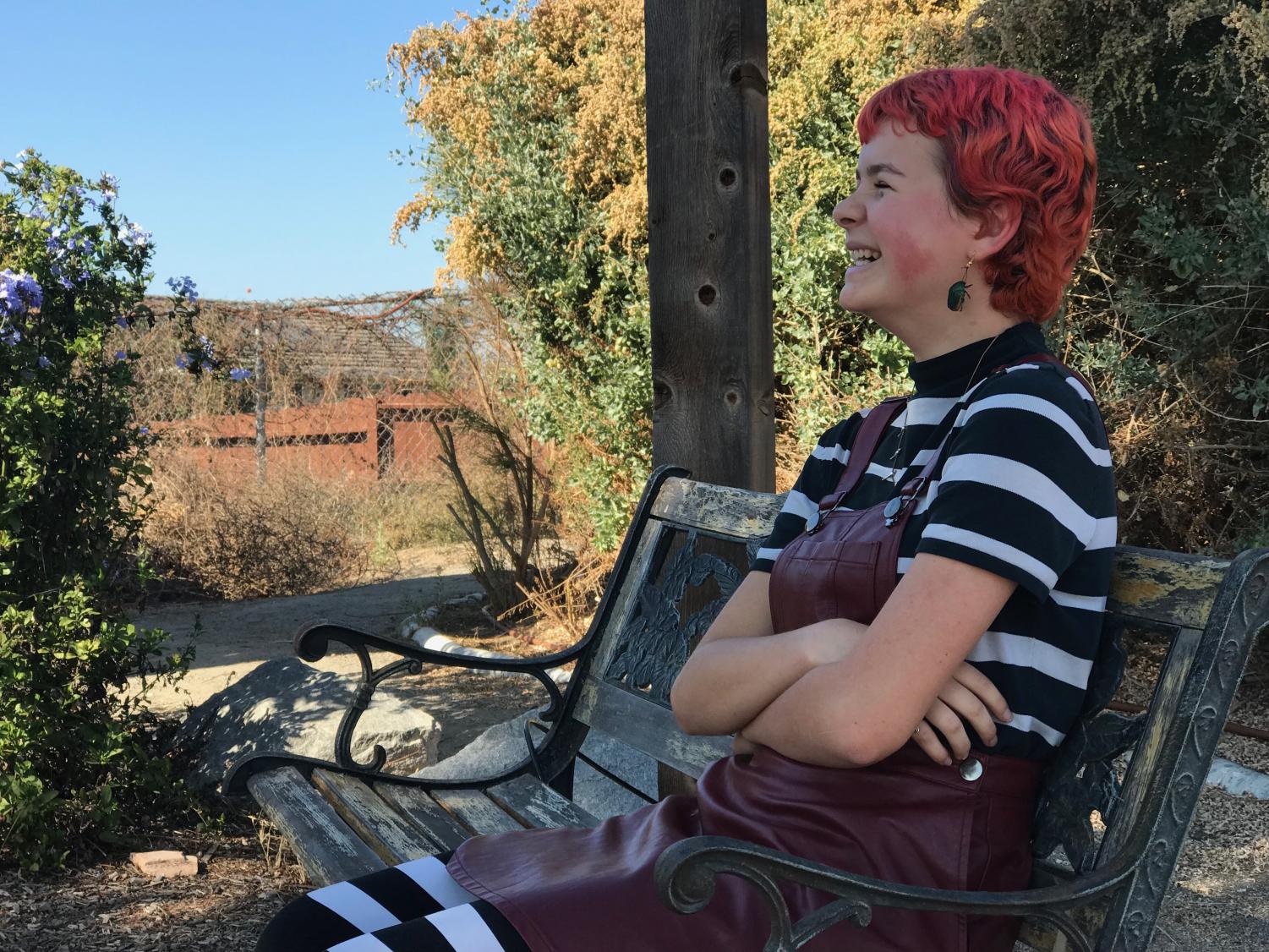 A glimpse into junior Lillian Landre's embodiment of unique fashion

Charlotte Russe, Hollister, Forever 21 or H&M are go-to stores to find the latest trendy clothing. People scroll along the thousands of photos on instagram showing popular styles in hopes to find an inspiration. Expensive jewelry stores are flocked by shoppers looking for the eye catchers and jaw droppers.

However, something you won’t find in these stores is a real junebug. Its leafy-green metallic body and golden underbelly caught the attention of junior Lillian Landre, inspiring her to make an earring out of it.

Landre has collected multiple bugs and insects, converting them into wearable art. Her mother encourages the out of ordinary practices by giving her the bugs she finds in the backyard.

Most of her style is taken from thrift stores that carry a large variety of clothing from different decades, especially from the 1960’s to the 90’s .

“There’s two [thrift shops I go to] called Veterans and they are both really good. [I also go to] less thrifty ones [that sell] second hand clothes,” Landre said.

Letting emotion guide her style, Landre sometimes lets what she feels dictate what she wears that day.

Aside from purchasing clothes at thrift stores, Landre creates her own garments as well. To add her own twist, she often paints on her t-shirts and shoes as well as crocheting items of clothing, to personalize her products.

“I look up a tutorial on how to make something but I change it, I don’t follow directions exactly. I’ve been painting on shirts [and shoes] and I just do it as I go, I don’t really plan it out,” Landre said.

Deriving most of her inspiration from the 1960’s “mod” culture that originated in London, Landre also adds her own flair to her clothing by ripping sleeves, adding patches, sewing buttons and mix matching patterns. Her shoes are painted with unorthodox designs consisting of dots, swirls, sunshine and stars.

The 1960’s “mod” culture famously consists of a cleancut, extravagant dresses and dramatic eye makeup. The “mod” culture was popularized by stars such as Twiggy, Jackie Kennedy, Audrey Hepburn and Jean Shrimpton, who challenged the common dress codes at the time when revealing outfits were frowned upon.

“My first impression of Lily was that she was fearless and a rebel,” junior and close friend of Landre, Ivanna Bobadilla said. “I learned that she is actually a very shy person, very soft-spoken. That has been changing, though, because Lily is becoming more and more confident as time progresses.”

Whether it is cheetah print, rainbow, bright pink or orange dyed hair, Landre’s out of ordinary style draws attention to many students as she roams the hallways.

“[Lily] had blue hair when I met her, but it changed frequently. It was as if she was becoming a new person time and time again,” Bobadilla said.

Landre catches the eye of many around campus with her bright colors, one of which being senior Brianna Arce, who believes clothing allows people to express themselves without speaking.

According to Bobadilla, expressing one’s self through style is an option and something that is fun to do, however it does not define who you are.

“Regardless of having such unique style, I would still see Lily for the person she is, not necessarily by what she’s wearing,” Bobadilla said.

Encouraging others to embrace whatever fashion preference they believe in and to not conform to society’s current fashion trends is Landre’s goal. According to Landre, most people only follow society’s trends to fit in and she believes that is not what fashion is for.

“People will say ‘oh I wish I could dress like you’ and be like ‘different’ or whatever but you can, there’s nothing stopping you,” Landre said.

Landre hopes people won’t be afraid of wearing what they want, she seeks to motivate others to express their emotions through clothing in order to liberate them from the fears of being judged. She seeks to break trends that nearly everybody follows in order to show her individuality.

“I believe in questioning trends and fitting in. People, when they fit in, they don’t actually do what they like. I don’t think it really makes people happy to do what society tells them to do, so I just do what I want because I like it,” Landre said.