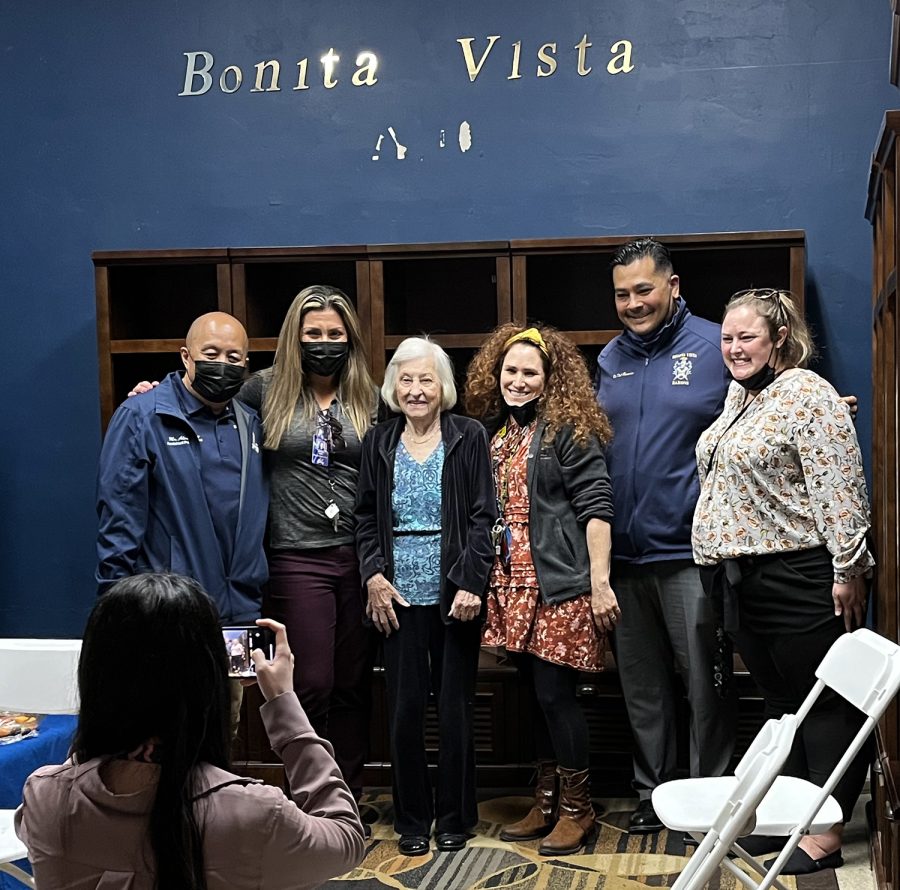 R. Schindler takes a photo with BVH staff that attended her event. Before the event started, she waited in a locker room until all student attendees were situated in their seats.

The gymnasium fell silent as students listened to senior and Israeli Club President Anna Maya and junior and Israeli Club Vice President Esther Turquiekamaji open the event on Thursday, April 21. Shortly after, students applauded as 93-year old Holocaust survivor Rose Schindler was guided to her seat in front of the floral backdrop facing an audience of students.

Schindler first opened the discussion by wishing student attendees a “nice passover” which led into her experience of the Holocaust. While Schindler recounted the memories, photos of herself and her village were displayed on a Smart Board beside her.

“When the war broke out, everything changed,” Schindler said.

Alongside her was Schindler’s son, Ben Schindler, who would chime in to add clarification to his mother’s story. With the help of B. Schindler,  R. Schindler shared memories of her family, her time spent in the Auschwitz concentration camp, her life after being liberated from Auschwitz and how she met her husband and eventually established herself in San Diego.

“You had to have a lot of good ideas to make it in a place like this [Auschwitz],” Schindler said.

Throughout the talk, students laughed at some of the remarks made by Schindler. On one occasion, Schindler relayed the moment that a German Nazi soldier promised to hold her belongings as she boarded a train heading to Auschwitz. She followed this moment by asking students, “You know what BS means?” She evoked laughter amongst the students that reverberated off the gymnasium walls.

“It was incredible. This is the second time I’ve heard a speech from a Holocaust survivor and it  was really amazing to hear her story. It’s one thing to read and to see it on a screen but to see [her] in person is really nice,” freshman and attendee Morgan Murphy said.

As the event came to a close, it left room for only one question for Schindler to respond to. Nonetheless, a student sitting in the row of chairs on the floor of the gym asked; “Even after going to the concentration camp, do you still believe in God?”

Schindler replied, “You have to believe in something.”

Shortly after her discussion, a book signing was held for Schindler’s biography titled “The Two Who Survived: Keeping Hope Alive While Surviving the Holocaust,” written by M. Lee Connolly. Paperback copies sold for 15 dollars whereas hard copies sold for 20 dollars; students and teachers had the opportunity to get their books signed by Schindler herself. As soon as her speech concluded, students rushed to the line to purchase their signed books.

“I wanted to buy the book to read someone’s experience and everything they’ve been through. I think it’s really interesting and important to know about history and what people have gone through,” freshman and attendee Yaxche Morales said.

“I feel so fulfilled and blessed that I was able to give back to my community on something I’m so passionate about. For both me and Anna, this is something that is important to us as Jewish students here at Bonita Vista,” Turquiekamaji said. “I think every person here left with a piece of knowledge and that’s amazing.”